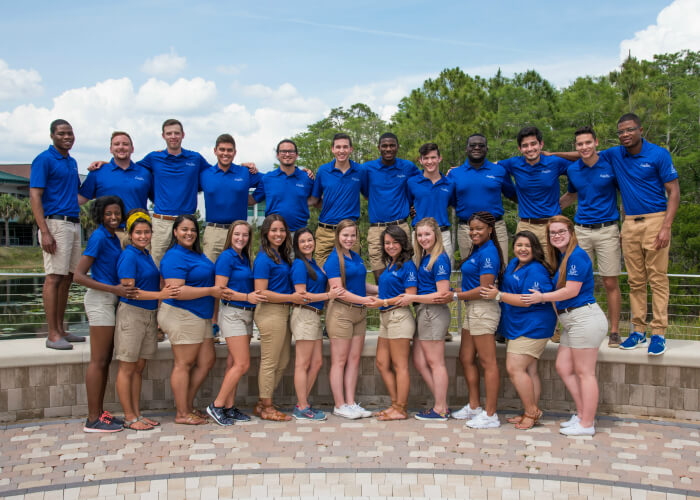 For an Eagle View Orientation Leader, summer vacation consists of living on campus, waking up early and a whole lot of talking.

As an OL, students live, work and even play on campus for the duration of summer break. Working under the Office of New Student Programs, OL’s serve as the first bridge between incoming students and the university. Because of this, freshman are often highly impacted by these mentors, who are responsible for teaching their students everything and anything about FGCU, from how to register for classes to where to buy textbooks.

For sophomore anthropology major Skyler Silva and junior health science major Victoria Clayton, the impact made by their OL’s was great enough to inspire them to become OL’s themselves.

“It was just kind of one of those things,” Silva said. “I really enjoyed my OL and the experience he gave me.”

He had served in leadership positions before prior to entering FGCU, in Boy Scouts and his church. After beginning his freshman year, he contacted his OL about becoming one himself, and realized that he wanted to take on the challenge.

“I came into college knowing that I wanted to make a difference,” Silva said.

There were 22 EVO staff members who worked over the summer. Orientation Leaders begin training for the position during the beginning of spring semester, which continues until the first orientation program in June.

“The training process is really cool,” Silva said. “We get a lot of hands-on professional development training. You learn how to interact with students. You learn basically everything about the university.”

For Silva, the biggest thing that OLs learn in training is how to communicate with people who have different communication styles. Working with incoming freshmen impacted Silva in several ways as well.

Clayton decided to apply to become an OL after applying last year and not getting the position. She felt inspired to apply after her Orientation Leader made an impact on her.

“I applied again because I had such an impact made on me when I attended orientation,” Clayton said. “I wanted to have that same impact on students that were coming to the university and get them excited about coming to FGCU as I was in their shoes freshman year.”

Clayton hadn’t been in a leadership position prior to becoming an OL.

“It definitely set the foundation for the different leadership opportunities for me in the future,” she said.

For Clayton, training was a lot, but she appreciated how much it prepared her for the summer.

“It was a lot, but they prepare you for anything and everything,” Clayton said. “They do a lot of different scenarios as far as advising goes, you get a lot of training on knowing the education problems inside and out.”

The hardest part of working as an OL for Clayton was assisting incoming students finding classes later in the summer.

“The hardest part was toward the end when classes started getting really low,” she said. “The students have to understand that while you probably might not like the classes you’re registered for, right now, you have add/drop week where you can add and drop those classes. It was a little rough because, you know, there were tears. I just had to calm the students and have them understand like ‘look, these classes are important. They’re probably not classes you want to take right now, but you’re gonna need them eventually so just stick it out and you can do it.”

Clayton’s time as an OL has impacted her positively, showing her that she now has a group of students looking up at her.

“They’re gonna be looking up at me so I can’t be slacking in that department,” she said. “But it’s made a positive impact, definitely something that I will take with me for my years to come.”