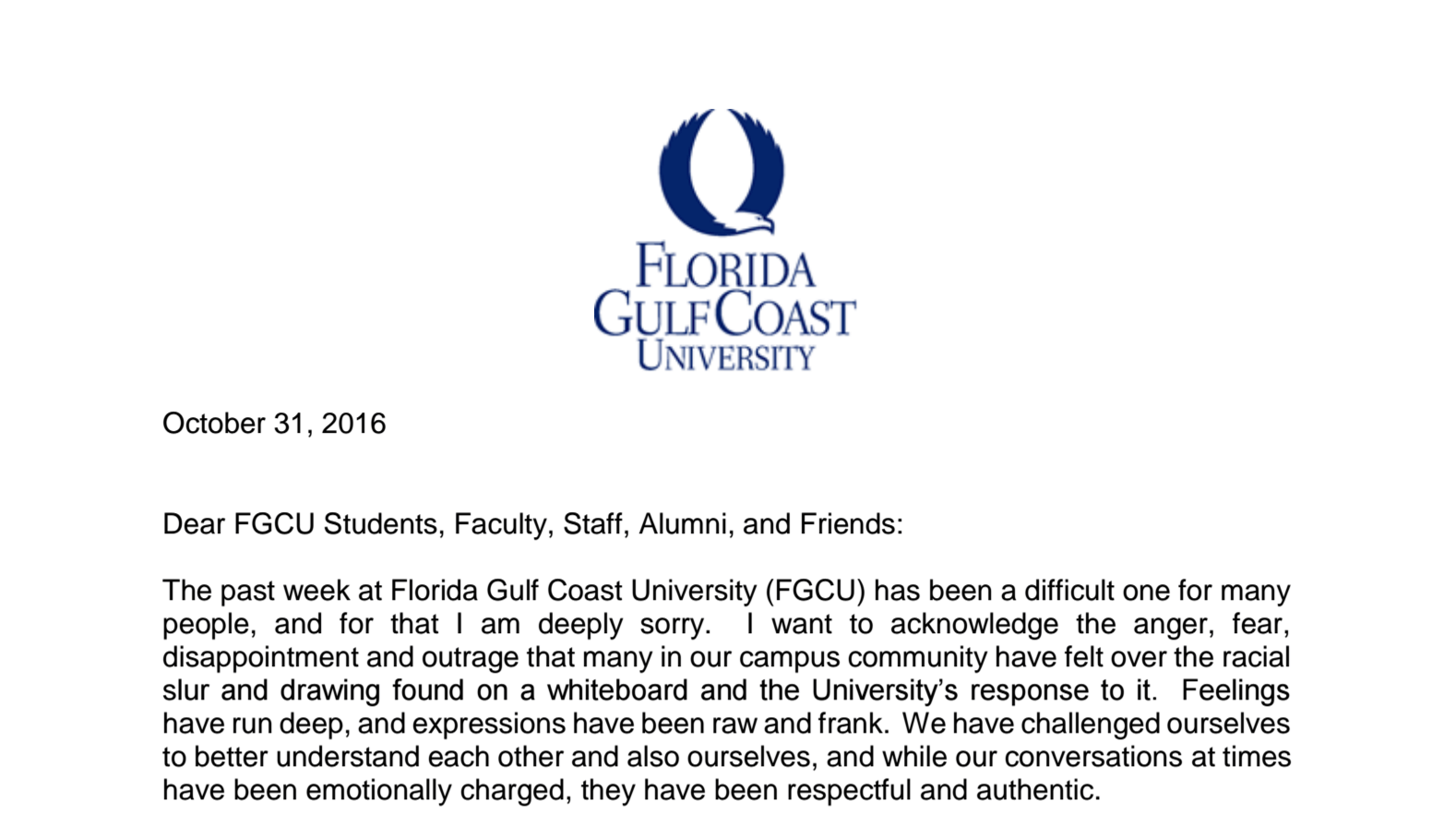 In an email sent to all students, faculty and staff on Monday, Oct. 31, FGCU President Wilson Bradshaw responded to the list of demands that were presented by student protestors at the Board of Trustees meeting during its Thursday, Oct. 27 meeting.

“The past week at Florida Gulf Coast University has been a difficult one for many people,” Bradshaw said in the email, “and for that I am deeply sorry.”

In the email, Bradshaw said that he met with several black leaders on campus on Friday, Oct. 28 in regards to the racial slur that was found in Seidler Hall two weeks ago.

Bradshaw and Brandon Washington, the director of institutional equity and compliance, sat down with Student Body President Thieldens Elneus, Black Student Alliance President Ashakeen Sterling, Coalition of Black Organizational Leaders President Keturah Pongo and A Step Above Perfection member Imani Hilton to discuss how they could work with the FGCU Diversity and Inclusion Committee, which was created by Bradshaw in August.

The majority of the message consisted of Bradshaw’s responses to the list of demands that students Jeremy Burke-Ingram and Malik J. Hines presented at the BOT meeting.

The first demand was for UPD to reopen the initial incident investigation. In his response, Bradshaw said that no additional information has developed, and no threats or similar incidents have occurred; however, UPD encourages anyone with information to come forward.

“In addition to UPD’s presence, I encourage members of the University community to report inappropriate conduct and threats to the Office of Institutional Equity and Compliance, and the Dean of Students Office,” Bradshaw said in the email. “Our staff follows up on all reported incidents to determine if individuals or groups can be identified as responsible, and directs student judicial proceedings where applicable.”

“The review process on the Student Code of Conduct currently is under way,” Bradshaw said. “Representatives of the Coalition of Black Organizational Leaders will be invited to participate in these discussions and review meetings.”

The third demand was for administration to explain UPD’s protocol for informing the campus community of an incident and why this particular incident wasn’t included in the report provided to Eagle News. In regards to the first part of the demand, Bradshaw said that UPD informs the campus community of incidents that pose a credible threat, and the slur and drawing found on the whiteboard wasn’t deemed as such at the time.

As for the second part of the demand, Bradshaw included the same quote that was given to Eagle News last week by Lt. Jim Slapp. Slapp said that the weekly report sent to Eagle News is generated through the university’s Crystal Reports software program and does not include several signal codes, such as “Signal 62 — Request Officer” and “Signal 14 — Information Call.”

“On Oct. 12 when the faculty member contact UPD about the whiteboard drawing and words, the call was logged by UPD dispatch as a ‘Signal 62 — Request Officer’ and this was not later included in the computer-generated Crystal Reports weekly press report,” Slapp said in an email.

The fourth demand was for administration to apologize and own the impact of the delayed response they had to the incident. Bradshaw said that, as president of the university, he makes decisions every day, and he made the best decision with the information he had at the time.

“The decision I made resulted in pain to those I care most deeply about — our students — and for this I am truly sorry,” Bradshaw said in the email.

The fifth demand was for administration to fund a university-wide security assessment. Bradshaw said that, in August 2016, FGCU contracted with a security consultant to review the number and current locations of security cameras on campus and that the initiative came about after a few reported thefts on campus.

“The consultant currently is reviewing the placement of our security cameras, and will recommend at the conclusion of the process if additional cameras are needed and the best locations for any new cameras on campus,” Bradshaw said in the email.

Bradshaw said that the Diversity and Inclusion Committee will be asked to consider various recommendations that have been made in response to the whiteboard incident. In addition to this, Bradshaw said that he is asking the Office of Academic Affairs to add a diversity/inclusion component to FGCU’s new New Faculty Orientation as well as to New Student Orientation.

The seventh demand was for administration to address the diversity of the BOT. In response, Bradshaw said that FGCU doesn’t appoint BOT members. Instead, six are appointed by Gov. Rick Scott, five are appointed by the Board of Governors, one is the SG President and the other is the Faculty Senate President on campus.

“I have and will continue to encourage minorities to apply for vacant positions on the FGCU Board of Trustees, and emphasize the importance of having a governing board that is representative of the diversity of the FGCU community,” Bradshaw said.

The final demand was for administration to create a fulltime staff member position as well as a graduate assistant position for race relations of minority students on campus. In response, Bradshaw said that the Assistant Dean of Multicultural and Leadership Development already serves this title.

Bradshaw then listed programs that the Office of Multicultural and Leadership Development has planned for the 2016-17 academic year, including plans for both Hispanic Heritage Month and Black History Month.

Bradshaw concluded the email by listing past diversity programs that have been held on campus.

“It has been a difficult time for many in our campus community, and I understand the reasons why,” Bradshaw said in the email. “We have outstanding initiatives for diversity and inclusion in place at Florida Gulf Coast University, as described in this letter, but if even one person at even one time feels less than valued and respected, we need to do more.”