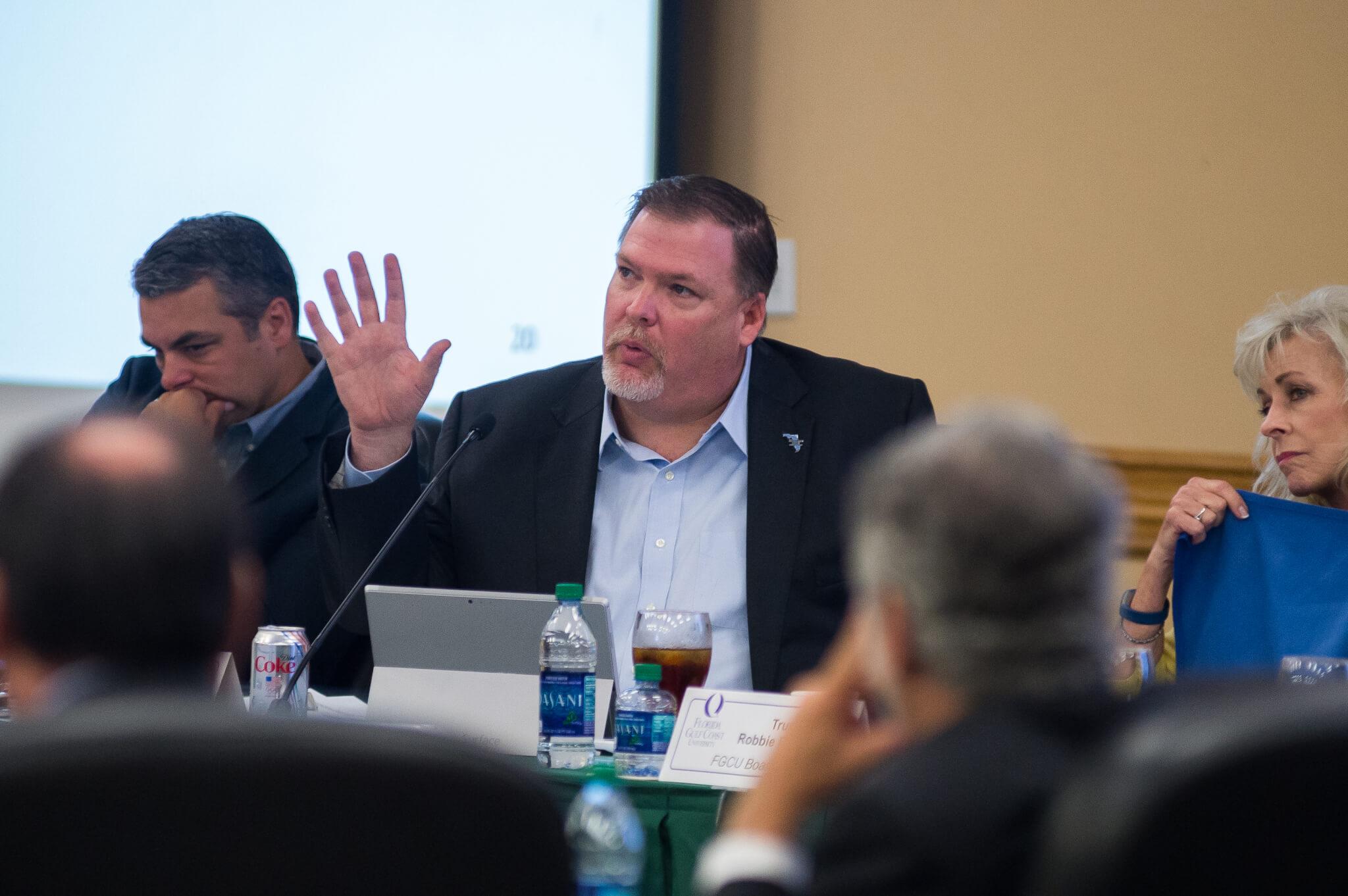 The Presidential Search Advisory Committee met on Oct. 19 in Edwards Hall 309 for an update as FGCU searches for a new president.

The meeting began with a greeting from Dr. Smith relaying the rules of form and public comment.

Witt/Kieffer search consultants took the floor right away via conference call updating the committee on how the search is progressing.

“This has been a really interesting couple of months,” Witt/Kieffer consultant, Lucy Leske, said via conference call. “We have been very encouraging and have seen the responses posted so far on the public website. We do expect to continue this kind of communication and activity over the next couple weeks.”

Dr. Smith took over to being answering questions and comments regarding the presentation.

Smith elaborated on the term “no contract” by reaffirming that it does not mean there will be no contract for the employment period, but rather no length of terms is necessarily set with review on a year-to-year basis, spanning five years. In regards to encouraging performance, there is a plan for a large monetary incentive at the end of five years in addition to the $350,000 or more salary, as well annual incentives and perks which was said to be similar to Bradshaw’s as the board of trustees sees fit.

Questions and concerns about the contract decision reached by the Board of Governors from board member Richard Ackert came through.

Sharon Isern expressed concerns about the contract as well, saying the lack of rolling contract was concerning, as she doesn’t believe the current option will attract top-quality candidates

“I do know not having tenure did reduce our pool,” Isaacs said.

Smith continued to defend the contract position, and said “You either have to be a half-empty or half-full individual at this point because that’s all there is.”

He told the board that he does believe it may limit the pool, but they are looking for a high energy candidate.

After much deliberation, a neutral voice shed light via the conference call.

“What does limit this pool is the public nature of the search,” Leske said in an attempt to continue to address and subside concerns.

The fact of the matter is, any contract extended to a potential president on the no-contract basis would work in a year-to-year time frame with long-term performance incentives. If there is an unsatisfactory performance, the candidate will be able to re-align their goals. However, if that does not subside the issue, the University has included the opportunity to part ways with the outgoing president by appointing him or her as a special assistant to the board of trustees for a year with their salary.

Tuesday, Nov. 8 is the best consideration deadline date, the date for which applications submitted prior will be considered. Following that, Nov. 10, is, as Smith said, “a very, very important meeting.”

All board members have been asked to be in attendance, their experience and backgrounds deeming it essential they are an active part of the process.

“It is absolutely critical that the reviews of your work be done prior to that day,” Evans said about the candidate selection process. “We can expect a lot of them to be coming in.”

FGCU will be live streaming all the interviews on the determined date on the web, with links to be provided by Evans.