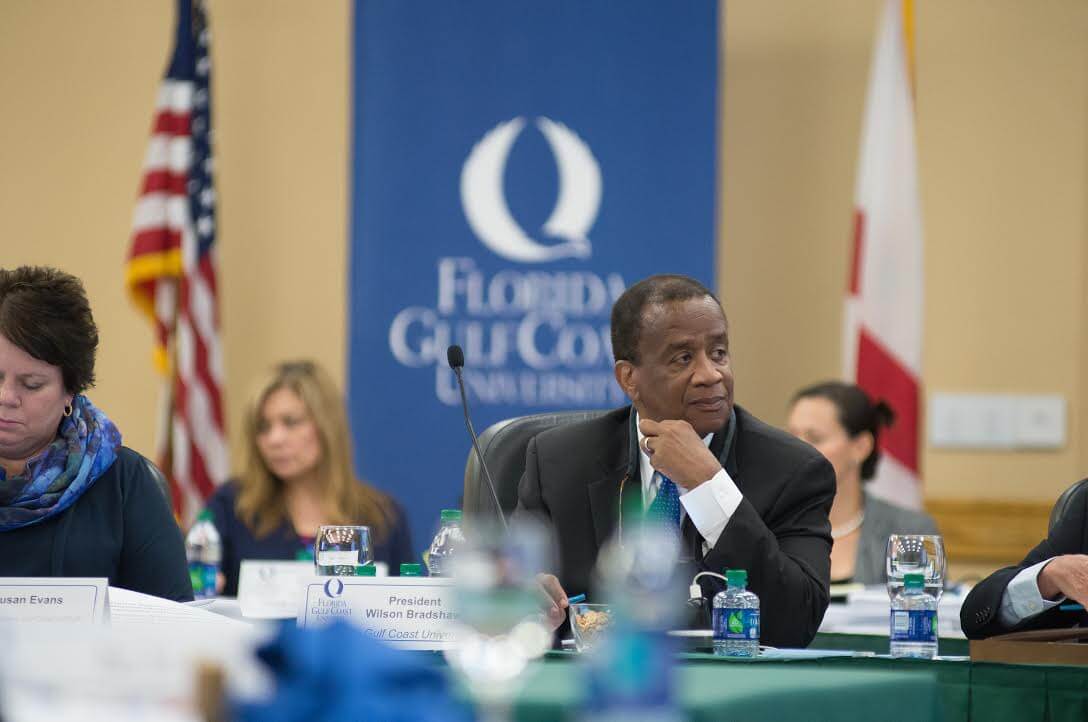 University President Wilson Bradshaw sits during the Sept. 13 Board of Trustees meeting. Bradshaw, who will be retiring come Spring 2017, is slated to serve time as a professor after stepping down as president. As of 8 p.m. Tuesday, Oct. 25, there are 44 applicants who are seeking to replace Bradshaw. (EN Photo / Brad Young)

The search for the new FGCU president continues as the first applicant pool has begun to flood in.

Forty-five applicants have been released online as of Oct. 25, two weeks ahead of the Nov. 8 deadline. Many applicants maintain professional standards; however, there are some that stood out.

First, we look at Roger Achkar. Hailing from Hayy al Dayaa, Lebanon, Achkar has many years of communications work on his resume. The highlights consist of his time working with the United Nations as a translator, working writings from English to French and then another from Arabic in the late 1990s and 2000s.

Achkar had also spent time working with the European Union as a communications consultant. The last dated occupation was from 2015 when he was listed as expert for the European Commission, where he expertly evaluated a business proposal of 100 million Euros.

Achkar received his bachelor’s in mathematics at the American University of Beirut located in Beirut, Lebanon. In 2010, he graduated from Universite De La Sorbonne Nouvelle with a doctorate’s in geopolitics. Both degrees open a wide range of expertise, backed up by Achkar’s extensive work with both the UN and the EU.

The next standout candidate was Robert M. Brzenchek. Brzenchek is from Douglasville, Pennsylvania and has a long resume of working within the U.S. Government.

Starting in 1999, Brzenchek spent several years working in law enforcement. After a short time, he began working as an intelligence specialist for the United States Navy Reserve. Over the years, he floated around in different educational positions.

Today, he serves as an on-air security analysis expert for NBC, notably speaking about security concerns when the Pope visited Philadelphia. He spends his time also serving as a project specialist with FEMA and currently holds a position as a criminal justice adjunct professor at Neumann University in Aston, Pennsylvania.

In addition to an impressive civic resume, Brzenchek anticipates receiving his doctorate in public service leadership and criminal justice from Capella University.

Another applicant that stood out was Ralph Nicholas Salvatore. A Lakeland native, Salvatore received a doctorate in organic chemistry from the University of South Florida.

Although the pool is growing greatly, it is important to note that the committee and hired search firm, Witt-Keifer, do not believe the applicants of best consideration will emerge until much closer to the deadline.

For a complete list of current applicants, visit wk-fgcu.com