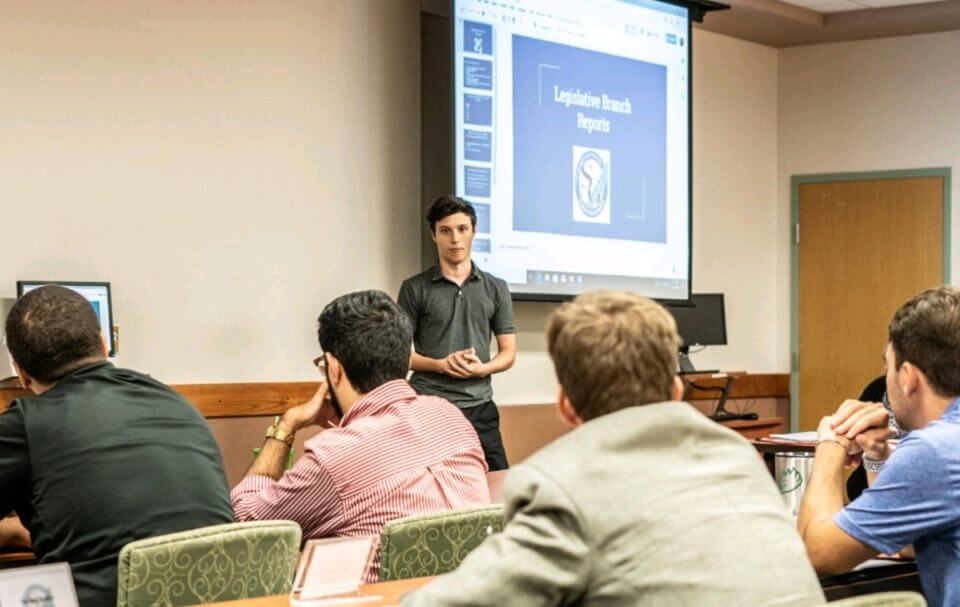 A complaint was filed to the Student Government Supreme Court regarding the legitimacy of a Senate bill that passed on Tuesday, Sept. 11, prompting the Judicial Branch to determine whether the bill will be overturned.

The complaint, filed on Friday, Sept. 14, cites the Florida State Constitution and questions the ethics of the voting procedure.

Student Government Chief Justice Shane Broadstone addressed the complaint in a Senate meeting, stating the Judicial Branch will convene in a public meeting to discuss and decide on the future of the bill.

The bill in question – Senate Bill 1819-008: Alumni Student Traditions Bench – passed unanimously in a Senate meeting after senators were offered memorialization of their name in exchange for a yes vote.

The bill –  created by the Alumni Association in conjunction with Student Government –  would allocate about $30,000 toward a bronze bench intended to preserve university tradition.

At question is whether the vote violates a Florida statute, which states public officers are prohibited from soliciting and accepting gifts, loans, rewards and favors that could influence a vote.

Student Body President Jalisa White addressed the vote in an email, stating the procedure was a “miscommunication.”

“Their names (the senators) will be on the statue regardless of if they voted yes or no,” White said. “Sorry for the miscommunication. That was my fault. Therefore, there was no incentivization. Senators are allowed and empowered to vote with their own ideas and mind.”

Broadstone’s announcement was met with inquisition regarding the meeting’s process. Senator Garette Parsons asked if senators who are unable to attend the meeting could write to the Judicial Branch to voice their concerns.

“If we are unable to attend that meeting, however we have someone – who’s actually visited the capital and knows the difference between gifts and non-gifts – can we write that to you,” Parsons said. “Email that to you?”

Broadstone responded by giving Parsons his email and deemed the question as “passive aggressive.” Broadstone also clarified the court discussed the issue in question stating, “the court knows the difference between a gift and non-gift.”

The Judicial Branch will host a business meeting – which is open to the public – on Friday, Sept. 21. The location and time of the meeting is yet to be determined.