(Filmed and edited by Travis Brown)

Tonight ended what was an historic FGCU Student Government election season in many regards.

While 2017 will likely be remembered for the most voters in SG election history so far, there was also a feat achieved by the FGCU Fusion party, which Fusion party members called “empowering” — the election of FGCU’s first female African American student body president, Jalisa White.

This follows a tumultuous school year in race relations on campus, following two instances of racial slurs found in Seidler Hall and the library.

Though the election of Fusion’s Jamar Powell would have been the most African American representation in SG administration history, Jason Finan of the opposing party FGCU Pride took the treasurer position by 61 votes.

Finan, who had once planned to run with FGCU Fusion for another position, said he is optimistic about both parties being represented in the final election results.

“It’s good we, at least, have someone representing (Pride), and it’s in a good position to be represented,” Finan said. “It works directly with all the organizations and purchase orders, purchase requests, finance codes. They’re going to be well represented in that respect.”

When Finan was announced as treasurer, Jacobse said she began to prepare herself for the worst.

“When they called Jason’s name, I kind of figured it’d go the other way just based on split parties being so uncommon, and that’s when it set in,” Jacobse said. “It was like, ‘Okay, react appropriately’ because I think moments like that test your character.”

White, though visibly stunned by the results, said she had envisioned this race for quite some time.

“So, around probably May, I was like, ‘Wouldn’t it be crazy if I ran for student body president?’ I was like, ‘That’d be crazy,’” White said. “But, then, I was like, ‘No, no, no no.’ But then, I think throughout my experiences and talking to students and hearing the needs of them, I think I was like, ‘You know I really think I could do a lot for the students’ and not only just me but it’s like, Antonia or, now, Jason, and our executive cabinet, our senators. Everybody is so passionate, and I really, really think we’ll be able to make such a big impact on the campus.”

Alongside Finan, 15 others from FGCU Pride were elected into the cabinet, including Paul Olivera, a senator from the College of Arts and Sciences. Olivera received an unprecedented 1033 votes from the student body — four more than his party’s president and vice president received.

“I wasn’t expecting it at all,” Olivera said. “I hoped I’d be elected, but it was a nice surprise. I think I’m pretty approachable. I just like saying hi to people. I had friends in both parties, and I’d always come hug them and greet them.”

Assistant Dean of Students Julie Gleason said this race was one of the closest in SG history. It came down to 1067 votes for Fusion’s White and Jacobse and 1029 for Pride’s presidential candidate Emmalyn Green and vice president Maddie Quinn — a difference of 38 votes.

The combined cabinet expressed the importance of following through with some of Pride’s party platforms when in office such as Green’s popular poncho and golf cart system proposal, which would aim to alleviate some of the parking concerns on campus.

White and the elected members of her party, in particular, mentioned their appreciation of Green’s onward system idea. Onward would be an online forum system for students to voice their concerns about campus issues.

“I think a lot of times — and I think this is just the culture we had and is something Jalisa and I are going to work on as a means to give the voice back to the students — students may not feel as confident reaching out to Student Government with issues,” Jacobse said. “There’s a level of intimidation I feel, which is only natural with leadership positions, but I think this system will create a perfect medium where students will be able to communicate and maintain their anonymity.”

This election was the first case in which a tie occurred between two senators — with Pride’s Ted Michel and Fusion’s Gustavo Romero both receiving 914 votes for a senatorial seat for the College of Engineering. There will be a senate meeting to break the tie on March 21. 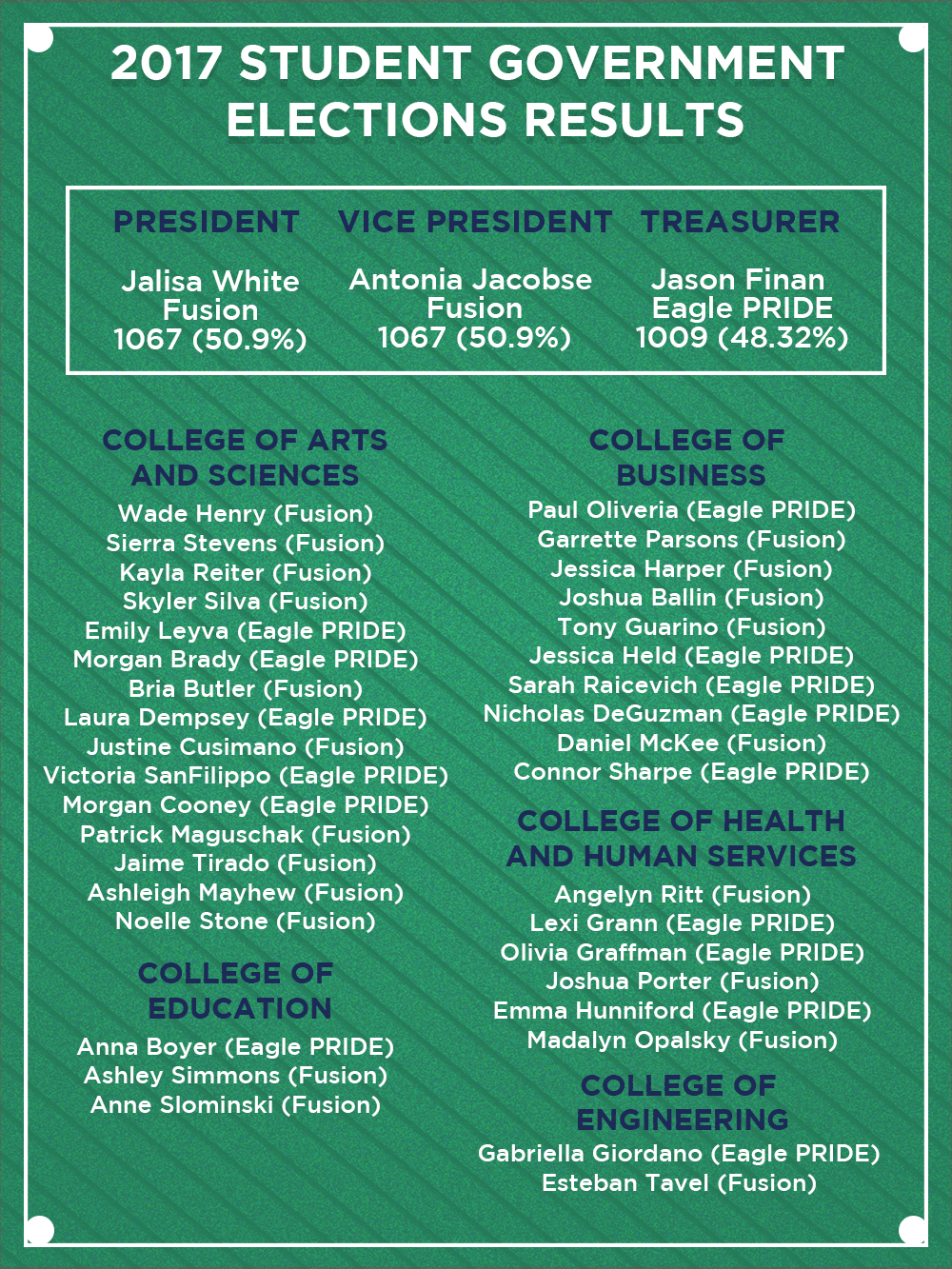