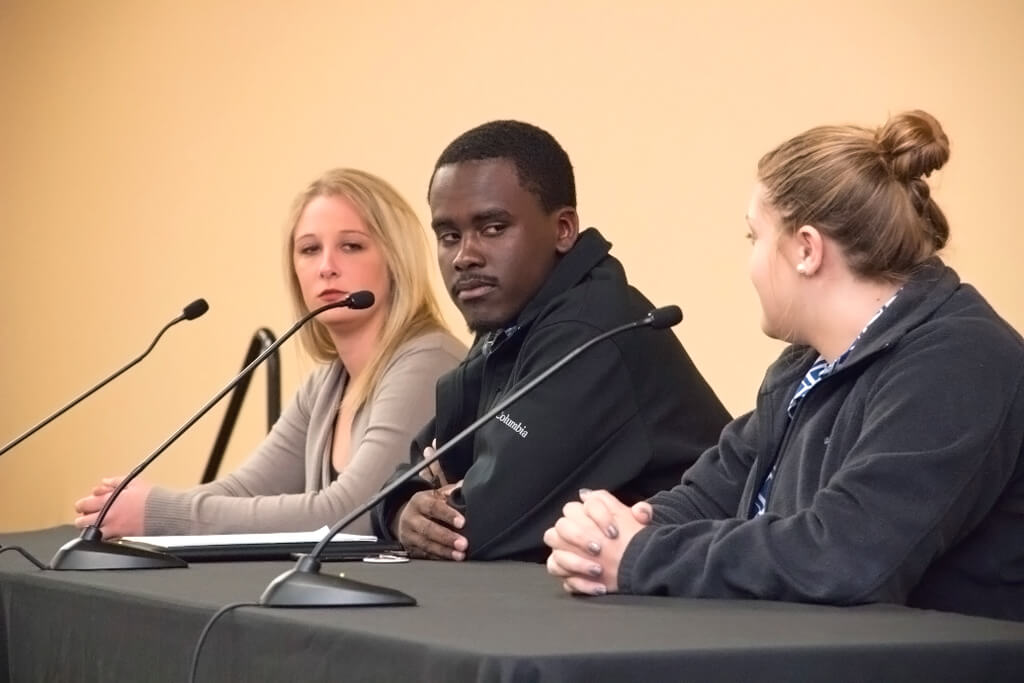 Debates are an important part of the election process. They allow candidates to share their ideas with the public, respond to questions, and most importantly, demonstrate how they rise above the competition.

So what happens when the candidates face no competitors?

This was the case at the Student Government debate that took place Feb. 19 at Florida Gulf Coast University. The result was an open, forum-style, Q&A session with three unopposed executive candidates: Thieldens Elneus, Jessica Scanlon and Karlie Gomes. The three are running for SG president, vice president and treasurer, respectively.

“The three candidates are running unopposed under the party ticket ‘Synergy’,” according to Shaneeka Supal, supervisor of elections.

The Q&A kicked off with questions from moderators from the elections committee, including Supal. One of the first questions asked involved what the three candidates considered to be the most important aspect of representing the student body.

“I think having relationships with people is probably the most important thing,” Elneus said.

Scanlon agreed, adding, “A recurring issue on campus is that students do not feel heard. We want to make sure students feel like they’re involved and their opinions matter.”

There was a notable lack of attendance at the Q&A — even many of the senators running under the Synergy ballot were not present. Supal asked the candidates if they had an explanation.

“There’s not as much enthusiasm about SG today as there was in the past,” Elneus said. “We want to bring it back. We want to bring a voice to underrepresented communities and groups on this campus, which will in turn generate more interest in SG.”

The conversation then turned to the candidates’ backgrounds and personal strengths that made them fit to be leaders of the student body.

“Recently, I was part of the budget hearings in the senate, and that was a really great learning experience,” Gomes said. “As treasurer, I’ll have to deal with budgets a lot, so working with the appropriations committee helped me become more fiscally responsible.”

In the latter half of the Q&A, attendees had the opportunity to submit their own questions to the candidates. One such question concerned the basketball game-day traffic situation at Alico Arena in North Lake Village.

“We can definitely have conversations with Chief Moore about this issue,” Elneus said. “However, my solution to many of the problems I will face as president is to listen to student input. That’s really the most valuable tool we have in SG.”

Students can cast their votes for Elneus, Scanlon and Gomes, as well as many other SG representatives, on the second floor of the Cohen Center until 6 p.m. Thursday. Election results will be announced that night at 7 p.m.