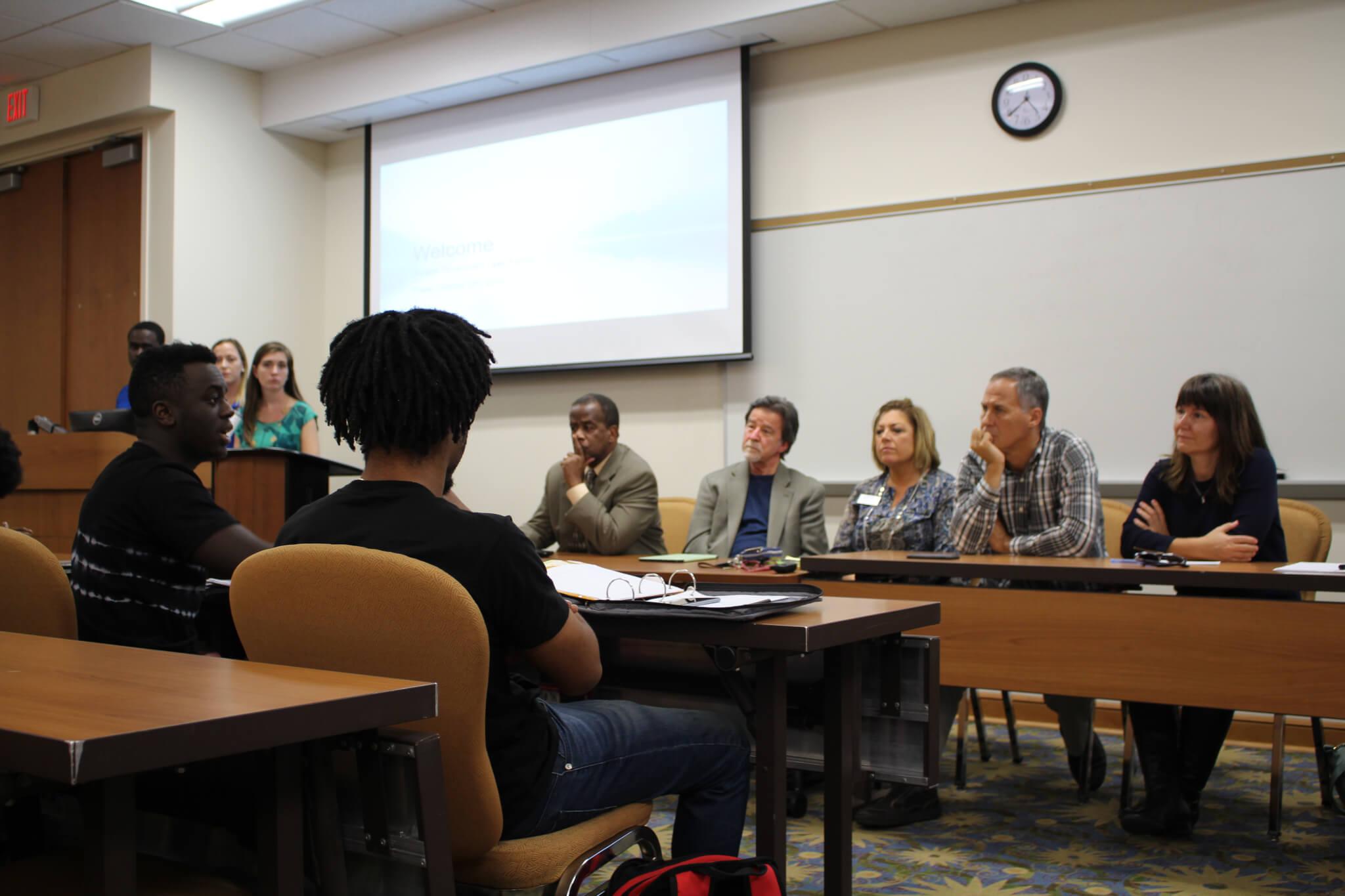 Student Government hosted an open forum on Oct. 28. in response to the student-held rally that occurred on Thursday, Oct. 27.

Bradshaw began by speaking about the demonstration that occurred on Oct. 27, expressing his pride in the peacefulness of the actions, noting how he saw students even leave an aisle open for the outgoing board members during the sit in of Marieb Hall.

Bradshaw also commented on his decision not to speak on the incident.

“If I had known the extent of the affect the emotionality that I saw in the face of the people, students that were in the audience, if I knew that was going to be the outcome, I would’ve made a different decision,” Bradshaw said.

The conference continued when one student stood and commented on the university’s student relation habit, saying, “I feel like there is a lack of communication between students and faculty. Where can we help so that there is better communication (with) you guys?”

Bradshaw answered, letting the student know that there are actions that he takes that some students may not be aware of.

“Some of you may or may not know, but I meet regularly with the president of the Student Government Association,” Bradshaw said. “Please know, we’re not scared of you all. We want to have meaningful and productive communication.”

The dialogue reaffirmed the idea that all members of the staff maintain an open door policy and encourage communication. Rollo reminded the crowd that anyone is welcome to come see him any time he is in his office.

Yovanovich then took the floor.

“Most of my job is solving problems,” she said.

She talked about the great deal of communication she has with students on a daily basis.

“We care,” Yovanovich said. “We want to hear you.”

Students then began to express concerns of lack of safety on campus, in which administration agreed with their concerns. Bradshaw proposed he would like to bring back that sense of safety.

“You all need to talk to each other because all of us need to be a part of making things safer,” Bradshaw said.

The student spoke in support of these kinds of incidents becoming public, saying, “I want to know that you are against these ideas or these feelings.”

Toward the end of the meeting, Joe Cudjoe, a longtime staff member, took the floor to speak about how the protest was the proudest moment in his over 20 years at FGCU.

“I, too, was so unhappy with the fact that we delayed with coming up with this,” Cudjoe said.

He commended the actions of Bradshaw and his response.

“Start talking about race and you suck the air out of the room,” Cudjoe said. “Let’s not be afraid.”

Cudjoe ended his speech with an African proverb.

“If there’s no enemy within, the enemy without can do us no harm,” Cudjoe said.

The crowd erupted in claps for the first time that evening after Cudjoe ended his speech.

The senior secretary with the president’s office, Samantha Williams, also stood to speak.

“We have grown as a university because the face I see here when I started working here I would not have seen,” Williams said.

Williams added onto her speech, saying she stands by Bradshaw and his decisions.

Bradshaw, once again, reassured that the campus as a whole will make strides toward a better future, promising that he will help to leave a long lasting mark of diversity by the end of his time here at FGCU.

The final question came from the far side of the room from a foreign student, who asked the speakers what she should do in a situation where racism becomes a concerning presence.

Yovanovich offered visiting her office to talk while Bradshaw reaffirmed that it is hard to deal with, however, that this kind of behavior is unacceptable, regardless of who it is. He ultimately reminded the student that the only solution is to accept that it’s going to be hard and make a difference.

In closing comments, UPD Lt. Slapp spoke about his time as an officer and said that he has not felt the hatred at FGCU that many of his colleagues elsewhere might.

Gleason reassured all the students that her office is always there to help any student or organization, deeming her office as a safe place.

“I think a peaceful protest can be very powerful,” Gleason said. “I just wanted to let you all know we are always there to help and support in any way we can.”

Yovanovich also invited anyone to join her on Tuesdays around noon to come eat lunch in the fishbowl located upstairs in the Cohen Center and to hold open discussion.

Bradshaw closed by pressuring students to attend Presidential Search Advisory Committee forums, urging them to find the qualities they want in the next president.

“The most important lesson you will learn on this campus will not be in a classroom,” Bradshaw said. “Have a hard discussion. You’re not going to find a more appropriate place to do this than a university campus.”