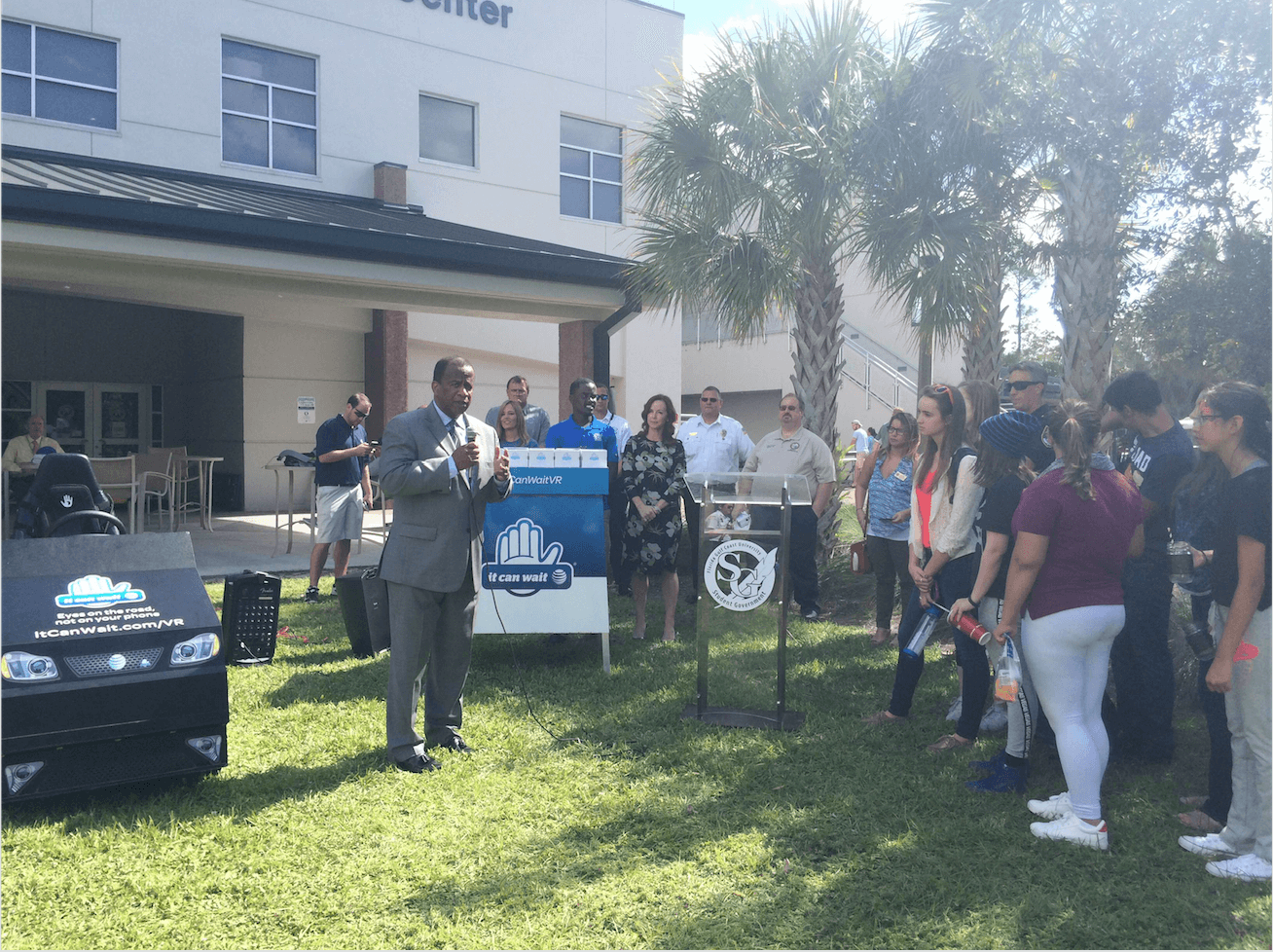 In an effort to spread awareness of texting and driving, FGCU Student Government partnered with AT&T to hold their “It Can Wait” event on the Cohen Center lawn on Wednesday, Oct. 19 from 11 a.m. to 2 p.m.

“We thought it would be a great opportunity to increase the awareness of distracted driving,” SG vice president Emma Green said. “Not just texting and driving, snapchatting and driving, a bunch of different issues that have caused a lot of accidents and have put students’ lives in danger.”

The event was a stop in AT&T’s national “It Can Wait” campaign. Representatives from the company have been traveling across the country in a van, demonstrating at numerous universities, utilizing a virtual reality program that lets participants experience what it is like to text and drive.

The virtual reality demonstration consisted of a mock car complete with a car seat and a steering wheel. Participants sat in the seat and wore a headset that lets you “see” the road as you were texting and driving.

FGCU President Wilson Bradshaw and Florida State Sen. Lizbeth Benacquisto spoke at the event, discussing the dangers of texting and driving and the important steps students must take against the issue.

“Texting and driving now has risen to such a level of concern, it’s important that we know what the effects are when you are distracted while driving an automobile,” Bradshaw said. “We want you to know how serious that can be.”

Bradshaw then went on to talk about how the majority of people have heard about someone who has been killed while texting and driving.

“We need to get our arms around that sooner rather than later,” he said.

In her speech, Benacquisto said that the most important way to stop texting and driving is communicating with one another.

“We can share with you the dangers of texting and driving, but there is no more powerful tool than you speaking to one another,” Benacquisto said. “You sharing with each other that you can wait on the answer to a question until you know your friend has gotten where they are safely, that’s the most important thing we can ask you to do.”

Elneus said that working with AT&T was simple.

“They let us know what they needed from us and we told them what we needed from them, it was a pretty smooth process,” Elneus said.

Benacquisto ended her speech against texting and driving by telling the crowd that there is nothing more important than the lives of individuals.

“There are many important things going on in the world,” she said. “But it can wait until you’re safely at your destination.”