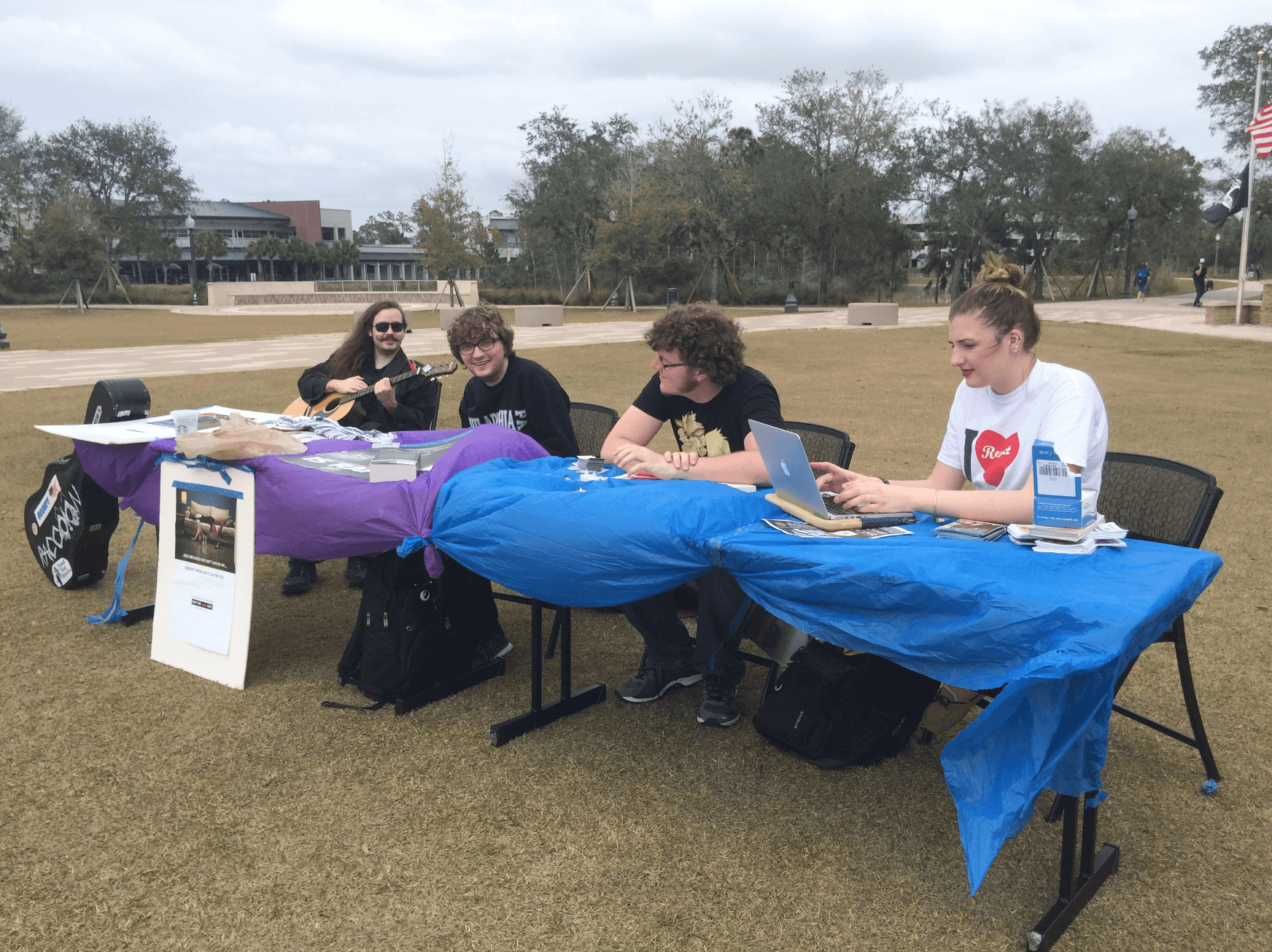 The fight against violence toward women isn’t close to being over, this is why an RSO at FGCU is continuing to take a stand. The Gender Equality Organization brought an online campaign to real life Monday, Feb. 15 in front of the Veterans Pavilion to spread awareness of gender inequality and the mistreatment against women.

#CampusRising is a campaign created by V-Day, which is a global activist movement to end violence against women and girls, according to www.vday.org.

“It’s technically supposed to be an online-only campaign,” said Victoria Blaire, the president of the GEO.

The club had a table covered in flyers, books and posters with statistics on rape and violence toward women, as well as an Instagram photo booth that students could utilize. Participants were encouraged to take photos and upload them using #CampusRising to show solidarity.

Planning of the event included paperwork and working with Campus Reservations as well as V-Day.

Not only did the event include club members spreading awareness on violence against women and other issues, but it also promoted GEO’s upcoming performance of “The Vagina Monologues,” a collection of monologues written by feminist playwright Eve Ensler.

“Since we’ve had a very short time to plan the play, we’ve decided to tailor (the event) to TVM and start selling tickets and promoting that as well,” Blaine said.

“Two years ago, the former president (of GEO) Dawn Larison had heard about the event before through (Abuse and Counseling Treatment), which she volunteered for,” Blaine said. “She organized it. It was really exciting. We had a great turnout and raised over a thousand dollars, and we donated it all to ACT.”

ACT is a non-profit agency that provides abused women in Fort Myers with counseling as well as a place to stay for victims who decide to leave their homes.

The play, a collection of monologues inspired by true stories from dozens of women that Ensler interviewed, deals with a variety of topics from a little girl talking about what her body means to her to a grandmother reflecting on her daughter giving birth for the first time. Tickets are $7 for FGCU students and staff with ID, and all proceeds will go to ACT.

“This year, we have 18 different monologues,” Blaine said. “Some of them are staples, and they’ll cycle through different ones.”
In recent years, the play added a monologue about trans women.

Blaine believes that her organization holds a special place on campus since it’s mission is unique among other organizations.
“We’re the only one that is really driven by activism,” Blaine said. “Driven by advocating on what is gender, what does gender equality look like and what’s going on that you don’t notice.”

While #CampusRising is the RSO’s first event this semester, the club will be preparing for the Clothesline Project, an event that involves club members hanging t-shirts around campus with statistics about sexual assault and rape written on them.

“It’s kind of a standing monument to all the survivors and an educational outlet for you to quietly engage with yourself,” Blaine said.

GEO is dedicated to educating the student body on issues regarding sexism on campus and how they can help.

“Sexism does have a presence here,” Blaine said. “It may not be here very clearly for you everyday, but if you talk to enough women, you’ll definitely hear stories.”