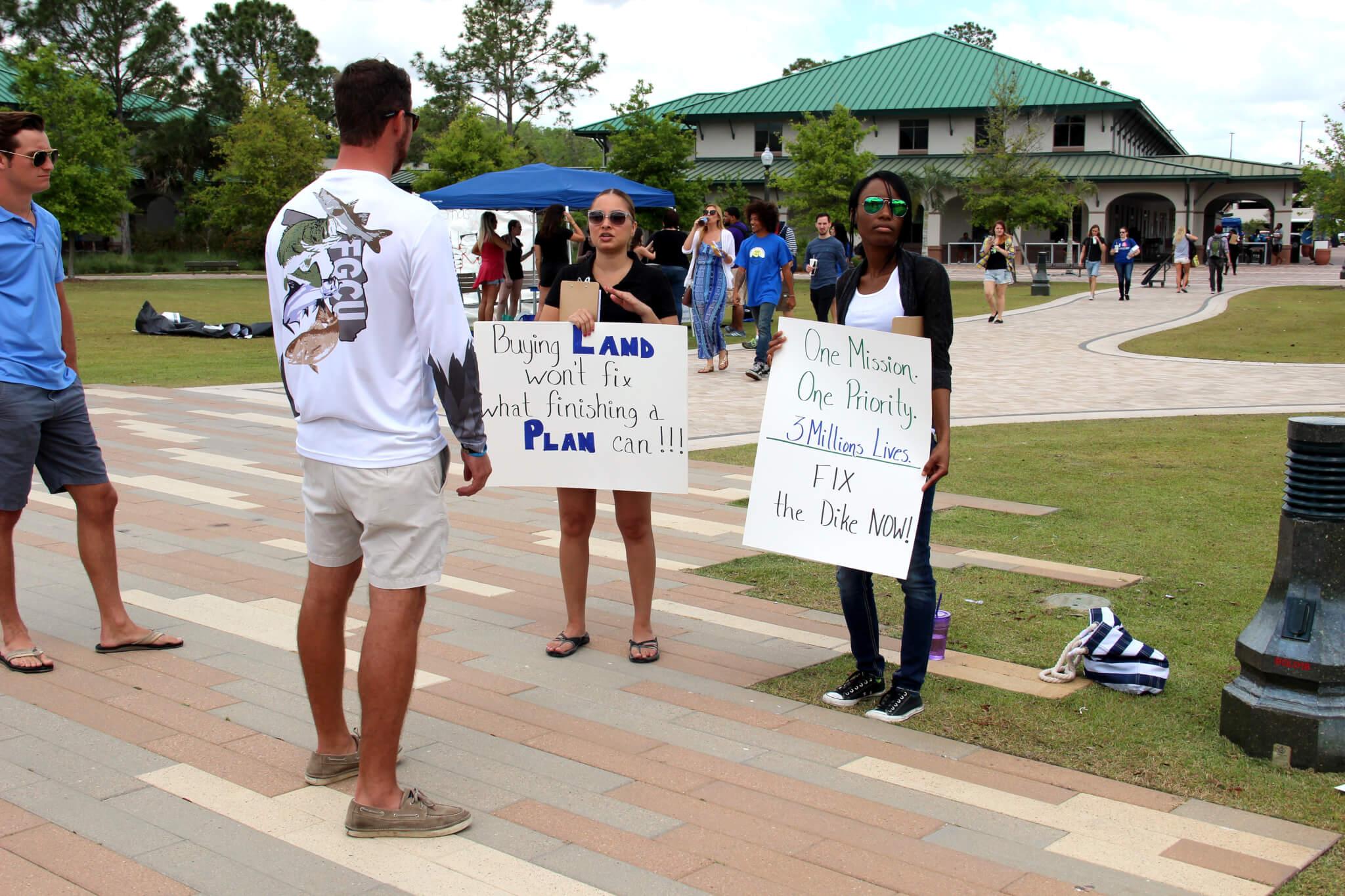 Wyler Gins, the president of the FGCU Fishing Club, talks to the protesters of the rally. Students enrolled in professor Amanda Parke’s Rhetoric of Social Movements course teamed up with the Southwest Clean Water Movement organization and held FGCU’s first Rally for Clean Water at the Veteran’s Pavilion. (EN Photo/Rachel Iacovone)

FGCU students who walked through the library lawn on Monday, April 18 were greeted by activists with bullhorns, concerned students and possibly paid-off protestors.
Students enrolled in professor Amanda Parke’s Rhetoric of Social Movements course teamed up with the Southwest Clean Water Movement organization and held FGCU’s first Rally for Clean Water at the Veteran’s Pavilion.
The event consisted of speakers from various local organizations discussing the effects of releases from Lake Okeechobee to the Caloosahatchee. The U.S. Army Corps of Engineers has been releasing water from the lake into both the Caloosahatchee and the St. Lucie Estuary since Friday, Feb. 5. The excess water has negatively affected local ecosystems. Several types of fish, crustaceans and plants have been diminishing. A possible solution to this problem is purchasing the land directly south of the lake, which is owned by U.S. Sugar.
“The planning was strictly up to the FGCU students,” said John Heim, the president of the Clean Water Movement. “I basically came and gave a speech to their course and asked them if they were able to, as a part of their class grade, create a clean water rally on campus.”
Senior communication major Brittany Jacobs led the rally along with Heim; Daniel Andrews, a co-founder of Captains for Clean Water; and Wyler Gins, the president of FGCU Fishing Club.
“We’ve had a great experience,” Heim said. “We’ve been up here three times now to speak to this campus to various different students, so we look forward for the relationship continuing on.”
Local attorney Leland Garvin spoke during the rally. An avid fisherman and paddleboarder, Garvin came out to the rally to share his grievances in regards to the current condition of the local waters.
“I came out because this is a very important issue that affects us all,” Garvin said. “I like to be in the water, and it’s gross.”
Garvin had previously met up with Andrews, discussing the issues involving the runoff and how to fix the problem.
“I’m not being paid for this, but if I have clean water and a working estuary, that’s payment enough,” Garvin said.
Andrews delivered a passionate speech during the event, sharing that the Southwest Florida that he fished and hunted in as a child has changed completely.
“The areas that used to be thick with turtle grass and oysters — now, it’s nothing,” Andrews said. “It’s bare sand bottom. The river of grass has been damned.”
Andrews went on to explain that Southwest Florida isn’t the only area being affected by the runoff. Those who live near the Florida Bay, the body of water located in between the southern tip of the state and the Keys, have begun to experience drought due to hypersaline conditions, which in turn are killing seagrass.
“The only way to help my friends down there is to purchase the land needed to store, treat and convey that water to Florida Bay,” Andrews said. “Everglades restoration is the only way to fix this.”
Andrews said the Comprehensive Everglades Restoration Plan, a project authorized by U.S. Congress in 2000 to restore the Everglades, is a good start to fixing the problems surrounding South Florida’s ecosystems, but it is simply not enough.
“CERP is going to provide us with a great plan, but it’s missing key elements,” Andrews said. “CERP relied on aquifer storage and recovery, and we know that’s not going to work. We can’t pump this water into the aquifers and recover it. We need above ground storage, and in order to do that, we need land acquisition.”
Arguably, the highlight of the rally occurred when Bull Sugar president Kenny Hinkle delivered a short but not so sweet speech regarding the protesters standing near the center of the library lawn walkway. The individuals were holding signs stating that FGCU students shouldn’t support the purchasing of the land south of the lake and that they should trust in CERP.
“It’s a damn good day to buy the land south of the lake, and if a politician tells you otherwise, tell him he’s full of bull sugar,” Hinkle said. “We can’t take this anymore. We’re tired of the fake protestors; they show up everywhere.”
Hinkle claims the “fake protestors” are sent by conservative special interest groups to fight against those who want to purchase the U.S. Sugar land.
Heim believes that the turnout was great, and that this will hopefully not be the last Rally for Clean Water at FGCU.
“We always lead with the idea that if one person walks away better educated than it’s a victory,” Heim said.