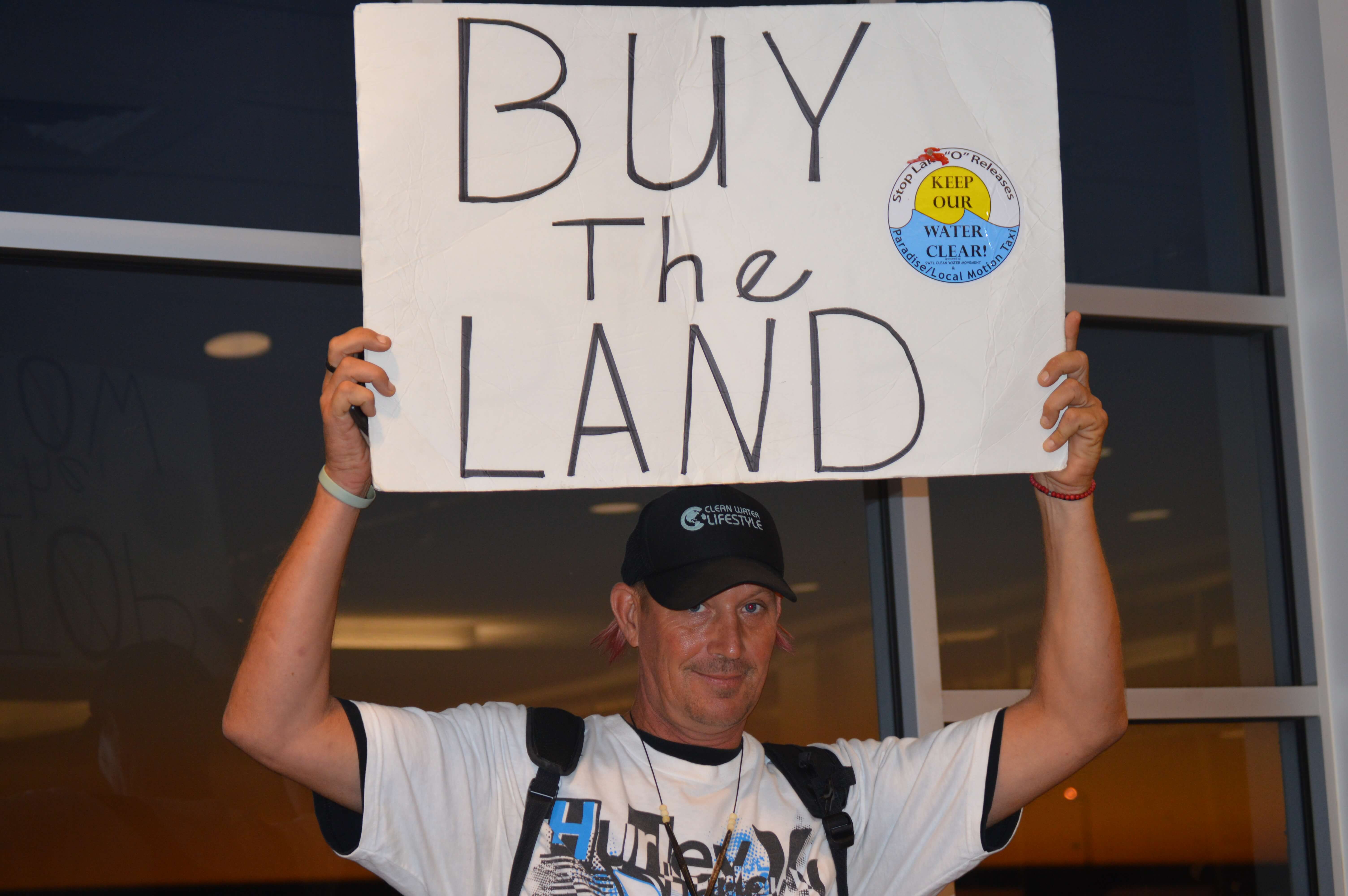 Haim posed with the sign that he held for the duration of the meeting. (EN Photo / Rachel Stroecker)

A group of FGCU students wants to educate the rest of the university about the water issues in Florida — specifically the issues related to the discharges of Lake Okeechobee into the Caloosahatchee and St. Lucie rivers.

Brittany Jacobs, a senior majoring in communication, is the leader of the movement. Jacobs is taking a rhetoric of social movement class this semester and decided to hold a clean water rally with some of her classmates as an assignment. The rally will be held from 11 a.m. to 2 p.m. April 18 at the Veterans Pavilion on campus.

“(The word) ‘rally’ does hold a negative connotation, but it’s totally intended as an educational rally,” Jacobs said.

The students are partnering with the Southwest Clean Water Movement, run by John Heim, and the FGCU Fishing Club.

Wyler Gins, a senior majoring in finance and minoring in marketing, moved to Florida ten years ago from New York and has been fishing since he was a kid. He is now a local fisherman in the Caloosahatchee River and serves as the president of the FGCU Fishing Club. Gins is helping Jacobs and her classmates with their assignment.

“I live to fish,” Gins said. “The fishery has declined so much since the last ten years that I’ve been here. It’s hard for me because I go out and fish a lot and get firsthand all of the impacts of what’s going on.”

Lake discharges have brought too much polluted fresh water into the Caloosahatchee River. This pollution then kills fish, crustaceans and other wildlife. Oysters, for instance, normally clean the water but have died from the low salinity. Also, the freshwater doesn’t allow seagrass to get its needs from saltwater, and the dirt in the water doesn’t allow the sun to go through. So, the grass dies.

Although the rally is focused on Lake Okeechobee discharges, Gins said he believes that is just one part of the major water problems. He said the local development is also ruining the watershed.

“Both the east and west coast of Florida are dying from too much freshwater while Florida Bay is dying from not enough,” Gins said.

Gins said everyone has known how to fix the problems since the 1940s, but they have failed to address it. Gins said the solution is to buy land to store, treat and convey water consistently throughout the year.

“The Florida elected officials are doing nothing about it,” Gins said. “They have done a lot of little Band-Aids here and there to kind of stop the people from getting mad and kind of divert the attention. You can do as many short-term solutions as you want, but we need a long-term solution.”

Multiple guest speakers from the community will speak about their perspectives and opinions at the rally. Jacobs said the main objective of the event is to raise awareness. However, they are also planning to get support for a petition. The petition, which was created by the nonprofit Captains for Clean Water organization, is asking the state government to use the funds from Amendment 1 to buy the sugar land.

Jacobs said the group has been tabling for a while now and has more than 200 signatures. The next tabling session will take place April 11.

“You can talk about activism all day, but until you act upon it, it means nothing,” Jacobs said.