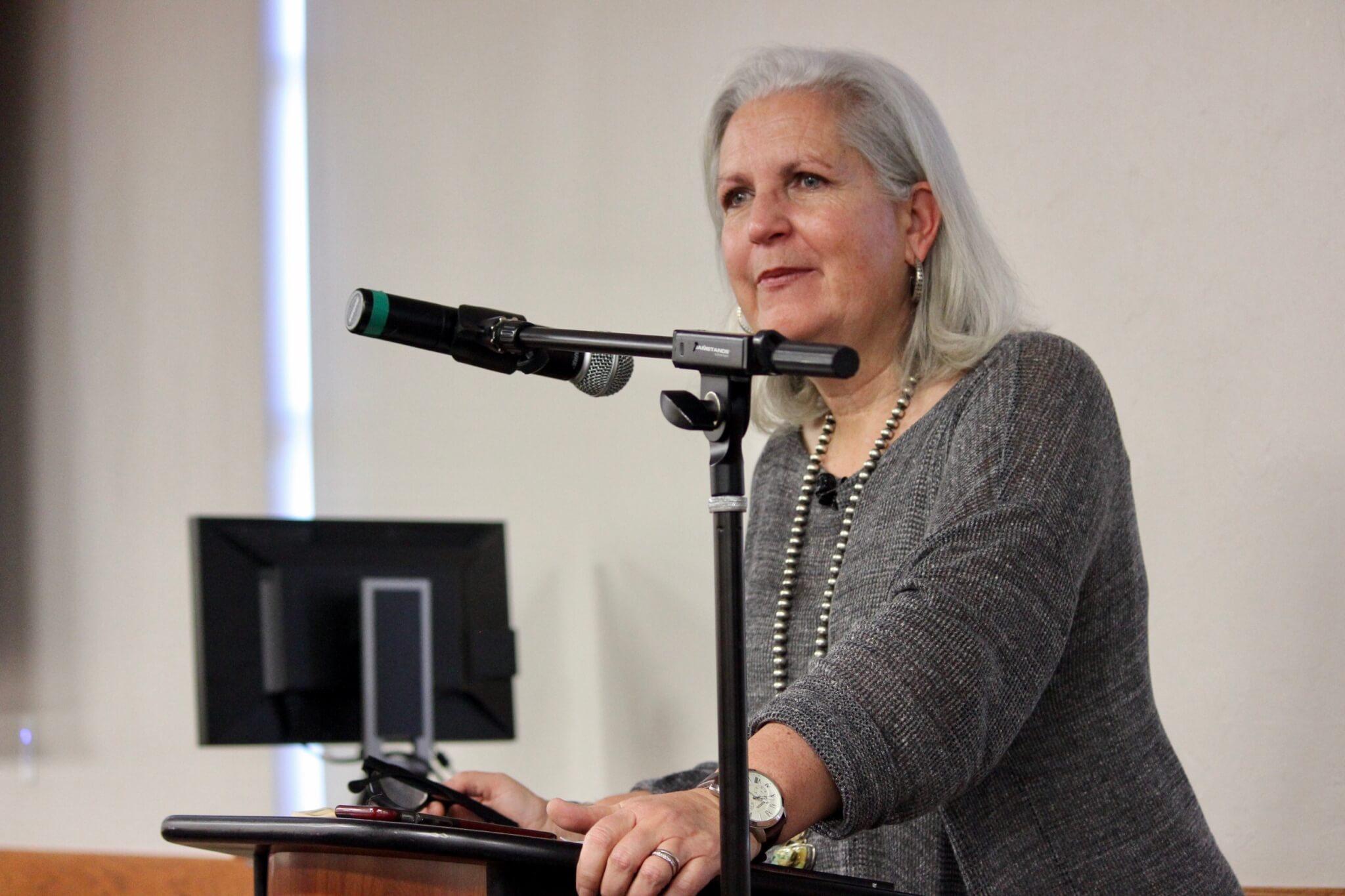 Terry Tempest Williams approached the podium in a packed room, then stepped back to recollect herself. She tried and failed to begin once more — tears pooling in her eyes but never falling.

“It is an absolute privilege to return to Florida Gulf Coast University,” Williams began after a minute of silence. “This is a healing process.”

The environmental author and activist was referring to the healing process of the wound caused by then-University President William Merwin disinviting her to speak on campus back in 2004. It took 12 years — and an annual student dialogue named in her honor — but Williams was eventually invited back by the university to give the Rachel Carson distinguished lecture on Feb. 2.

Williams spoke, in large part, on the great divide of the nation, in particular, following the recent presidential election, in which she was the only member of her family who did not vote for President Donald Trump. She said, despite that, her father, who is in his 80s, marched in Georgia for the Women’s March on Washington, and with that, she encouraged the audience to stop making assumptions based on someone’s political party.

She said the moment that confirmed that notion was years ago when late GOP Sen. Bob Bennett came up to her after a commencement address she gave at the University of Utah.

“He came up to me and said, ‘We have men and women who are in Iraq, who are dying. My question for you is what are you willing to die for?’” Williams said.

This question stuck with her, she said, though she was unable to answer it for six months.

Williams had been disinvited years ago because of a passage in her book “The Open Space of Democracy” that criticized President George W. Bush.

“When I read that passage in anticipation of coming here, I realized, if we took out President George W. Bush’s name and replaced it with ‘Donald Trump,’ it’s almost the exact same situation,” Williams said. “Or, is it?”

Despite Vice President Dick Cheney’s visit to Alico Arena soon after Williams was to speak, Merwin considered Williams to be too controversial, especially for a required first year experience speaker in the middle of election season. But, the students rose up, through organizations such as College Democrats and College Republicans, to bring Williams to campus themselves and hosted her in what is now the Cohen Center ballroom.

“It was standing room only,” communication professor Maria Roca recalled. “There were people sitting on the floors and in the aisles. You couldn’t get in. This was a big deal — a big, big deal. I would say, in my 20 years at FGCU, it’s probably the single most memorable day.”

Much like Williams’s last lecture, this one saw a room filled to bursting with students sitting on the floor against the walls while others stood in the doorways and more still watched the live stream in the overflow room.

Roca, who picked Williams and her husband up from the airport in what Williams described as the parting of the Red Sea, said Williams’s following speech was deeply moving.

The lecture was hosted by the Center for Environmental and Sustainability Education, which reserved the front row for select student leaders such as FGCU Amnesty International president Sissi Jensen, who opened up the questions following the speech.

The leaders were introduced by fellow student leader and recent recipient of a circumnavigators award Maryssa Pallis, who works for the center.

Williams looked to them in the front row with each call to action she made.

“We now have an administration that is taking all we hold dear, and I do not, for one second, assume that we all share the same politics; I know, for a fact, we do not, and that’s a good thing,” Williams said. “But, what I do think we share is a love of life, a love of freedom, a love of clean air and clean water, and this is what is at stake now.”