The Generation of Change: FGCU’s Response to the BLM Movement 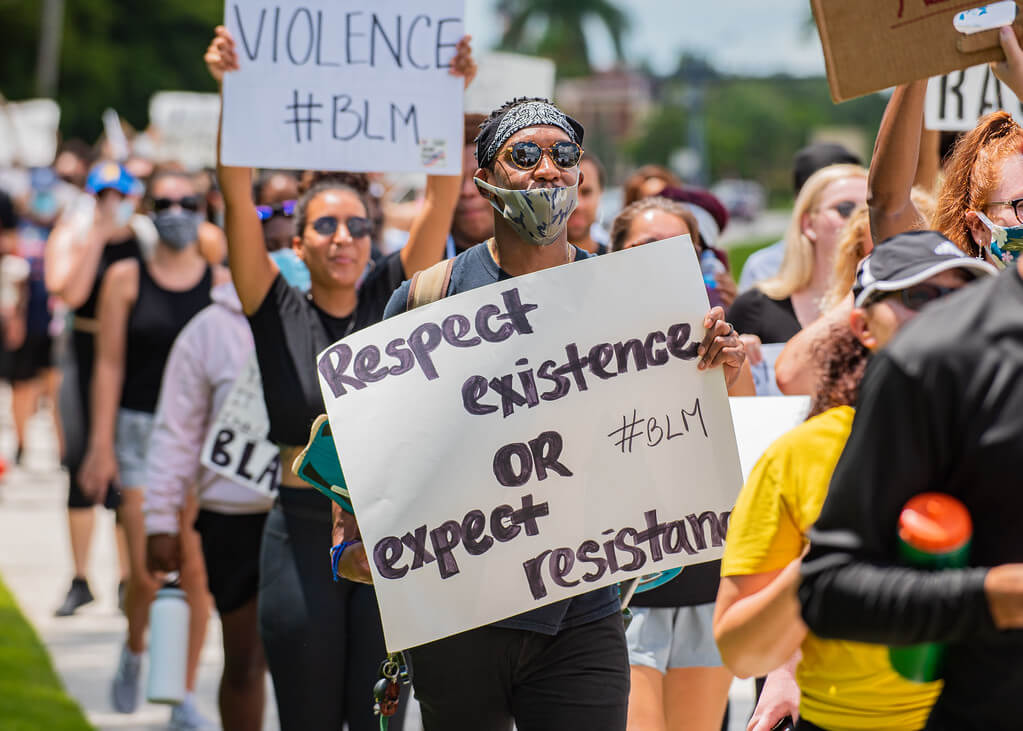 The recent death of George Floyd in Minneapolis has sparked racial injustice outrage across the nation.

Since late May, numerous peaceful demonstrations that stand in solidarity with the Black Lives Matter (BLM) movement have taken place throughout the United States.

As BLM remains a trending topic within media outlets, gatherings have escalated to a global scale.

A student-led protest was organized on Thursday, June 11, where participants began at Miromar Outlets and ended on FGCU’s campus.

President Martin briefly commented on diversity and inclusion at FGCU in his June 28 Coronavirus Update Video.

“Our continual commitment is to be a university that embraces diversity, embraces inclusion, and is here to make this a safe, engaged, collegial place for everyone,” said Martin. “Wherever you come from, whoever you are, whatever your ethnicity or race… [FGCU] is a place for you.”

With FGCU’s undergraduate student body being over 65% white, student organizations have begun planning how they will promote racial inclusivity among everyone this upcoming semester.

Student Government President Jacob Goldman said a committee was recently created to advocate for change, which he hopes will leave an impact on our community.

“We have had Student Government members attend a variety of events and conversations about minority representation that have been hosted by different student groups and campus departments,” said Goldman.

Although Student Government did not play a role in organizing the student-led protest, Goldman said they fully support the event and the awareness it brought to the BLM movement.

Another student organization that supported the march on campus is the Multicultural Leadership Development Center (MLD).

“As an African American male living in America, I have to learn how to cautiously navigate today’s society while others have the privilege to live in this world,” said Oakes. “We must increase the awareness of these inequalities through educating individuals about the BLM movement.”

Oakes also said the resources the MLD Center provides have always been there for students and are not a direct response to the BLM movement.

Some of those resources include increasing awareness, understanding, and appreciation of cultural differences.

According to Oakes, multiple professors have reached out to the MLD Center, asking for help to promote racial inclusivity within their classroom.

“[Staff] have to view the students holistically, and not just one of the several identities they hold in order to help them succeed through college,” said Oakes. “In the MLD Center, we are committed to empowering our student leaders while embracing diversity.”

Goldman also commented on diversity within the classroom.

While he believes many FGCU professors have a progressive mindset, Goldman said there is always room for improvement.

“I will be having conversations with faculty to determine ways that we can continue to grow and enhance our educational experience and increase our racial inclusivity within classrooms,” said Goldman.

Both the Student Government and the MLD Center agreed that keeping students engaged in discussions during the summer break will help gain traction for this upcoming fall.

The MLD Center hosted a Juneteenth Celebration in commemoration of freedom for African-American slaves across America. Viewers experienced music, spoken word, art, and cultural foods through a virtual platform.

The conversation of BLM is just beginning, according to Oakes.

“With the momentum built from the BLM movement, we will continue to educate others on their social responsibilities toward their communities and beyond,” said Oakes. “I believe we still have a long way to go, but it is important to acknowledge the small gains during this movement.”