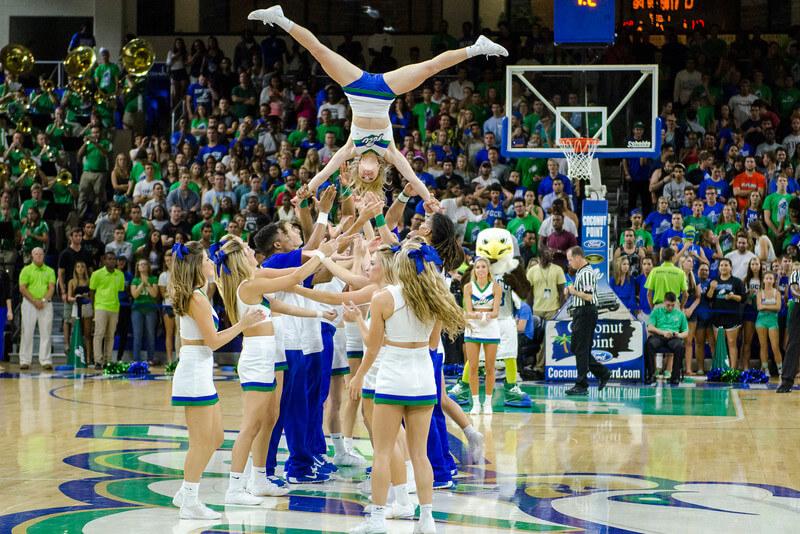 The FGCU cheerleading team has performed at sporting and community events, including men’s basketball games in Alico Arena, since its creation in 2002. Its next round of tryouts will begin April 24. (EN Photo / Tessa Mortensen)

During the past few years, Florida Gulf Coast University’s athletics programs have evolved from small hometown teams to games that other schools circle on their schedules. The cheerleading team is no exception.

The cheerleaders joined the court the same year the first dunk and the first three-pointer came from the inaugural basketball teams in 2002. Since then the cheer team has played a key role in the game-day atmosphere.

“School spirit at FGCU has exploded in recent years and that makes our job a bit easier,” said former coach and current assistant FGCU cheerleading coach Joyce Prive. “In the early days, we had to come up with all the traditions and try to get people on board. Now we have ‘buy in’ from the students and fans and there’s nothing like hearing a sold-out Alico Arena singing along to the ‘FGCU Hey Song,’  ‘FGCU Fight Song,’ or joining in the ‘Go Eagles’ chant.”

The game-day atmosphere from students, fans and Dirty Birds, with the FGCU cheerleaders on the forefront, has turned Alico Arena into a notably difficult venue for away teams to play in.

The NCAA ranked Alico Arena as the second-hardest arena for road teams in women’s Division I college basketball. The Eagles currently hold a 111-8 (68-1 in conference) at-home win record, propelling Alico Arena into the No. 2 spot behind UConn’s infamous Harry A. Gampel Pavilion.

So what exactly does it take to be an FGCU cheerleader?

According to FGCU cheer coach Emily Augustin, requirements to be a Division I cheerleader vary from college to college, but for FGCU, it’s all about being the most versatile cheerleader.

While the team doesn’t require any specific tumbling abilities, Augustin says the FGCU cheer team seeks the “all around” cheerleader with abilities ranging from stunts, to school spirit, to charisma.

“We look for someone who can stunt, tumble, perform in front of a crowd and hold a conversation with fans and potential donors,” Augustin said. “We look for the most well-rounded students who can bring more than one skill or another to the team.”

Although no specific tumbling is required at tryouts, the team has gotten to the point where all current members cheering at basketball games have the ability to do a standing back tuck. For non-cheerleaders, this is the standing backflip the team does together during free throw shots.

For male cheerleaders, there aren’t any specific abilities or prior experience required.

Since her freshman year, also the same year the FGCU men’s basketball team made the Sweet Sixteen, junior Darcy Williams has seen the requirements change to become an FGCU cheerleader.

“Now our coach encourages a standing tuck at try-outs,” Williams said, noting other typical cheerleader skills such as smiling, crowd leading and personality. “Since my freshman year, we have improved immensely. It seems like someone will come up to me before or after every basketball game and tell me how much fun we are to watch and how much better we are this year than in the past years.”

Prive says she has also seen a growth in skill level and talent since 2002, with an increased list of guidelines and regulations from the NCAA and AACCA.

“When I cheered only a small group of us had tumbling and now a standing tuck is a requirement to make it on the court,” Prive said. “The focus on safety has also grown. In 2002, there were very few rules and guidelines about what stunts could be performed.”

Outside of their typical game-day performances and FGCU Athletics events, the cheerleaders make several appearances across Southwest Florida, including local schools, nonprofit organizations and FGCU foundation and alumni events, acting as ambassadors for the University.

“Not only do we cheer at the men’s and women’s basketball games, but we also cheer at the volleyball games, and attend soccer and baseball games as a team,” Williams said. “We not only help the school, but also the community. I’ve attended countless outside events for the school like auctions and philanthropic events with my teammates as a representative of FGCU.”

Augustin says it’s important to have the team act as representatives of FGCU.

“I think that having the cheerleaders present and as actively involved as they are keeps the energy and excitement alive and promotes school spirit,” Augustin said. “They all do such an excellent job holding FGCU to the highest regard, loving their school and teaching others to do the same.”

On Feb. 21, the cheerleaders will get to show off some of their collegiate-level stunts, some of which are not allowed to be done on wood floor during game day, during the women’s and men’s games on their respective dates.

FGCU cheerleading will begin its next set of tryouts from April 24 to 27 at Alico Arena.