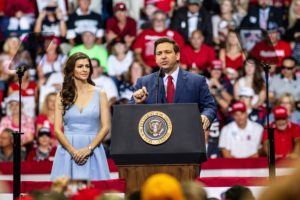 The packed arena, which seats about 7,000 at full capacity, was painted red with Trump’s iconic “Make America Great Again” hats and came to life with chants and song in unison.

“Birth right citizenship you know all about that,” Trump said. “We will keep the criminals, the drug dealers, we will keep them all out.”

“For years you watched as your leaders apologized for America,” Trump said. “You now have a president who is standing proudly for you all.”

DeSantis and Scott joined Trump on the stage to discuss other points that voters see as essential. 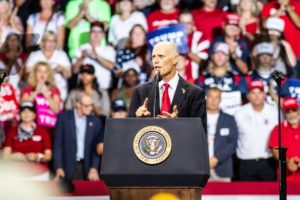 DeSantis was referring to an FBI investigation that was launched against Gillum, regarding a potential bribery. Gillum has not been formally charged

The crowd responded by collectively chanting “lock him up”.

Trump criticized the Democratic Party and claimed the party wanted to “erase our prosperity” and “reverse our progress.”