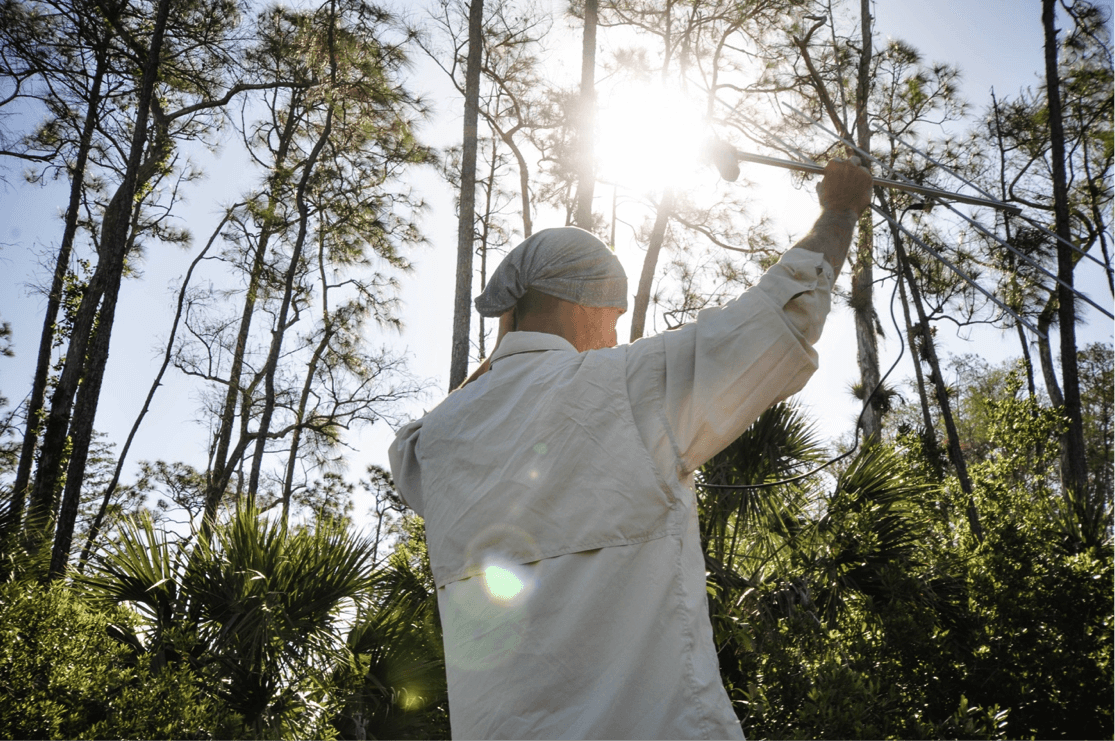 It’s 9 o’clock on a Saturday morning. Armed with a 3-foot long antenna, a snake hook, GPS, radio, rubber boots and a T-shirt tied around his head, professor John Herman, his wife, Wendy, and his two children, Sydney and Garrett, head out to locate the seven eastern diamondback rattlesnakes that live on the FGCU campus.

He has been tracking animals using radio telemetry for 16 years and is the first person to track the native, venomous eastern diamondback rattlesnakes in south Florida.

“Here in south Florida, we have some really cool large snakes, but there’s no clear understanding of how they survive,” Herman said. “And, they are large targets, which means there are big conservation concerns. That’s why I’m doing this. What do they do? What do they need?”

Herman’s love for snakes started at the age of 4.

“I’ve just always been fascinated by them,” Herman said. “I like the venomous group in general. They came up with a really cool evolutionary solution to deal with prey.”

Having grown up on his family’s 400-acre farm in Ohio, Herman didn’t have what might be considered a traditional childhood; he wasn’t exposed to TV and pop culture, as he and his brother spent their days farming and playing outside.

“My daily routine didn’t change much at all from when I was 5 to 18 years old,” Herman said. “My brother and I would wake up, go outside, come back in for dinner, go to bed and do it again the next day. School was an afterthought. I probably shouldn’t say that, as an educator, but our public school system wasn’t very academically strong, so I kind of skated through.”

After age 18 was a different story though. Herman attended Michigan State University where he got his bachelor’s degree in ecology with a concentration in zoo and aquarium science.

“I knew what I wanted to be,” Herman said. “I wanted to be a herpetology zookeeper, and I knew where — at the Toledo Zoo. It’s one of the top five herp-related zoos in the world, and it’s the zoo I spent my childhood in. That’s where I wanted to be. Positions never open there, but a month after I graduated, I was lucky enough that one of the long-time keepers left. And, I got the job.”

After three years at his dream job, Herman realized that he wanted to do more for reptiles and amphibians on a larger scale, so he went on to get his master’s, and then doctorate, in ecology from the University of Toledo.

Herman is now an assistant professor of wildlife biology, but when he first came to FGCU five years ago, he was an instructor, which meant his job responsibility was to teach — nothing more.

That didn’t stop him from immediately getting involved with hands-on research projects though.

Win Everham, a professor of marine and ecological sciences, who has worked at FGCU “forever,” he says, recalls a project they worked on together.

“There wasn’t a lot of money, and it was politically charged, but John just stepped in and helped with no support,” Everham said. “Sometimes when you collaborate with people you have to adjust to them. You don’t have to do that with John.”

That passion and willingness to be involved runs in Herman’s blood. He’s the same way with his teaching.

Damian Baker, an FGCU alumnus who graduated this past December with his master’s in biology, took a few classes with Herman and found him to be a unique teacher.

“He actually takes class outside,” Baker said. “We would learn by doing, not just reading about doing. And, he doesn’t just care about what he’s studying; he cares about his students. He takes the time to learn everyone’s name, and he’s there when you need him.”

Sometimes, he even brings the outside in. Right before his 9 a.m. biological science class on a Wednesday morning, he stood in front of his class with a black racer snake in hand, biting him.

“It’s a good day already,” he laughed, as he smelled his hands after returning the snake to the wild. “I smell like snake!”

He taught this 50-minute course in the largest lecture hall on the FGCU campus. An average of 115 students attended, and they actually participated and laughed with him. There was a certain energy within the classroom that you don’t always find.

“It’s different when you listen to someone who is clearly where they’re supposed to be in the universe,” Everham said. “It’s not just caring deeply about their discipline. It’s their ability to maintain that sense of wonder — and to bring it into the class. John does that.”

His first memory of Herman, the first person he met at FGCU, was going out to track snakes and watching Herman capture one.

“We got to a burrow, and I didn’t know the snake was in there; but, he just dove head first and pulled the snake out,” Metcalf said. “I was like, ‘How did you know that was in there?’ I thought it was the greatest thing.”

Herman does the work that he does outside of the classroom to instill ecological responsibility in students.

“Humans are animals,” Herman said. “We do live in the environment. We’re not outside or above it. Doing projects like the snake tracking helps you to have a sense of self-worth. Where do you fit in in this whole life thing? That’s what I like to demonstrate to students.”

Besides being an energetic teacher and colleague who truly enjoys his craft, Herman’s passion and dedication start with his family.

No surprise here — they like to spend time outside together.

“I like snake tracking with him because we get to be outside,” Sydney said, while Garrett jumped in excitedly to say, “And, we get to see snakes!”

He and Wendy also like to spend time outside, but enjoy cooking together too.

While they love the outdoors, Garrett admitted that his favorite thing to do with his dad is to play Yahtzee while Sydney enjoys drawing and listening to music with him.

“They really represent the reason I do just about everything,” Herman said. “I want to make sure that all of the wonders in the world that I loved so much are still available for them and that I instill in them an environmental ethic that makes them do the same. So, selfishly, we all get to enjoy it.”