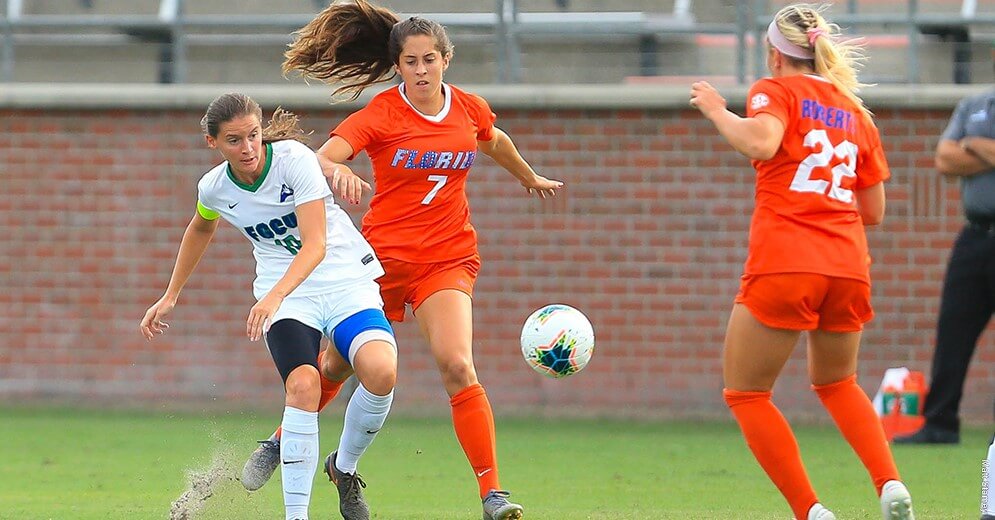 Photo Provided by FGCU Athletics // FGCU women's soccer continues to struggle on the road as they lose to the Florida Gators 4-0.

The FGCU women’s soccer team (2-3-0) was stalemated by Florida (3-4-0), as they lost on the road 4-0. While the Gators have an under .500 record, they’ve received national poll rankings this season and prove to still be a tough team to face.

Through the opening minutes of play, the Eagles seemed as if they would strike first with senior Opal Curless putting a shot on goal in the 6th minute. The Gators would find a chance of their own, as they put a shot in the back of the net in the 14th minute to go up 1-0.

The Gators wouldn’t let up there, as they scored again in the 25th minute to add to their lead. Ashlee Brentlinger blocked a shot just minutes later as Florida was within striking distance.

The Eagles had a scoring opportunity midway through the first half, as redshirt-junior Megan Young had a chance but the shot went wide. The Gators would respond with a shot of their and score their third goal of the night and take their 3-0 lead to the halftime break.

Starting the second half, the Eagles would get a look at freshman goalkeeper Emily McCue as she made her FGCU debut. The Eagles back line was able to help McCue as they held off the Gators until they broke through with two back-to-back shots in the 60th minute. McCue was able to save both shots, tallying the first two saves of her career.

The Gators would be awarded a corner and they would take advantage, as they scored their fourth goal in the 69th minute. The Eagles wouldn’t give up yet as they continued to pressure the Gators and sophomore Alyssa Abbondandolo would nearly score on a ball from redshirt-junior Tori Dorr but the Florida keeper would tack on her third save of the match.

With the game winding down the Eagles would sub in freshman players Lilly Lakich and Kailyn Sheehan, their first appearances on the pitch for FGCU. Though the Eagles had chances, Florida was able to maintain the shot advantage in their favor 17-5.