Bullhorn speeches may be affecting some students’ mental health 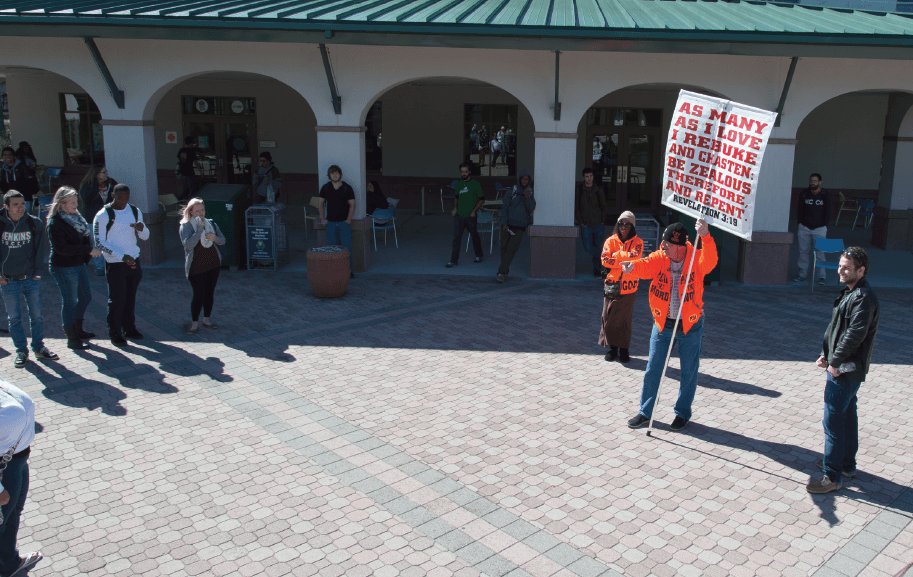 Students gather around the preacher on campus to hear him speak. EN Photo/Andrew Friedgen.

I am sure that the vast majority of students here at FGCU are aware of the preachers who occasionally visit our campus. If you are, you are probably familiar with their angry and hateful dialogue.

Now, we all have various ways of dealing with them. Many ignore them, offer profanity, or try to speak with them. You may think of them as simply ignorant, mean or even funny. But, what if I told you that they pose a legitimate threat to many people who may come across them? Would you believe me if I said their words have potentially life-threatening ramifications?

This is unfortunately the case.

You see, while to you their words are mean, to someone with a mental condition, such as depression or anxiety, their words can have long-term consequences and can do a lot of damage.

Their words are, by default, a negative stimulus. When you possess an anxiety disorder, such stimuli can cause a panic attack, which results in hyperventilation, high blood pressure and a debilitating fear response. There have even been documented cases of people who have died due to cardiac failure, brought on by a panic attack experience. Though this is a rare occurrence, it can happen. More commonly, an individual suffers a relapse in their treatment, setting back their development severely.

In the case of depression, an individual suffers a relapse, which can result in self-harm or even suicide. In 2012, there was a girl charged with manslaughter because she told another girl to kill herself when she was in a severely depressed state. You may think, “Well she told her to commit suicide, that’s purely why it happened.” This is understandable, but false.

To the brain, all sensory data is received the same way and processed in various specialized areas of the brain. In this case, the actual composition of the auditory stimulus is negligible. To a vulnerable person, hearing someone say, “you’re going to hell,” even if the statement isn’t leveled at them personally, could be enough to cause them to enter an extreme state.

Most stimuli are categorized in our brain as either negative or positive. Negative stimuli prompt a negative response, such as fear, disgust and sadness, in order to motivate us to remove ourselves from the stimulus, just as positive stimuli motivate us to be attracted toward said stimulus. The tone and inflection of a spoken word is enough for a response, and negative words only intensify the impact.

I consider the preachers’ comments to be fairly scatter-shot in impact, meaning that they will have an issue with you no matter what kind of person you are. But their homophobic and transphobic comments are the most dangerous.

According to the Centers for Disease Control and Prevention, LGBT youth have a significantly higher chance of being the target of violence, which consists of anything from bullying and teasing to rape and suicide-related behavior. This of course correlates to a higher rate of mental illness and institutionalization.

To be clear, this increased chance of possessing a mental illness is due to environmental factors such as hostility and ostracism, not any predisposed biological factors. Someone who is a member of that group doesn’t even need to hear a homophobic/transphobic comment to be affected, as the dialogue used by the preachers is synonymous with such prejudice.

To someone in a vulnerable state due to such abuse, the sound of the preachers isn’t just mean. It can cause a flashback to when their family disowned them or when their friends attacked them. Again, this is not universal, but it is more common than you might think.

I’m sure that what I have said at this point disturbs you in some way, and you may be wondering, “Why am I being told this?” The reason is to show you how important it is that we drown out such negative stimuli. I encourage anyone who is available to do so to play music when the preachers are here to drown them out. I don’t want you to jeopardize your classes or academic performance for it. But if you have the time, when the preachers show up on campus, bring stereos, boomboxes or even your own instruments with amplifiers. Ensure that everyone hears you and not them. I highly suggest positive, happy music to counter their negativity. I understand the appeal of blasting death metal or something like that at them, but I implore you to play positive music, whether it be something like the Beatles, the Grateful Dead, Bob Marley or more modern artists such as Bruno Mars and Pentatonix.

The choice is yours. Whatever it is, let it be joyous and put everyone in a good mood. Not only will you get to fill the air with your favorite feel-good tunes, but you’ll be greatly helping your brothers and sisters who are vulnerable to the preachers’ harsh words. You might even save a life.

“If music be the food of love, play on.” — William Shakespeare