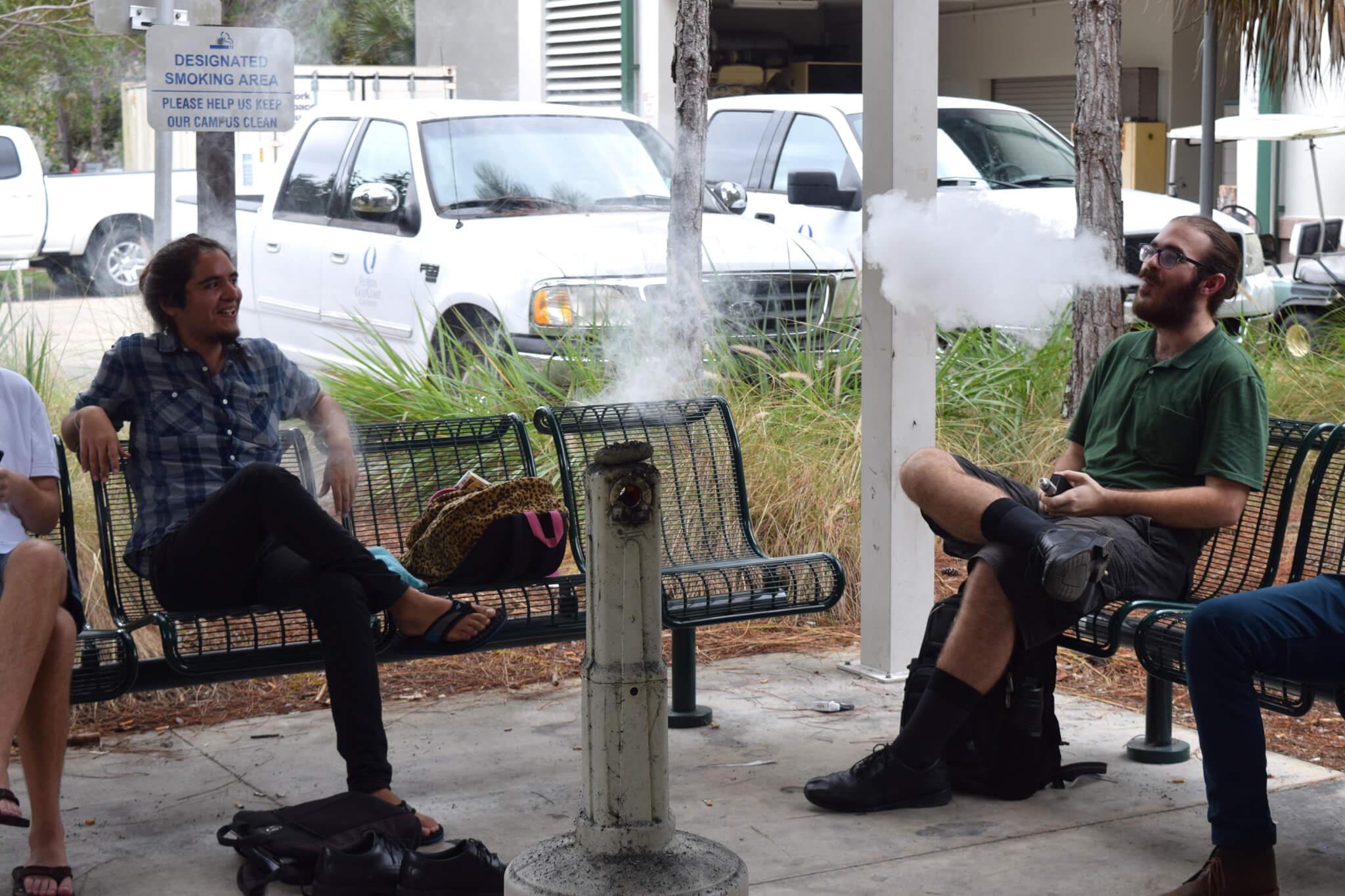 The recent elimination of the smokers section on FGCU’s campus has caused some controversey but overall is a healthier step for non-smokers. (EN Photo / Rachel Iacovone)

I grew up around my mom smoking cigarettes. Everywhere: in the car, in the house, when we were walking around, in restaurants (when that was still allowed), at her friends’ houses — where her friends were usually also smoking. I mean, everywhere.

I didn’t know it was gross when I was young, but when I got older, I realized it really was. It’s still gross now.

Let’s be clear about something though: this doesn’t mean that the person smoking is gross. It just means that the act of smoking is. So, smokers, I promise, I am not calling you gross.

For a while, I smoked Newports, which have fiberglass in them if I remember correctly, so that’s great. Then, I switched to Camel Crush because what’s cooler than being able to choose if you want regular tobacco flavor or menthol? And, who doesn’t want to crush a thing in the filter of their cigarette that makes a satisfying “snap” noise, right?

I knew the smoke and nicotine were doing me no favors, but it didn’t stop me.

I worked at Best Buy at the time, and we smokers always got more short breaks than everybody else (sweet perk!). Plus, you kind of felt like you were in some special club.

I get how nice it feels to belong to a group like that. I’m feeling a little nostalgic right now imagining my friends who I’d hang out front of the store with — in the sun, rain, snow and wind. Nothing stopped us.

So, what I’m trying to say is: I feel like I truly understand the smoking section. I get why there was almost always a large group of people there having a good time because I remember when I was part of that group. I remember even back to high school where the smokers had to hang out across the street. Smokers always get their own space.

The thing about the smoker’s space at FGCU is that it exposed way too many people to the smoke. The location just didn’t work.

I walk from Whitaker to the library three days a week, and from when I’m probably six feet away from the smoking section until a few feet after, I get hit with the smell of cigarette smoke. It’s a strong smell and not a good one.

When I was diagnosed with Crohn’s disease in 2011, I had still been casually smoking, and one of the first things the doctor said was, “You have ulcers. You really shouldn’t smoke at all — ever again.”

And, thankfully, I had always been able to stop whenever I wanted to, so I quit that day, the same day I started a long journey to get healthier and trying to heal myself. Cigarettes don’t fit into that equation.

While I now try to make choices that my body will thank me for and make me feel better, I remember when I didn’t make those choices. So, I don’t judge the smokers for a second. I have just chosen to not put that stuff in my body, so I don’t want there to be such a central place where it can easily enter my body uninvited.

Most people don’t. That’s why the smoking section is no more. I can’t speak for the whole population of those who are in favor of this, but I can speak for myself, and I know that I don’t want to limit smokers’ rights or think smokers are bad people. I just don’t want to be exposed to the smoke, and I have a right to not be, just like smokers have a right to be.

Dealing with things like this is part of what’s wonderful about being human and coexisting with other humans: learning how to have differing opinions and to deal with them respectfully. Because, there will never be a moment in time when all humans will agree. The sooner we accept this wholly, the less we’ll argue about dumb stuff.

Smoke all you want, just not in a location that I can’t conveniently choose to walk around. That’s all.