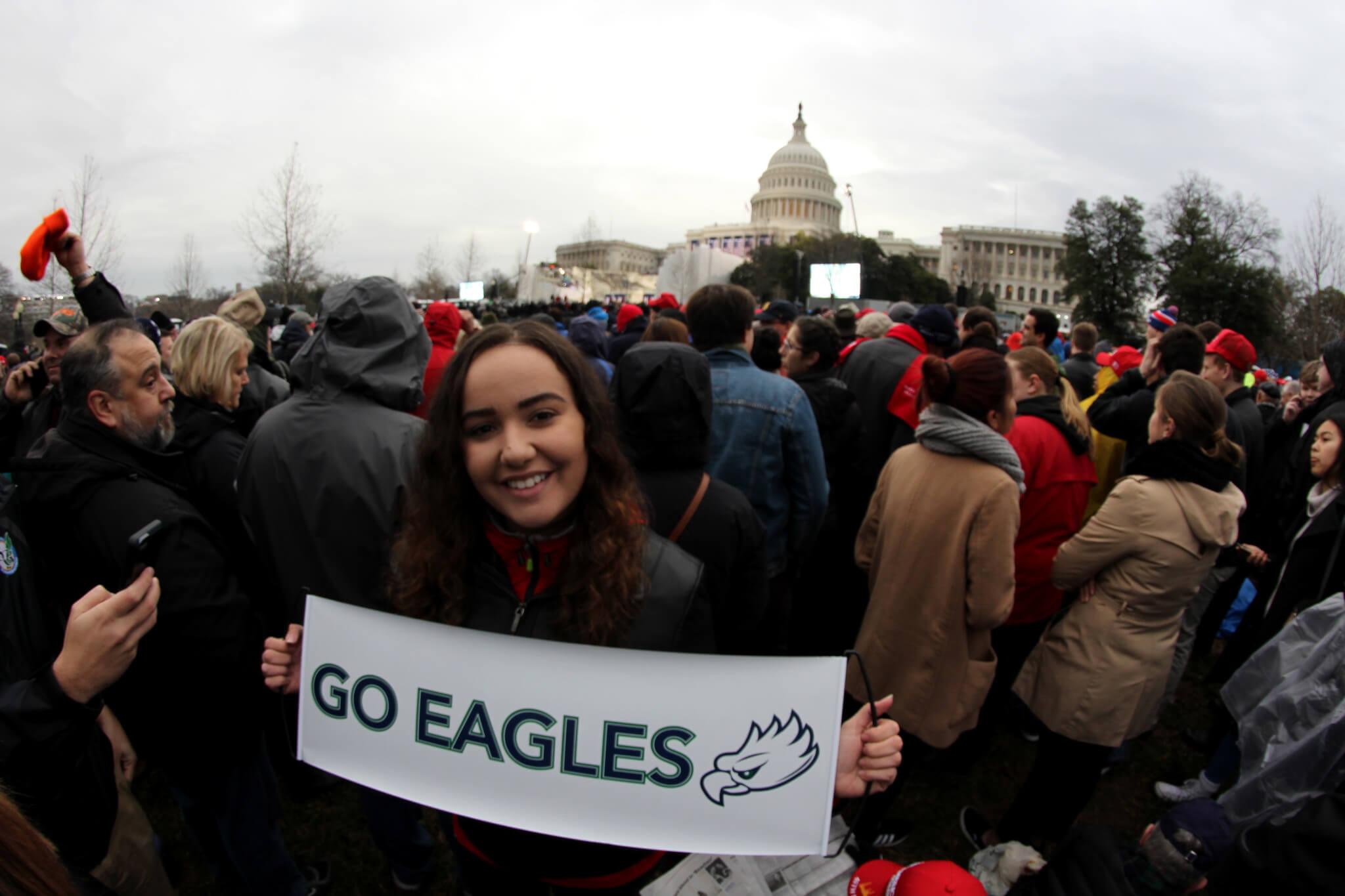 I knew I should be on the Metro as soon as it opened — early, given the occasion — but pressed snooze twice as always, as though it was any other day, as though I wasn’t in a hotel more than an hour outside of the city because of the mass of visitors spilling out into the tristate area and as though I wasn’t about to “witness history,” a phrase which was repeatedly offered up to me throughout the day as a description of what was happening to me on Jan. 20, 2017.

When I finally woke up at 3:34 a.m., I took a scalding shower in an attempt to burn off my two hours of sleep and then grabbed a seat on the empty train car when I finally got to the station — my hair still wet and stiff with cold.

On the ride to Capitol Hill, I thought a lot about covering the 2016 presidential race. I thought about Hillary Clinton’s campaign — not once, not twice, but thrice — allowing me in as press with only a day or two (or once, an hour) of warning. Of course, that fact may add to the narrative that media clearly supported her, but in my defense, I wrote an entire article about how I didn’t support her in the primaries.

Meanwhile, I was denied credentials when Donald Trump came to Germain Arena a few feet from our campus, even after he claimed that very week that it was the press who was the one refusing to cover him.
I, of course, got into his rally regardless because I’d made it my mission from the start to cover any and everything about the election equally — an attitude which eventually got me onto the D.C. Metro train I began yesterday’s journey on.

My prior experience with a Trump-centered event left me uncomfortable I admit — one rally goer going as far as to shout “kill media!” at one point. Personally, I was also uncomfortable with the woman who stopped me to remark with evident disgust that my curls looked “ethnic almost.”
“Ethnic actually,” I almost corrected, but I was there as press, even without credentials. I reminded myself of that again when a man in the concession line called the girl behind the counter, who refused to serve him beer at 2 p.m. by arena policy, the n-word, with a hard “r” — the first time I’d witnessed such an incident in my life.

But, a couple bad eggs did not outweigh the thousands of others in the arena or the man they supported. Trump hadn’t told them to say or do those things. They likely would have with or without the guy.
So, I entered his inauguration four months later as the general public once more, not bothering with requesting press access this time. And, then, I stood in 40-degree weather for seven hours on Capitol Hill — numb for many reasons but mainly in fear. 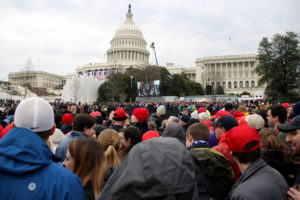 Trump didn’t scare me. In fact, Trump is the one who looked scared when he took the stage, exactly on time.

What scared me was the crowd’s response to Sen. Chuck Schumer’s speech.

There were groans and jeers the second the Democrat took the stage, which came as no surprise following the aggressive booing of Clinton when she joined her husband, Bill, amongst other former presidents and first ladies on stage, but it only continued when Schumer opened speaking on the “rapidly changing economy that benefits too few.”

“Whatever our race, religion, sexual orientation, gender identity, whether we are immigrant or native born, whether we live with disabilities or do not, in wealth or poverty, we are all exceptional in our commonly-held yet fierce devotion to our country,” Schumer said, though no one would be able to hear it over my section’s booing or singing “Na Na Hey Hey Kiss Him Goodbye” alone, which got the strongest when Schumer mentioned sexual orientation.

The same went for the portion of Trump’s speech that mentioned “radical Islam,” though, in this case, it drew enthusiastic cheering about its impending abolition.

“We will reinforce old alliances and form new ones and unite the civilized world against radical Islamic terrorism, which we will eradicate completely from the face of the Earth,” Trump said.
Trump has spoken a lot about unifying the nation’s obvious divide since becoming the president-elect, and his first speech as president talked a lot about that. But, to me, I was disheartened that some of his initial good sentiments toward the beginning of his address would be forgotten because of his bold statements of unifying the country in hatred and fear. Some would remember this as the no-nonsense go-getter Washington outsider they voted for while others would use this to confirm their beliefs that Trump won’t be changing and meeting in the middle as they’d hoped.

Now, some of those in the crowd with me clearly felt oppressed, which was evident by the cheering during Trump’s promises to rid of the past governing style and the boos during Schumer’s mention of groups he considered oppressed.

“Why do they get a mention? Why do they get a pity party when our struggles were ignored for so long?” was the evident feeling of the crowd. I was offended the first time I was amongst such a feeling, since I had written it off as brushing others’ struggles aside selfishly. But, I think it’s in desperation, in exhaustion, for similarly not having a voice for their grievances when they felt President Obama had been a significant voice for the other groups for the past eight years.

“But where is ours?” They have asked since Obama’s reelection, and Trump evidently answered the call to action.