The year 2014 brought big stories to Florida Gulf Coast University and the world. In 2014 FGCU saw students discover a new virus; the appearance and disappearance of the mobile barber shop on campus; the hockey team lose its budget – then get it back; Puppypalooza; and even  saw the 18-year-old school host its very own NCAA game.

With the first week of 2015 upon us, let’s take a look back (in no particular order) on the highlights of 2014 for FGCU and its students.

FGCU senior Shannen Wacker battles for the ball during the Eagles’ game against Auburn during the first round of the NCAA tournament at the FGCU Soccer Complex. (EN Photo / Kelli Krebs)

In March, the women’s basketball team made it’s way to the women’s NCAA tournament after defeating Stetson in the A-Sun Conference championship at Alico Arena. The Eagles took on Oklahoma State in the first round of the tournament in West Lafayette, Indiana for the program’s second NCAA Division I tournament appearance. After going into overtime, the Eagles fell to Oklahoma, 61-60.

After reclaiming the A-Sun tournament title in 2014, the men’s soccer team returned to the NCAA tournament for the third time. The Eagles flew to Myrtle Beach, South Carolina to take on Coastal Carolina University in the first round of the NCAA tournament, but fell 1-0. In the 2014 season the men’s soccer team competed against some of the nation’s top teams including No. 8 Washington, No. 23 Louisville, Brown, Portland and Akron.

The FGCU women’s soccer team saw a record-breaking season in 2014. Lead by sophomore Tabby Tindell, the Eagles earned a perfect conference season record for the first time in conference history since Kennesaw State in 2004. With only three losses through the season, the Eagles hosted Auburn University in the first round of the NCAA tournament, making it the first time in school history an FGCU team would host an NCAA tournament game. The Eagles fell to Auburn, 1-0.

After years of anticipation and promises, FGCU students were finally given the ability to track the current locations of the campus shuttles right on their phones. No longer will campus residents have to endure the game of cat and mouse when catching a shuttle to campus. Thankfully, Student Government, along with the help of the Business Operations office, released a new feature to the already existing FGCU Business Operations app that allows the user to see the exact location of the shuttles on its route. The app, available for both Apple and Android, made its debut this fall. 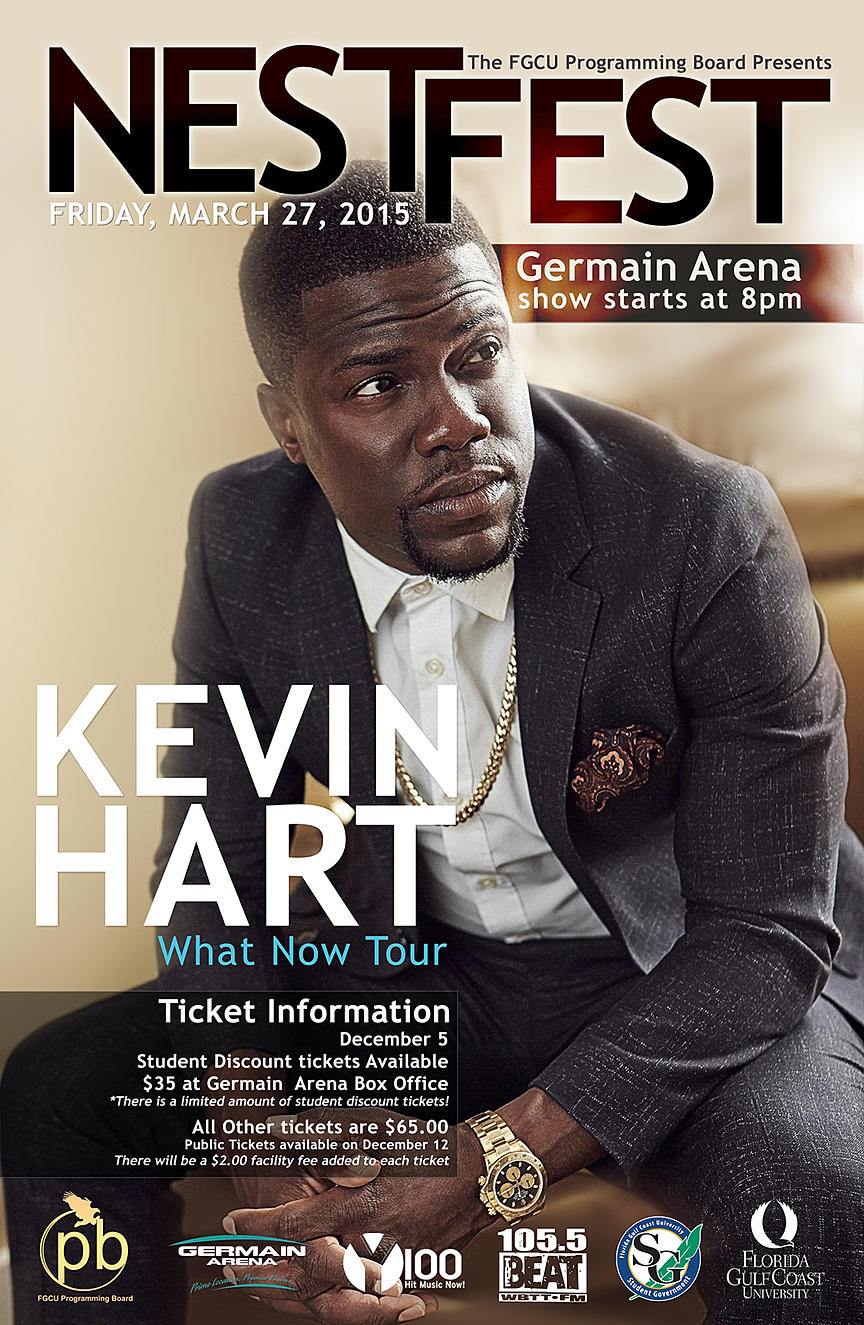 Kevin Hart will be performing at the 2015 Nest Fest on Friday, March 27.

3. Programming Board steps up its game

Finally. After disappointing bookings at Eaglepalooza and NestFest in the past couple years, the Programming Board really stepped up its game in 2014. In the spring, students were pleasantly surprised to hear the announcement of the FGCU Programing Board bringing in the popular EDM artist, Krewella, along with Logic and Radical Something to Germain Arena for NestFest. Again, I think we were all pleasantly surprised at how good the show actually was.

Between the yearly concerts and shows, the Programming Board brought us the Winter Wonderland in December. In the midst of the end of the semester, students were given the opportunity to “let it go” in a frozen wonderland, no shortage of some Florida-style snow: aka floating soap bubbles. Winter Wonderland has been one of my favorites for a while just because it’s always so well done.

But in all honesty, the announcement of the 2015 Nest Fest is really what gave the Programming Board a spot on this list. In November, the Programming Board announced that Kevin Hart, yes, Kevin Hart, will be the next act to grace the stage of Germain Arena. Without a doubt, Hart is the biggest name the school has booked since Pitbull and it’s pretty damn impressive. I’m not sure how they did it, but 2015 only looks like it’s getting brighter for student life.

After remaining closed for eight long months the Aquatic Center finally reopened its doors in June after struggles with plumbing, surprise leaks and environmental obstacles. The closing of the Aquatic Center forced the FGCU women’s swim and dive team to move practices and meets to other locations while the FGCU water polo club team was forced to cancel its season. It also forced students to swim with the freshman in the new South Village pool. With the reopening of the Aquatic Center, the lap pool gained a bit of a face lift, giving the pool more lanes and a new orientation. The Aquatic Center is still free to students with a valid student I.D.

Finally, campus expansion is no longer just a bunch of rumors and pipedreams. In 2014, FGCU made several announcements to accommodate for the extreme growth in students the school has seen over the past few years. During the summer, the South Village community saw another building go up, this time providing housing to more than 500 students, classrooms, advising offices, kitchens, a movie theater and a game room. Eagle Hall, located next to the community’s second-youngest building, Osprey Hall, and the new pool, opened for its first semester in the fall.

Later in the fall semester, the school also announced the construction of a much-needed roads that will help decongest a lot of FGCU’s traffic.

In September, Miromar Development Corporation announced that it will begin building housing for Florida Gulf Coast University students that will be available in 2016. Students will finally get the true college-campus environment we all have been hoping for so long. The University Village will be comprised of two and four-bedroom lakefront apartments in three-story garden-style buildings. The village will accommodate 1,400 students and each apartment building will be built near a central courtyard. University Village will be located just south of campus on the east side of Ben Hill Griffin and will span 100 acres.

FGCU athletics announced this fall the plans for Alico Arena, adding more athletic offices and more notably, an athlete-only gym. Finally, student-athletes will no longer have to share a gym with mere mortals – just like at a real university.

Who could forget the beatuiful library lawn’s transformation from a boring shortcut to class to a courtyard-style lawn that now plays a better host to events and busier traffic patterns.

For FGCU, 2014 was a great year in taking steps toward becoming the big state school that none of us could get into – also a great year for local construction workers. Now if we could only get a parking garage near Alico…

ALSO READ: Things we should leave in 2014

*Correction: an earlier version stated that The Programming Board hosts PuppyPalooza. Campus Rec and the Wellness Center are responsible for the event.