Should Ex-Felons Have the Right to Vote?

A felon is someone who has committed a crime that is punishable by a term in state or federal prison or even death. Regardless of what crime was committed, felons are still humans with rights. Certain American rights become stripped away from felons and ex-felons after conviction; specifically, the right to vote.

Most states in the U.S. restrict voting rights of ex-felons. In 14 states and the District of Columbia, felons cannot vote only while incarcerated and receive their right restored when released. In 21 different states, felons lose their voting rights while incarcerated and for a period of time after released, typically the length of their parole. In a different 13 states, felons lose their right to vote indefinitely. 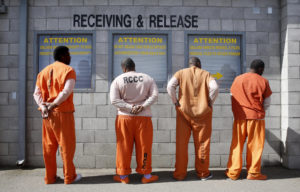 FILE – In this Feb. 20, 2014, file photo, prisoners from Sacramento County await processing after arriving at the Deuel Vocational Institution in Tracy, Calif. One amendment in the upcoming election will decide if ex-felons get the right to vote. (AP Photo/Rich Pedroncelli, file)

The whole purpose of felons serving time in jail it to face punishment and come to accept the crime(s) they were convicted of. Many felons who are released wish to have a fresh start and be better people following, so if we take their right to vote away, doesn’t that limit their abilities to make a difference in their country?

Ex-felons who are no longer on probation shouldn’t be punished any further with not having a right to vote. If someone has a sane state of mind and an opinion, they should be able to have a say to what happens in our free nation.

In the state of Florida, more than 10 percent of adult felons are banned from voting. That means around 1.5 million people in Florida cannot vote, even though their sentences and probation are complete. How is that fair? How does that give them freedom back after they have served their time?

The only way for felons to be able to vote again is if an official approves the request. It is not fair for a person’s right to vote to be determined by a state official; the official could be biased, racist or even sexist.

Once a felon has completed their jail time and parole, they are to be considered a free person. Many people do not understand that concept because all they see following is a felon rather than a person. It can be challenging for felons to find jobs, sign on a home or even take out a bank loan. With all these struggles, our state officials make it even harder by taking away their basic right to vote. Many felons must ask themselves if they are even truly free.

The Florida Rights Restoration Coalition is a membership organization hoping to  end disenfranchisement against felons. They have gathered more than a million signatures for a constitutional amendment which would restore voting eligibility to most felons after their sentences have been completed.

The Constitution says that this is a free country, but our country isn’t always giving free people a right to vote. How does that make any sense? It doesn’t, it is because the world depends on social class and order. Statistically, most felons are of African American or Latino ethnicity which are minority groups. In reality, not giving these people the right to vote is perhaps in some way suppressing the vote of minority communities.

The U.S. is the land of the free and therefore should practice being just that. If someone is free by law, they should have the right to vote, no matter their past. The world needs to focus on the future instead of staying hung up on the past. Ex-felons are people just like the rest of us, so they also deserve the right to have a say in the future of our nation.