The benefits of adopting over shopping 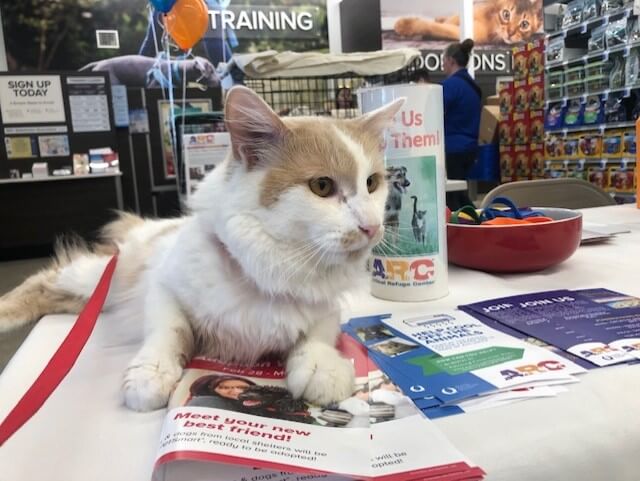 The Animal Refuge Center, located in Fort Myers, brings cats to a PetSmart in Naples for weekend adoptions. Southwest Florida is home to several humane societies and shelters that are dedicated to giving unwanted or abandoned animals a second chance. Photo by Samantha Roesler

The well-known slogan ‘adopt, don’t shop’ is used by animal rights activists to promote the health and welfare of domestic animals.

Southwest Florida is home to several humane societies and shelters that are dedicated to giving unwanted or abandoned animals a second chance.

People seeking a new furry friend should consider rescuing from a local shelter rather than purchasing an animal from a breeder.

Carey Kendzior is the Director of Doghouse Rescue Academy in North Fort Myers.

“I am so passionate about animal rescue, and I’ve never felt like my mission in life was clear until I started doing this,” said Kendzior. “It has changed every aspect of my life, and if you love animals, figure out how to do things on a local level.”

Doghouse Rescue Academy is a non-profit, re-homing facility that focuses on educating potential adopters about the rescue process.

Kendzior said one of the main reasons people should adopt, rather than shop, is to protest the animal overpopulation crisis this country battles daily.

According to Florida Animal Friend, approximately 3.7 million animals are killed in shelters each year due to the lack of adopters willing to take them.

Another advantage of rescuing an animal from a shelter is the adopter receiving a fully-vetted animal.

Before the animal is sent to its new home, it is vaccinated, microchipped and in healthy condition.

Mandatory spay/neuter laws in the state of Florida also require shelters to sterilize animals before their adoption, in an attempt to combat procreation.

Monica Seif is a board member and volunteer for SPAY LEE, an animal welfare organization in Lee County. Their mission is to educate the community on low-cost sterilization options, shelter animals in need and prevent animal cruelty.

“Breeding animals for the sake of profit or because someone wants a certain breed is highly unnecessary,” said Seif. “There are plenty of dogs and cats awaiting homes. The need to rescue is great, and there is no shortage of available rescue animals.”

Seif also said approximately 70 million stray animals are living in the U.S., which equates to about five homeless animals for every homeless person in the country. SPAY LEE also works to combat the mistreatment and abuse of animals.

Gulf Coast Humane Society (GCHS) is also active within the SWFL community and is another organization for people to consider when looking to adopt. The organization occasionally tables outside of Seidler Hall on FGCU’s campus.

“I have always been an animal person, so being able to combine my passion and career is a blessing,” said Purdy. “There are 1,000s of pets looking for a forever home. They are grateful to you for being their person and choosing them.”

GCHS is always looking for new volunteers to help at the shelter. Some FGCU students choose to volunteer there to earn service-learning hours.

The benefits of adopting will not only impact the animal rescued but will positively affect the life of the rescuer forever.

“I think younger people have a more ethical sense of standards,” said Kendzior. “College students have a lot of impact and influence. Every generation seems to get more expansive in its commitment to ethical issues. They are the future.”