Back in The Dance 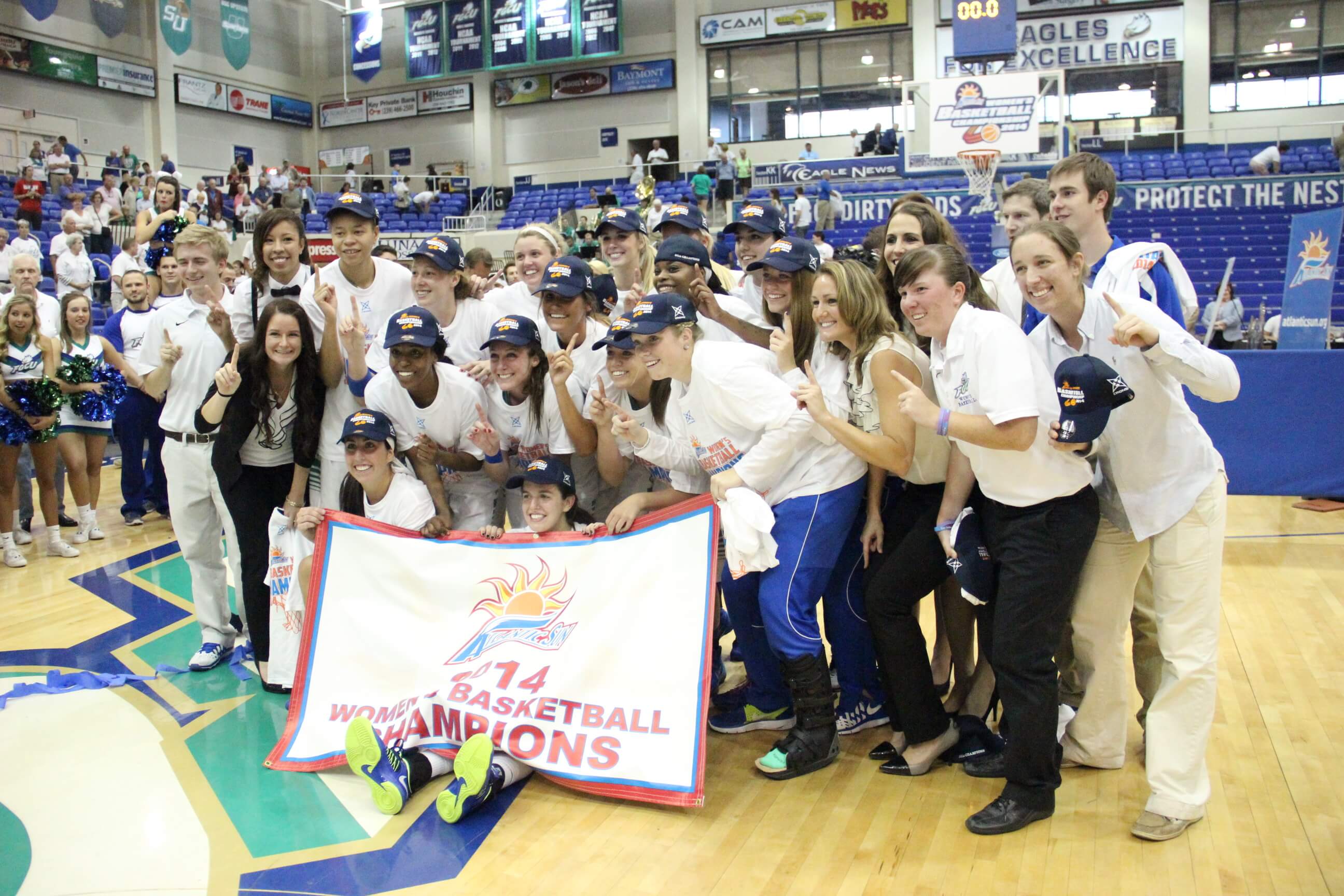 For the second time in the last three years, the Florida Gulf Coast University women’s basketball team beat the Stetson Hatters in the Atlantic Sun Conference final at Alico Arena, 72-70, and is advancing to the NCAA tournament.

“I am so proud of our team in the way that they were able to pull out this game, keep their composure and play so well during the overtime period,” FGCU head coach Karl Smesko said. “Stetson is the best Atlantic Sun team that we’ve faced since we’ve been in the A-Sun.  Just like a week ago, it was two really good teams playing really good basketball and we feel fortunate to win and to get the automatic bid to represent the conference in the NCAA Tournament.”

Jenna Cobb, the 2014 A-Sun Tournament MVP, scored 19 points with five three-pointers, led the Eagles alongside Kaniesha Atwater, who also had a double-double with 14 points and 11 rebounds.

“First of all Jenna (Cobb) is a great player and I think it was a misconception early in the season because she struggled shooting the ball early but nobody on the team thought anything of it except for Jenna,” Smesko said. “In practice, Jenna is an amazing shooter not just a good shooter. She had fixed her form, but then she would get in a game and the pressure would make her revert to her old shot. She worked on it and worked on it and came in extra, now when she releases it in the game it is just like in practice.”

The Eagles trailed 31-27 at the half, but came back to lead by eight at one point in the second half. Momentum shifted back the Hatters way with 2:13 left in the second half when redshirt sophomore Whitney Knight fouled out. Stetson would score two buckets in the final minute to send the game to overtime at a tie at 60.

Free throws by Amanda Moore, Atwater and Sarah Hansen proved to be key going 6-of-9 from the free-throw line in the overtime period and propelled the Eagles to the two-point victory.

“I don’t think Amanda Moore played much or any of the game and I went to the end of the bench and said ‘if I put you in and shoot some free throws are you going to make them?’ She told me yes so I said ‘get in there.”

In Hansen’s final game at Alico Arena, the lone senior scored 13 and added eight rebounds while joining Cobb and Atwater on the all-tournament team.

The Eagles out-rebounded Stetson, 37-34, mostly without their 6-foot-3 guard Knight in the game. FGCU outshot the Hatters by a slight margin at 42.9 to 42.6 percent.  In the overtime period, the Eagles went 75 percent from the field compared to Stetson, who shot just 33 percent.

‘It was a great game for women’s basketball,” Stetson head coach Lynn Bria said. “You had two teams battling going back and forth and it was like a dog fight out there. I think our kids battled in a tough atmosphere and got a lot of good looks, but we just didn’t put the ball in the basket.”

The women’s basketball team is the first FGCU team to reach the NCAA tournament in the 2013-14 calendar year.

“Whether we win or lose, we want to represent FGCU well,” Smesko said.  This year, FGCU has had great teams in a lot of sports and for whatever reason one play here and one play there has cost us some NCAA tournament bids.”

Cobb added, “It all started last year in the championship game when we lost and thought well we need to break the spell that has been happening all year. That is why I came here, we win at FGCU and that’s across all the sports here at FGCU.”

FGCU advanced to the NCAA Tournament in 2012 as a No. 12 seed and lost to St. Bonaventure in overtime. This year’s preparation is to go deeper in the tournament.

“We’re there and we are going to prepare for a win,” Smesko said. “We aren’t going there being happy with the fact that we got there. We plan on representing the A-Sun conference and FGCU really well.”

The Eagles learn its matchup today at 7 p.m. Fans are encouraged to join the team at Alico Arena for a Selection Show Viewing Party.  The doors will open at 6 p.m. with the event scheduled to begin at 6:30.  The live show will begin at 7 p.m. on ESPN and will feature live action shots from Alico Arena.

“First off, it’s great to be there and we know we will probably be playing a top 25 team in the nation in the first round,” Smesko said. “We’re up for a great challenge, but the fact that we play a dramatically different style and depending on what the matchup is, I don’t think anybody will be looking forward to the way we play. I don’t think it’s something they’ve ever seen before or had to go against. When you can shoot the ball from the perimeter it gives your team a chance even if teams are bigger and more talented if you shoot a high enough percentage. This team is definitely capable of winning NCAA tournament games.”