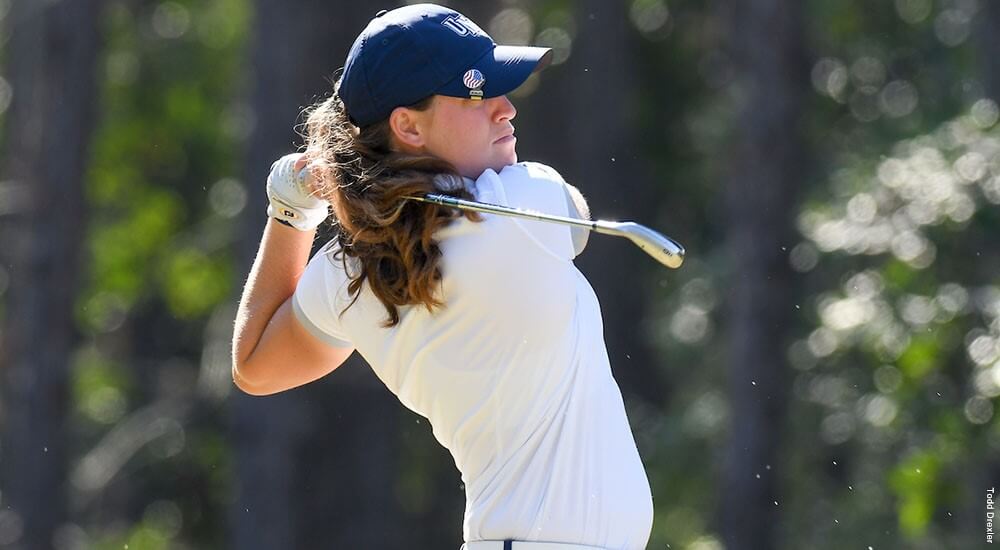 Photo courtesy of UNF Athletics // Cobb cometes in a tournament as a redshirt senior at the University of North Florida. Cobb recently finished her collegiate career at UNF in the spring of 2018.

Courtney Cobb has been named as one of FGCU’s women’s golf assistant coaches for the upcoming season.

“I feel honored to be joining the FGCU family this fall,” Cobb said.

“I’d like to thank Coach Trew and the athletic department for giving me this great opportunity.

“The women’s golf program has been very strong over the past few years, and I’m excited to be a part of it.”

Cobb, a Jacksonville native, recently finished a successful collegiate career with the University of North Florida.

During her time at UNF, Cobb was a two-time Women’s Golf Coaches Association (WGCA) All-American Scholar.

She was also named UNF’s most improved female athlete in her senior year.

She also made strides her junior year, posting a season-low in the Amelia Island College.

This as also her career-low until her senior year, when she played a 69 at the Pinehurst Challenge.

After suffering an injury in the fall of 2015, Cobb was awarded a medical redshirt.

Prior to her injury, she played two seasons at Daytona State College as a member of the National Junior College Athletic Association (NJCAA) national championship team as a freshman.

She finished 12th individually at nationals.

“Courtney is going to be a phenomenal addition to our program,” FGCU head coach Sarah Trew said.

“The assistant is always a big key to any program, and we have a rock star with Courtney.

“She knows a good number of our team members so her transition should be seamless. We are all excited to have her join the Eagle family.”

Cobb received an undergraduate degree in sports management from UNF in the spring of 2017 and is in the progress of receiving a master’s in education leadership.

The women’s golf team will begin their season in early September with the Golfweek Program Challenge in Pawley’s Island, South Carolina.