Dunk City expands its horizons to the Bahamas 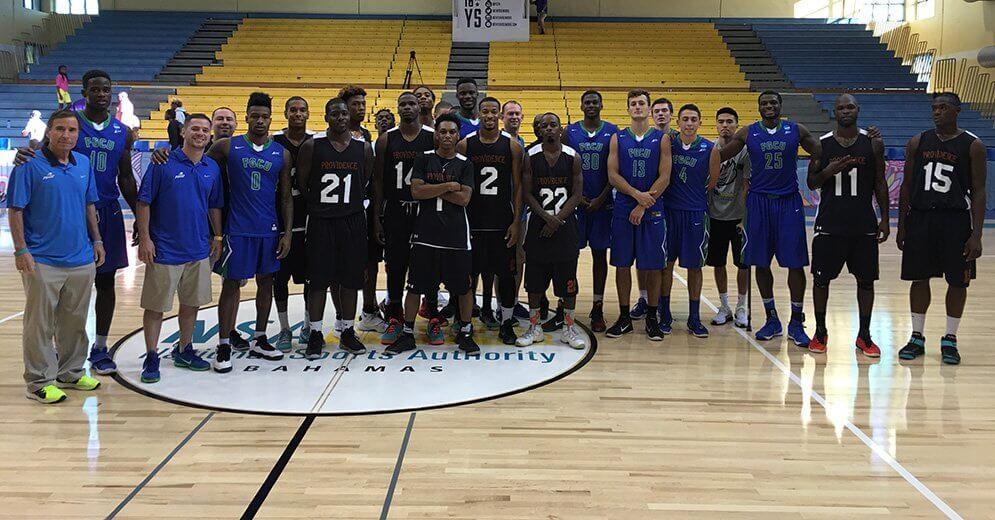 After a year where the Eagles captured an Atlantic Sun tournament title and a win in the NCAA tournament, the FGCU men’s basketball team traveled to the Bahamas for a little team bonding and basketball as they played three exhibition games against professional players overseas and members of the Bahamian national team.

During their first exhibition matchup against Caribbean professional side Providence Storm, head coach Joe Dooley and the Eagles found themselves in an interesting situation in the last two minutes of the contest.

With 10 members of the team traveling to the Bahamas and only eight players available to compete, FGCU found itself down to only four players with an 88-83 with just 1:36 remaining. With 40 seconds remaining the Eagles lost another member of the team due to foul trouble leaving Christian Terrell, Maxx Bleecher and Kevin Mickle to defend an 89-87 lead.

The Storm were able to tie the game at 89 with numbers on their side, but the Eagles were able to hang on after Mickle made a free-throw to push the lead back to one before Terrell secured the contest scoring two of his 19 points at the line to give the Eagles a 92-89 victory.

After an entertaining end to its first game, FGCU was able to avoid foul trouble cruising to a 113-58 victory against the Mr. Ship Regulators.

“It was good to play against man-to-man defense (as opposed to zone in Game 1 on Saturday), and we were able to move the ball a little bit better,” said Dooley. “Our newcomers did a much better job today. Brandon, RaySean and Christian Carlyle all gave us big lifts.”

Behind UCF transfer Brandon Goodwin’s near triple-double performance finishing with 22 points, 10 assists and nine rebounds the Eagles’ offense clicked on all cylinders finishing the first quarter up 28-2.

Matching Goodwin’s scoring was newcomer RaySean Scott Jr. as he contributed on both sides off the ball for FGCU scoring 22 points and grabbing 17 rebounds to add to the team’s 79-33 rebounding advantage.

With a perfect 2-0 record going into their final matchup, FGCU never found itself trailing for the second consecutive contest earning an 87-69 win over the Pyramid Food Rockets.

The Eagles were once again led by Brandon Goodwin, scoring 19 points and grabbing 11 rebounds to record his second double-double of the trip.

During their trip, the Eagles averaged 97 points per game shooting 46.5 percent while holding their opponents to shoot 31.3 percent from the field.

“Brandon Goodwin gave us great energy and Christian Carlyle continued his great play,” said Dooley. “We weren’t very crisp, but I wasn’t really expecting us to be, and overall the practices and trip were good team bonding experiences for us.”