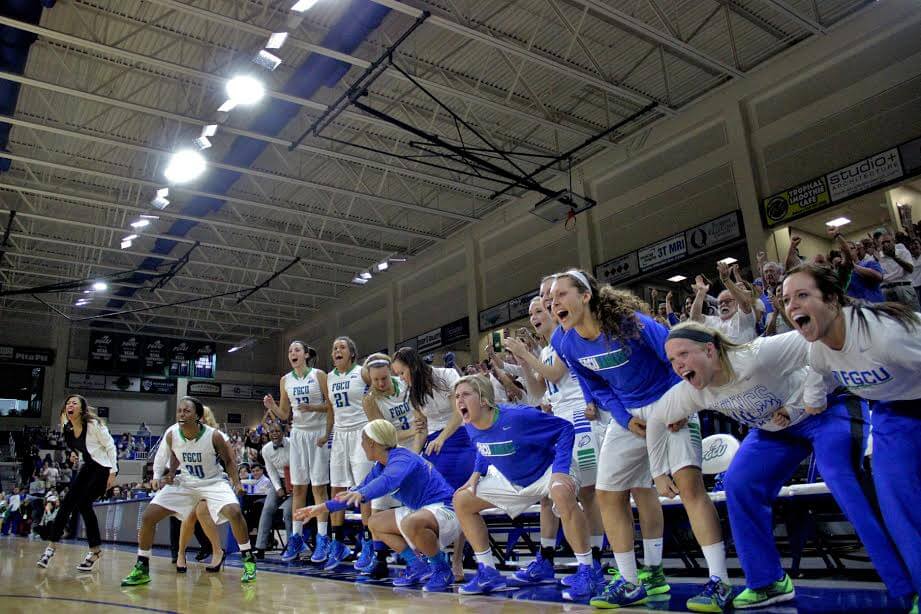 The Florida Gulf Coast University mens basketball team extended its win streak to six games over the weekend with a crucial road win in DeLand over the Hatters of Stetson University.
Brett Comer was the driving force behind the Eagles’ strong performance, coming up just two rebounds short of registering FGCU’s first triple-double in program history. Comer finished with 21 points, 12 assists and eight rebounds, his most well-rounded stat line since he became an Eagle.
In addition, Demetris Morant finally had the type of impact that many expected him to have when the 6-foot-9 UNLV transfer announced he was coming to Dunk City. Morant was a key player down low for the Eagles in the game, scoring just nine points but making a huge impact with 11 rebounds and seven blocks.
FGCU struggled early, but a timely three-pointer from Comer helped spur a 15-1 run going into half where FGCU didn’t allow a Stetson point for almost eight minutes. Coach Joe Dooley’s defensive mindset seems to finally be sticking with his guys, and the results are indisputable.
“We got off to a slow start and took a lot of deep and hurried shots early in the first half. But we settled in on offense and starting getting some stops at the defensive end, which helped our offense,” Dooley said. “Our ball movement was much better in the second half, and the job Brett and Demetris did was phenomenal in giving us production and energy that we needed.”
Stetson struggled shooting the ball, going only 26.8 percent from the field and “Florida Gulf Coast had a lot to do with that,” said Stetson coach Corey Williams. “Contested shots, making us take our shots a little bit quicker, but obviously we’re very disappointed.”
Despite coming into the weekend contest riding a three-game win streak of their own, the Hatters failed to appease their biggest crowd of the season (2,642), more than double the attendance of any other home contest, according to the FGCU basketball website.
The 67-51 victory moved FGCU to 17-7 on the season, the Eagles’ best start since jumping to DI in 2007. In addition, the 7-1 Atlantic Sun record means the Eagles are one game ahead of last season’s pace in conference play, when they were 6-2 after eight games.
FGCU is back on the road again this week, traveling to Northern Kentucky and Lipscomb for two weekend matchups. The Eagles have already beat both teams in the friendly confines of Alico Arena, but going on the road and collecting two victories will be no small task.
Both games will be televised on ESPN3.