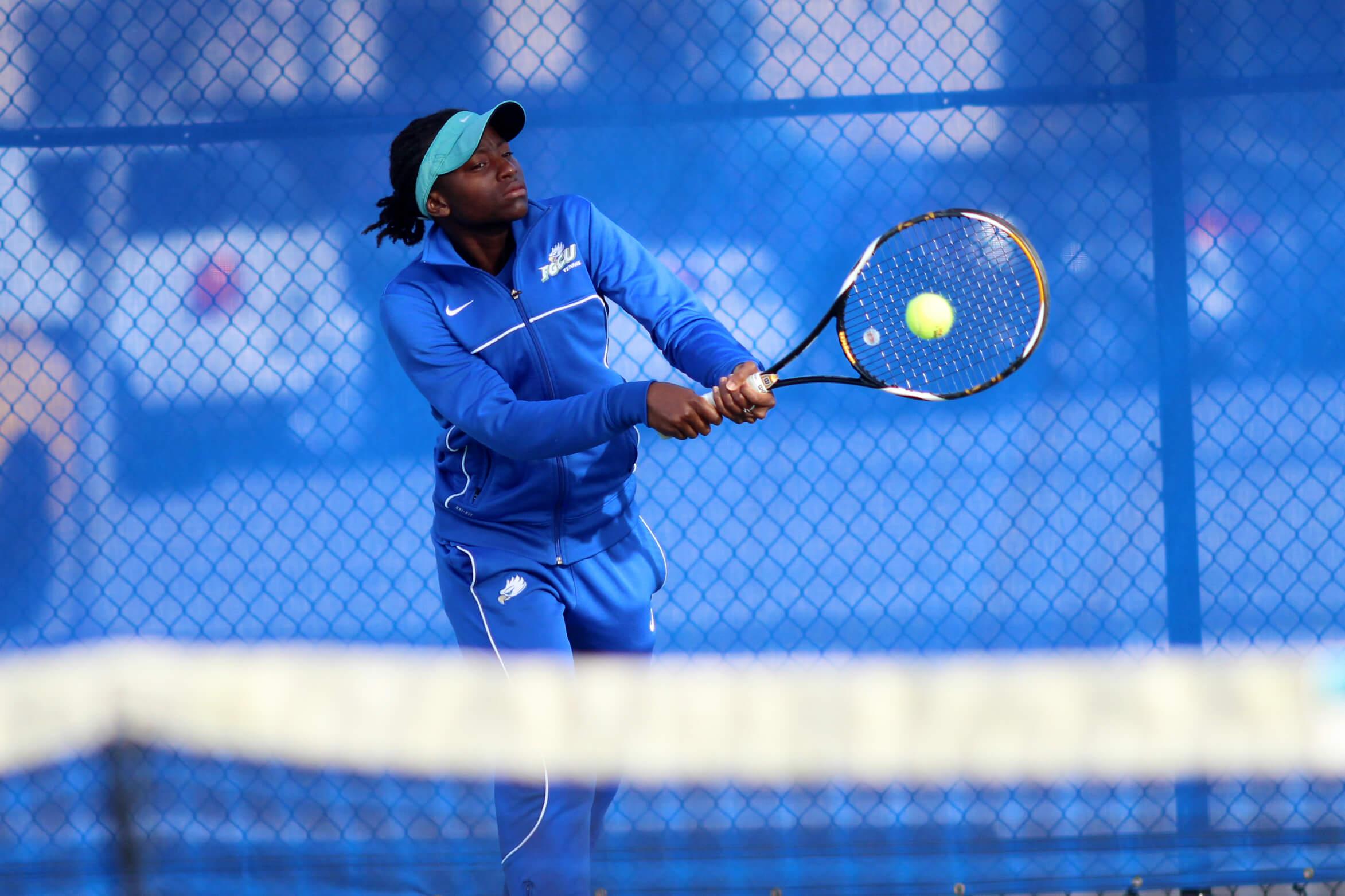 The Florida Gulf Coast University women’s tennis team (10-12) fought its way to the Atlantic Sun Conference Championship final on Sunday after defeating Kennesaw State University (3-14) and Stetson University (15-5) in the quarterfinal and semifinal matches over the weekend. It was the first time in program history that the team played in the A-Sun Championship final, although the Eagles lost the match to the University of North Florida.
“We were so excited,” Elizabeth Means said. “We knew we could do it and were highly motivated and so focused. We gave it all we had.”
On Friday, the team defeated No. 6 seed Kennesaw 4-0 in the quarterfinals. They Eagles started off securing the doubles point with wins from senior Candela Munoz Giron and sophomore Breana Stampfli.  Senior Sarah and junior Elizabeth Means also won their match 8-3 against their KSU competitors.
The team carried the momentum into singles where Landert, Munoz Giron and Stampfli secured wins in their matches. Stampfli won her singles match 6-1, 6-0. Munoz Giron won her match 6-1, 6-2 and Landert secured the victory with a 6-3, 7-5 win. Sarah Means, Elizabeth Means and junior Johanna Sterkel were up in their matches, but did not need to finish because they were playing clinch style.
On Saturday the team defeated Stetson 4-1 in the semifinals. The team lost to Stetson last weekend 4-3, but came back to sweep them in the semifinals. They reviewed their opponents’ games and came up with individual strategies heading into the match.
“We knew we could beat them,” Elizabeth Means said. “We had a lot of energy and a lot of focus and reviewed our strategy beforehand.  We just really wanted to come out with a lot of energy.”
The Eagles secured the doubles point and then Sterkel, Stampfli and Munoz Giron won their matches to get the victory. Sterkel won her first set 6-0 and then fought in the second set to win 7-6. Stampfli beat her competitor 6-0, 6-0 and Munoz Giron won her match 6-3, 6-3.
In the finals, the team faced the No. 1 seed University of North Florida (17-3) on Sunday. The Eagles started the match losing the doubles point and were not able to come back in singles play, falling to the Ospreys 4-1. Sterkel was the only player to come out with a victory in her match. She defeated UNF’s Michelle Valdez in the No. 2 slot 6-4, 6-3.
“We felt we had a really great opportunity,” Sarah Means said. “We were excited for each match we won. Obviously, we didn’t get the results we wanted, which was disappointing, but we were able to do something unprecedented in the program so that was really exciting and gave us a lot of energy.”
Sterkel and Elizabeth Means were named to the A-Sun All-Tournament Team for their performance in the championship. Before the tournament, Sterkel and Sarah Means were named to the First Team All-Conference while Munoz Giron earned second team all-conference in the No. 4 singles position. Elizabeth Means and Sarah Means were also second team all-conference in the No. 1 doubles position.
“Coming in my freshman year I didn’t know what to expect,” Sarah Means said. “My only goal was to leave the program better than when I came. I wanted to help the team grow and I felt like I did that.  I’m happy that my sister came to play here because she could have benefited any school in the country and she came and played with me and it was a blessing.”