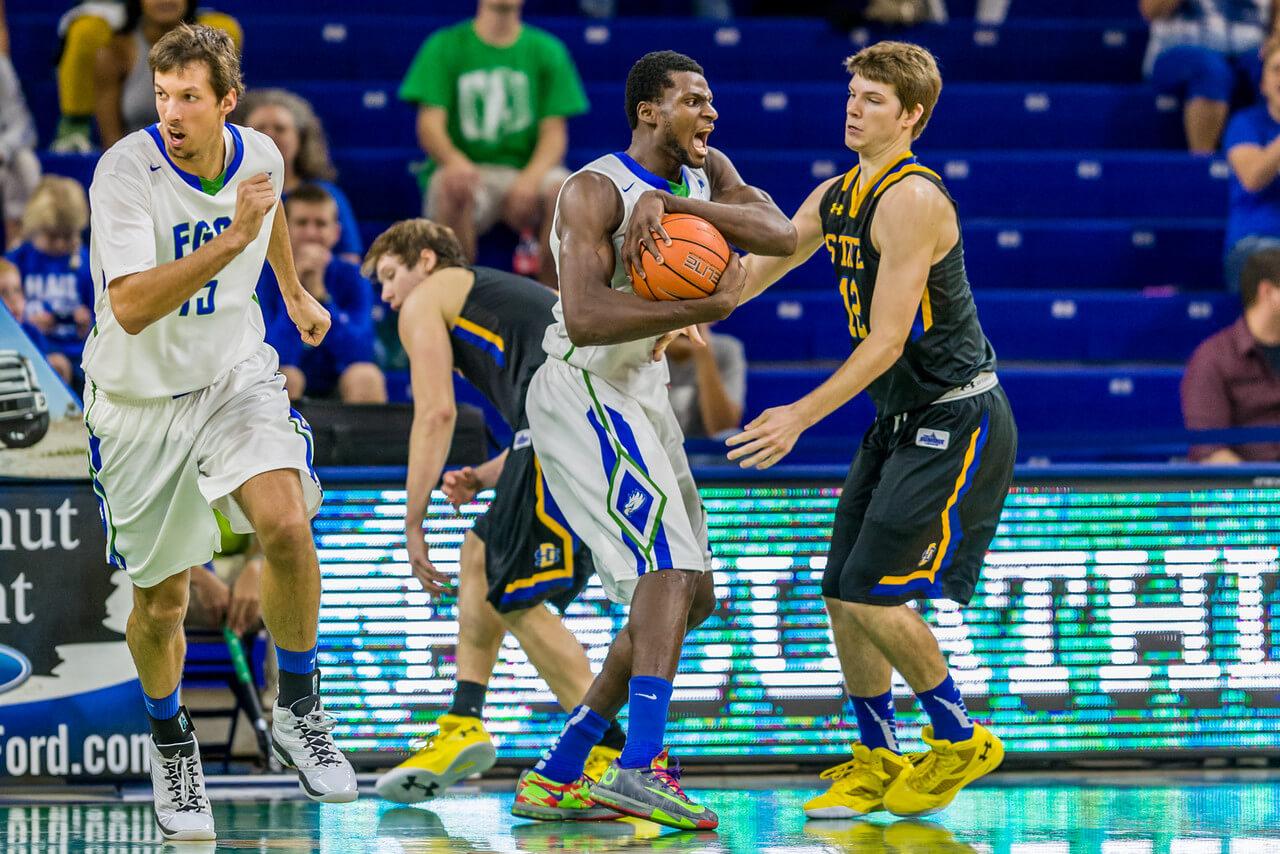 The first half was rough for FGCU and just the opposite for the Coyotes. FGCU was plagued by turnovers. South Dakota’s standout player, Casey Kasperbauer, started out 3-3 from three-point range. Kasperbauer also had 12 of the Coyote’s first 14 points. For the Eagles, sluggish isn’t the word to describe the first half offense.

By the 15-minute mark, the Eagles had more turnovers than points. The Eagles were scoreless for an entire 5 minutes. FGCU forward Filip Cvjeticanin finally ended the scoring drought with a three around the 12-minute mark.

The only positive to take from the first half was FGCU’s pure dominance on the glass, especially at the offensive end. The Coyotes made a mockery of the Eagles with their barrage of three pointers. Ironically, the Eagles led the nation in three-point defense coming into this game.

Kasperbauer was lights out from the three-point range for USD, while recording five first half threes and 19 first half points. He, along with Shy McClelland, was wreaking havoc on the FGCU guards, finding the lane and poking the ball loose on the defensive end.

The most crucial flaw for the Eagles, on Monday, was turnovers. This is what widened the gap. On top of that, the constant Achilles’ heel of the Eagles’ free throws cost them once again. All of FGCU’s top scorers were quiet in the first half. The first half concluded at 35-22 with South Dakota on top

To start out the second half, the Eagles record their 12th turnover. Head coach Joe Dooley had no other words to describe the multitudes of turnovers but “ridiculous.”

The game became very active on both sides of the floor. There was a bombardment of blocks on both teams. You could see the Coyote guards think twice about driving on the long arms of Marc-Eddy Norelia and Demetris Morant. A run led by USD’s McClelland torched the Eagles. The Coyotes had 11 assists compared to the Eagles three. The offense was all discombobulated for the Eagles. The savior for the Eagles was the full-court press that switched the tide of the game.

“The end of all three periods cost us the game,” said Dooley. “We were awful in the first half turning the ball over, and at the end of the second half we said no three-point plays, and we gave up a three-point play. And then in overtime we have it at a one-possession game and can’t convert on defense and then turn the ball over.”

The turnover totals escalated quickly for South Dakota in response to the second-half pressure. This cost USD to relinquish the lead to the Eagles for the first time in the game with seven minutes to go. From then on, it was a blow-for-blow match. Several key players fouled out of the contest. USD’s Shy McClellan fouled out at 2:14, FGCU’s Rayjon Tucker fouled out with 33 seconds left, and USD’s Eric Robertson fouled out in overtime.

The Eagles leading scorer, Christian Terrell, found a way to come out of the dark and scored 20 as he battled Robertson down low. The game transpired into a Terrell vs. Kasperbauer, as both players tried to lead there team to victory. Terrell finished with 25, and Kasperbauer finished with a whopping 31. Kasperbauer was 50 percent from deep. Other commendable performances included FGCU’s Julian DeBose with 12 points and USD’s Tre Burnette’s 16 points and 10 rebounds.  In the end, both teams couldn’t handle the rock well at all. Nevertheless, the Coyotes shot the ball better than FGCU did and caused turmoil on defense, leading to FGCU’s 21 turnovers. FGCU’s trump card in the full-court press did not pull through for them. For every coach, it’s a challenge to combat the full-court press when you have defenders like FGCU does.

“The press bothered us,” said Coach Boots of the Coyotes. “They got us on our heels, but our guys know how to win close games.”

USD knew how to get key defensive stops, as demonstrated it in the final moments of the game. A late surge by USD and a critical stop by No. 32 D.J. Davis sealed the game away.

The Eagles flew home with a loss but take on La Salle in Alico Arena on New Year’s Eve.