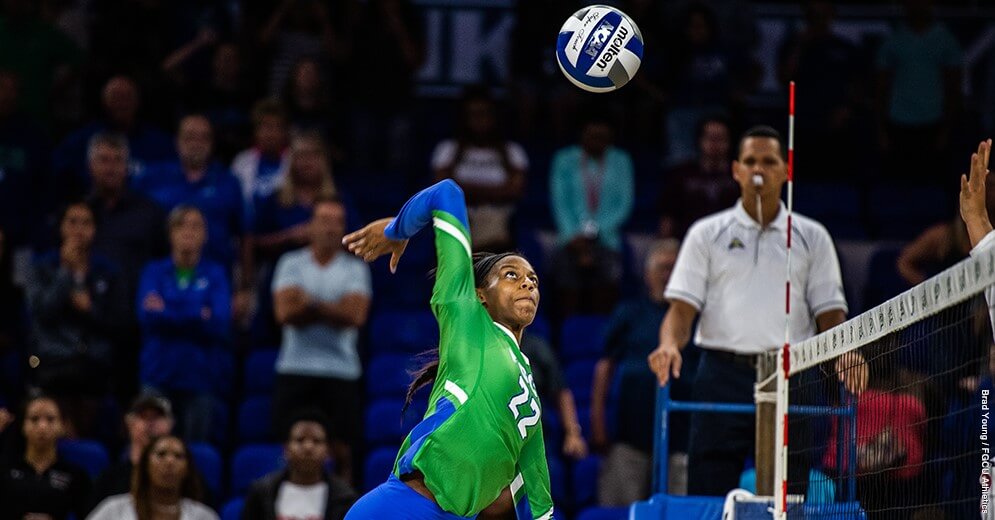 FGCU Volleyball (21-3) defeated North Alabama Sunday afternoon in three straight sets (25-14, 25-6, 25-22) as the Eagles continue their dominating streak of 11 straight wins. The impressive streak includes 16 straight-set wins over the last six games and their 21 win total is the fourth highest in the nation.

A 25-14 first set was highlighted by three kills from Cortney VanLiew and Chelsey Lockey’s four assists. FGCU as a team in the match hit a solid .356 hitting percentage while holding North Alabama to a .067 hitting percentage.

After a dominating first set, the Green and Blue followed up their performance with a blowout second set. The tone was set with a 14-3 lead for the Eagles as Tori Morris slammed her fifth kill of the match. Morris finished with a team-high 10 kills in the match, as well as 6 blocks.

Cortney VanLiew’s eighth ace of the match put the exclamation mark on a 25-6 second set FGCU victory. North Alabama wouldn’t make a sweep easy for the Eagles as the Lions took a 14-11 lead in the third set. The Eagles battled back with three straight points to take the lead.

Tori Morris continues to shine in the latter part of the season as she posted 10 kills and six blocks against the Lions, matching her season-high block total she set against Cleveland State on Sept. 14 and recording seven or more kills in three of the last four matchups.

Senior Daniele Serrano made history as the Eagles swept North Alabama, moving into second place in ASUN history in career blocks. Serrano is now 39 blocks away from becoming the all-time leader in blocks in the ASUN.

With their 11th win of the season, FGCU jumps into sole possession of first place in the ASUN as UNF upset Kennesaw State to break the tie.

FGCU looks to extend their winning streak at home against Liberty on Tuesday, Oct. 29. The Eagles look to even the tide against the Flames, as they handed the Green and Blue their lone ASUN conference loss this season.