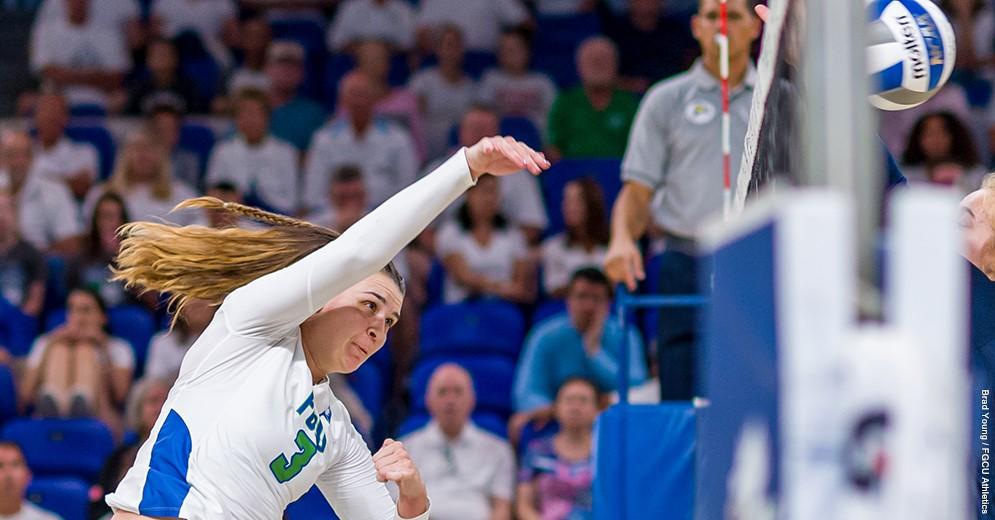 FGCU volleyball clinched at least a share of the regular-season Atlantic Sun on Sunday, sweeping Lipscomb 25-21, 25-19, 25-14. The Eagles bounced back after their 14-game winning streak was snapped, with a statement road win.

A back-and-forth first set put the Eagles on the ropes down 21-19 and was looking for a spark. FGCU exploded with 6 straight points to clinch the first set win, led by Cortney VanLiew’s team-high 5 kills in the set.

Cortney VanLiew dominated the match with 16 kills and helped the Eagles to a .268 hitting percentage. VanLiew along with Amanda Carroll’s two late kills gave the Eagles a second set win 25-19.

The Eagles cruised to a title-clinching third set 25-14, the program’s second straight title and their fifth in their history.

“This group has been so steady all season,” FGCU head coach Matt Botsford said. “I am happy to see them rewarded with a championship. They are a motivated group and have really worked hard to put themselves in this position. There is still work to do, and we are looking forward to getting back in the gym and finding ways to improve ourselves even more.”

Daniele Serrano inched closer to making some history of her own with 7 blocks on the night, moving her just eight blocks shy of the all-time ASUN record of 474 blocks in a career.

FGCU can clinch the ASUN outright with a win over NJIT on Friday night’s regular-season finale. The Eagles will be on the road at 6 pm Friday night with hopes of bringing a championship home to Alico Arena