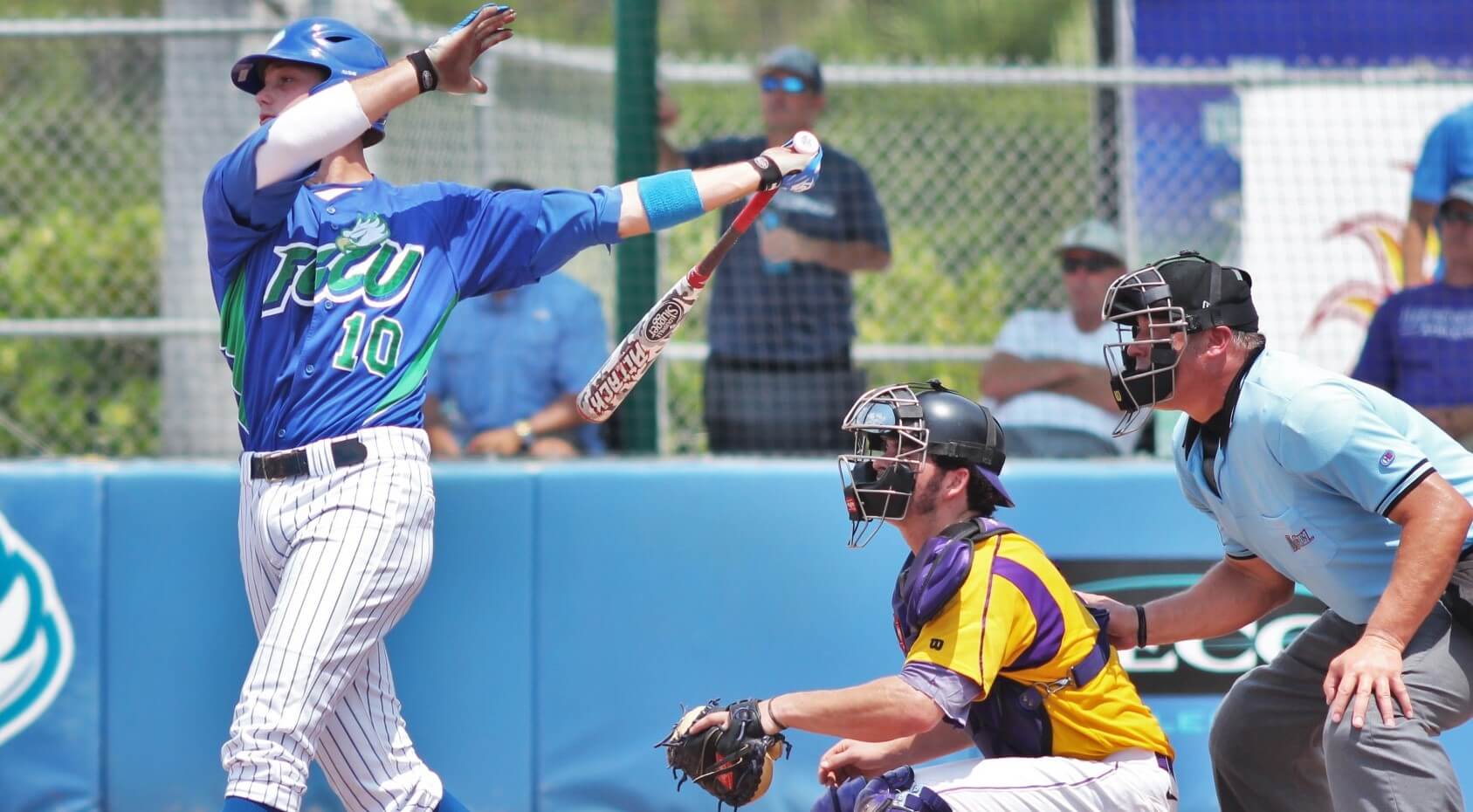 In the first inning, Colton Bottomly slides into home to give the Eagles a 1-0 lead. Kelli Krebs / Eagle News.

The FGCU Eagles came into the game Saturday afternoon with a chip on their shoulder and looking for revenge after taking a one-run loss to No. 4 Lipscomb Thursday night in the Atlantic Sun Conference Tournament.

With a 10-5 win, the Eagles will play Lipscomb in a tie-breaker rematch today at 5 p.m. to determine who will advance to the final against Kennesaw State.

The Eagles came out into the game with bats blazing, knocking in three runs in the first inning.

With bases loaded, first baseman Nick Rivera stepped up to bat. Rivera sent a single up the middle, narrowly missing the dive of Lipscomb’s short stop, to give FGCU outfielder Colton Bottomely enough time to slide into home plate and give the Eagles a 1-0 advantage.

After reloading the bases, the Eagles did it again. This time a single down the middle of the field from catcher Blake Berger gave the opportunity to both Rivera and Michael Suchy to cross home plate and increase their lead to 3-0.

Zach Tillery looks up at his hit during the Eagles elimination game against LIpscomb in the A-Sun Tournament. Kelli Krebs / Eagle News.

In the second inning, the Eagles did it… again.

With Rivera, Bottomly and Jake Noll on base,  Zach Tillery sent a bomb sailing over the left field wall to secure the game and give the Eagles a 7-0 lead.  Tillery’s grand-slam today was the first of this year’s A-Sun Tournament and — home run of the season.

The Bisons thwarted a complete shutout from the Eagles  in the fourth inning. Lipscomb catcher Nick Rome singled down left field to bring home Tyson Ashcraft and set the score to 7-1.

The Eagles shut down Lipscomb’s attempt for a comeback with two more runs in the fourth. Rivera doubled down left field giving  Suchy the chance to answer the Bisons’ run earlier in the inning. Rivera then crossed home plate to bring the score to 9-1 before the end of the inning after a ground ball to second from Tyler Selesky.

Lipscomb made another attempt for a comeback in the top of the sixth with a single from Tyler Bethune, to bring in Hunter Hanks. After several pitching errors and walks, the Bisons managed to load the bases. With two outs, three balls and two strikes ,  Johnathan Allison grounded to third baseman Zach Tillery who managed to throw out Allison at first to end the inning. The Eagles would finish their scoring in the sixth after Alex Diaz flied out to left field to let Selesky come in.

In a messy ninth inning, the Bisons managed to bring in three more runs. A single from Lipscomb’s Ashcroft, a walk-in from FGCU’s relief pitcher, Garrett Anderson, and a ground to short stop would earn the Bisons three more runs and end the game, 10-5.

FGCU’s offense wasn’t the only key factor in this win. FGCU left-handed pitcher Nick Deckert (7-5) pitched nearly a complete game, only giving away eight  hits, walking three, while striking out five through 38 batters. In the eight inning, Deckert was relieved by Garrett Anderson who finished the game for the Eagles and struck out one, walked one, and gave away one hit.

The Eagles and the Bisons will face off again today at 5 p.m. for a tiebreaker to determine who will advance to the final tomorrow against Kennesaw State.