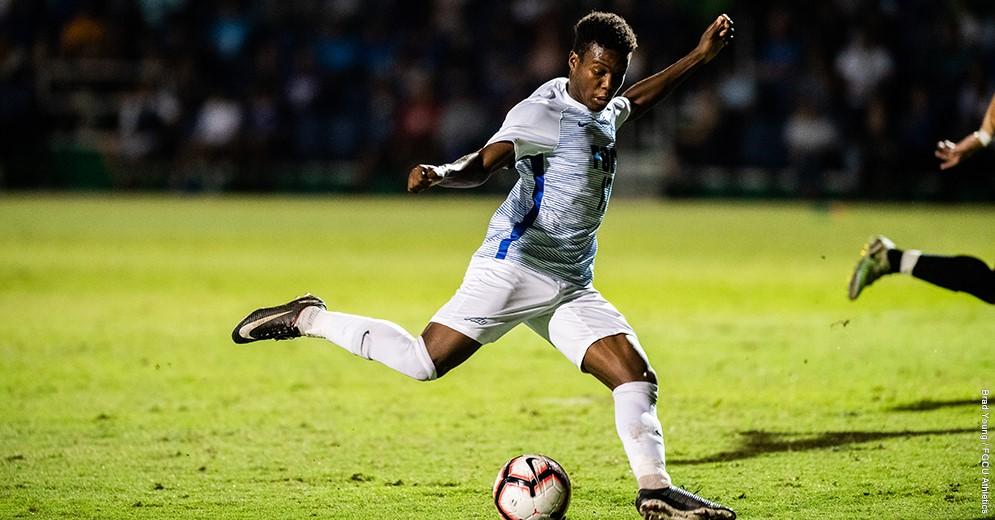 Photo Provided by FGCU Athletics // Shak Adams scored the Eagles' lone goal against UNF as the game would end in a 1-1 tie following double overtime.

The FGCU men’s soccer (3-4-2) team opened their ASUN play on Saturday night against North Florida (2-3-2) as the match ended in a 1-1 tie after going into double overtime.

The game remained in a stalemate until senior Shak Adams was able to a breakthrough in the 28th minute and put a goal in the back of the net for the Green and Blue giving them the early lead.

Unfortunately, the Eagles went down a player in the 60th minute as junior TC Anderson was given a red card and ejected from the game. UNF would take advantage of this opportunity and score in the 71st minute and tie the game up at 1-1.

The Ospreys would continue the pressure as they tacked on another shot in the 76th minute but goalkeeper Gustavo Vasconcelos was able to make a one-hand save and keep the game tied.

The game went into double-overtime and resulted in a tie, as neither times were able to score in either of the 10-minute OT periods.

FGCU recorded 9 shots in all, with Max Edwards and Ivan Rosales both recording two shots each. Vasconcelos put up four saves in the second half to keep the game alive while FGCU was playing with 10 men.

“It was an amazing effort from our guys tonight. Despite the circumstances, we continue to face, the guys were superior in possession, dynamic in attack and fought to win key moments to get the important point on the road,” head coach Jesse Cormier said. “I’m very proud of the team as a whole. We came together at a very important time tonight.”

The Eagles are now 9-1-3 all-time when opening up ASUN conference play.