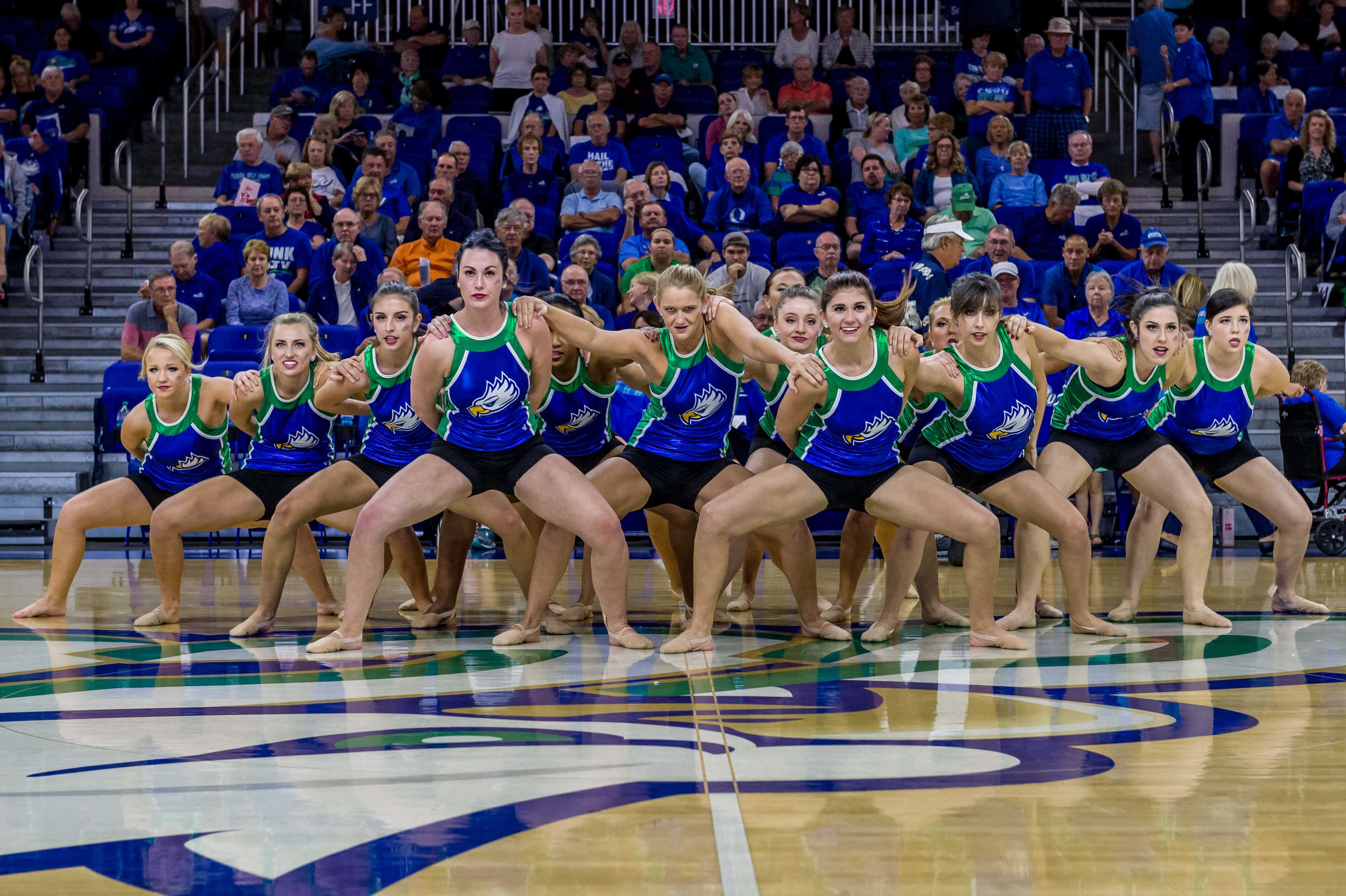 The E’Gals perform during the halftime of a recent home FGCU women’s basketball game. (Photo by Linwood Ferguson)

Over the weekend of Jan. 15 through 18, the FGCU Dancing E’Gals joined college dance teams from all over the country to compete at the UDA Nationals, which was hosted at Disney’s Wide World of Sports in Orlando. After a semester’s worth of practices, the E’Gals had just two minutes to dance and prove that they deserved to place higher than the 21 other Division I teams competing.

“We perform a two-minute dance that we worked on from October to the day we left, Jan. 15,” said freshman Bianca Enriquez. “We practiced over winter break doing six-hour practices to perfect the dance.”

With just a short amount of time to prove their abilities on stage, the girls left everything on the dance floor and seem to have no regrets.

“This year, we danced our absolute best and even increased our dance score from the previous year,” said dancing E’Gal Willow Albergo, a junior at FGCU. “It takes a lot of dedication, hard work and strain on the body to perform on that nationals stage against some of the best teams in the country. I think all 19 E’Gals danced with their hearts on the stage Saturday and represented FGCU well.”

This was the team’s third year competing at this event, and it scored four more points than it did last year when it placed eighth overall. UDA

Nationals is a collegiate national competition where dance teams come to showcase their best dance routines and their spirit videos that highlight their use of signs, pom-poms and overall interaction with the crowd.

“Unfortunately, the competition is based off of a point system where both our dance score and spirit video score count toward the overall placement of the teams,” senior E’Gal Stephanie Smith said.

The video has a section dedicated to spirit-raising techniques where each team is asked to showcase three different ways that the team raises spirit during games. The E’Gals’ spirit video had one video dedicated to their three spirit elements. However, officials at the competition said they needed three separate videos highlighting each spirit element as opposed to the one video they submitted that highlighted all three.

“The rules have not changed in the past four years, and neither has the way we do our videos,” Smith said. “But, for some reason, this year they took off points on the way we did it. We attempted to send in a new video, as we have multiple showcasing all of these. And, we even explained to the officials that their directions were not clear, but they would not accept the new video.”

This ruling resulted in the E’Gals being dropped from 10th place, which would have qualified them for finals on Jan. 18. Regardless of the harsh ruling, the E’Gals left Orlando determined to see this situation in a positive light, knowing they performed their best on stage and were able to grow together even more as a family.

“As a team, we put our heart and soul into this competition,” Smith said. “We practiced day and night for months and months to perfect a two- minute dance. This past weekend, it was clear to see that every girl put their all into this dance and this team, as it turned out absolutely stunning. It will be a moment I will remember for the rest of my life. Regardless of a bad situation, the team remains enthused about the performance and the overall experience we gained.”