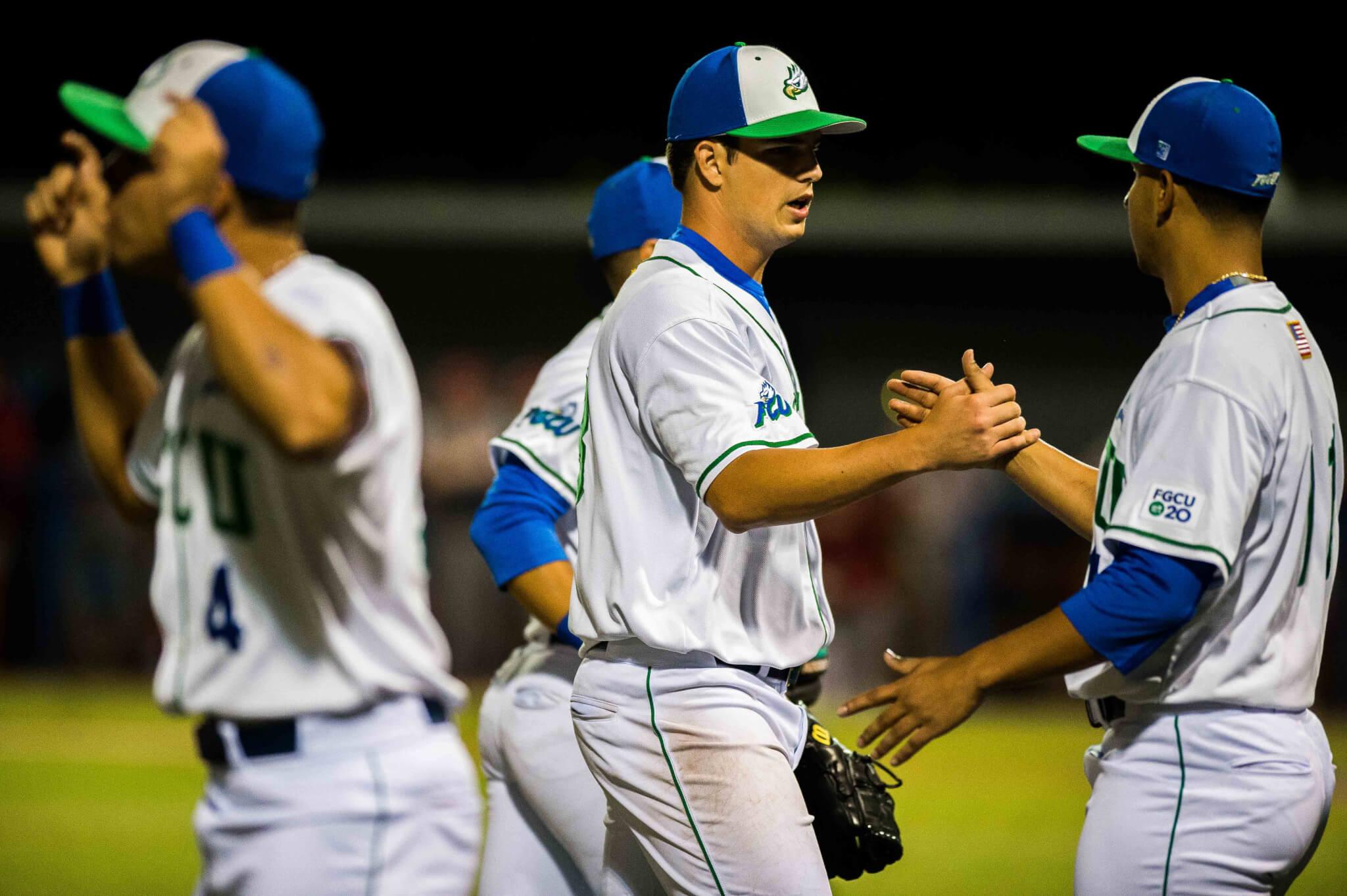 Playing in a doubleheader against Sacred Heart, the FGCU baseball team rebounded from its opening-day loss with a 13-8 victory in game one, and a 9-3 victory in game two.

Now ahead 2-1 in their four-game series against the Pioneers, the Eagles scored a combined 22 runs to earn their first and second victories of the season.

In game one, the Eagles were down 6-0 through four innings, but the Eagles managed to come from behind and win on a two three run home runs by Julio Gonzalez and Richie Garcia to erase a six-run deficit and help the Eagles pick up the win.

“What a difference 24 hours make,” FGCU head coach Dave Tollett said. “Game one was really big, to come from behind down 6-0 to comeback and win. I think that win will go a long way for us. It’s something we can build on, and it gave us a lot of momentum.”

Peyton Gray made his first start for the Eagles, and pitched into the fourth inning allowing six runs (five earned) before handing the ball over to Sterling Koerner. Koerner finished the rest of the game up going five and two thirds allowing only two runs to pick up the win.

Left hander, John Sostarich went up against the Eagles lineup and went four innings allowing two runs and issuing seven walks. Kevin Czapelscki, who came in relief for the Pioneers, picked up the loss, allowing seven runs in just an inning and a third.

The Pioneers jumped out to an early lead on an RBI single by Kevin Czalepski in the third and then than added five more in the fourth inning to go ahead 6-0.

The Eagles, though, would get on the board in the bottom half of the fifth on an RBI single by Eli Lovell. They plated a second run on a groundout and were down 6-2 after five.

“Everyone in the dugout was all hyped and all up, and we were just looking for a spark,” Garcia said. “My first at bat didn’t go as well as planned so the guys in the dugout told me to calm down and took that into my approach.”

Koerner continued to pitch well and the Eagles were able to add some insurance on RBI hits from Marc Coffers, Eli Lovell, and Matt Reardon to take a 13- 7 lead.

The Pioneers would get one back in the ninth, but it would not be enough as Koerner closed out the game and the Eagles moved to 1-1 on the season.

In game two, Josh Dye started for the Eagles, making his first start since 2015. He was opposed by hard-throwing right-hander Baylor Sundahl for Sacred Heart.

The Eagles took this game 9-1 and were able to capitalize on seven unearned runs in the second inning.

Dye went three innings in his first start back from Tommy John surgery, retiring all nine batters he faced with four strikeouts.

Kenton Herring came in relief and pitched five innings, allowing just one run in relief to get the win.

“We came out and put seven on them in the second i game and pitched really well.” Tollett said.

The Eagles had runners on first and third and got on the board courtesy of a safety squeeze by Gonzalez.

The Eagles were only getting started as Spencer Levine plated one with a sacrifice fly to deep center.

After Reardon was hit by a pitch, Coffers drove in two with a double and then Nick Rivera drove in the fifth run of the inning on an infield single.

Eli Lovell capped off a seven-run inning with a two-run double, scoring Coffers and Rivera all the way from first base.

The Eagles retired the first 17 batters until Anthony Capozziello reached on an infield single.

After the next batter reached on an error, Herring got Alex Perry swinging to get out of trouble.

The Pioneers finally got on the board in the eight as Elijah Brown led off the eight with a single and eventually scored on an RBI hit from Anthony Capozziello to cut the Eagle lead to 7-1.

The Eagles got two more in the eighth as Levine hit a rocket that the center fielder Alex Perry couldn’t get as the Eagles went up 9-1.

Matt Rumf closed out the game in his Eagles debut giving up two runs, but also picking up his first and second collegiate strikeout in the Eagles’ 9-3 win.

After missing most of last season with an injury, senior Nick Rivera continued his hot start to the year. He was on base five times in the two games as the designated hitter.

“There were times where I doubted myself and when I was going through the three surgeries I had,” said redshirt senior Nick Rivera. “I’m just blessed to be out here. I’m thankful for my coaches and teammates for believing in me and my strength and conditioning staff and getting me ready, but it’s been a crazy process and I am just happy to be back out there.”

The Eagles will look to win the series on Sunday at 1:00 p.m. when Kutter Crawford takes the mound to make his debut for the Eagles.