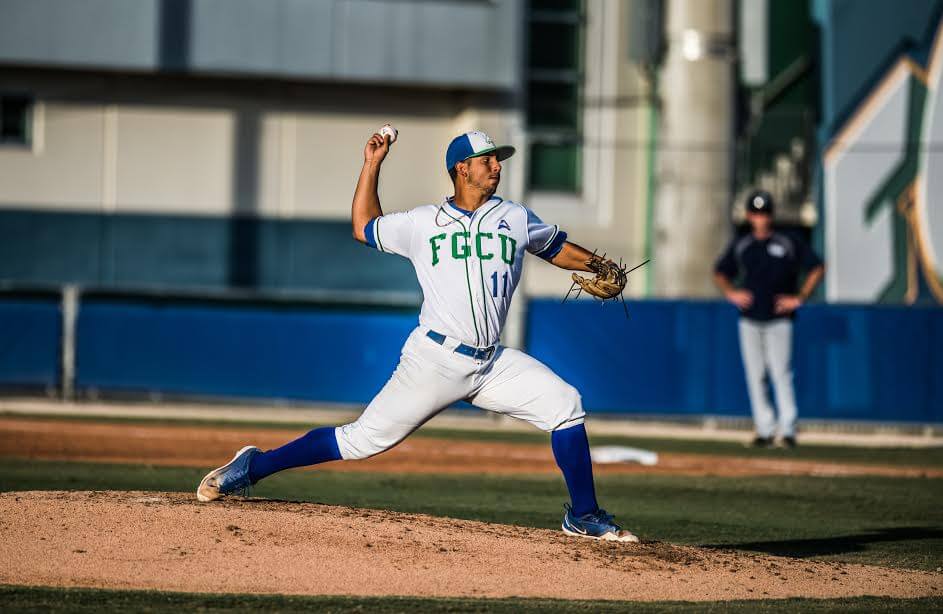 PHOTO BY BRAD YOUNG // Mario Leon pitches in a game against UNF in 2018. Leon was awarded the Winners for Life Award on July 13.

Leon was one of eight players to receive the award for best demonstrating the conference’s core values: education, honesty, student-athlete experience, fairness, health, ambition, respect, diversity, inclusion, leadership, responsibility and sportsmanship. Prospective student-athletes must have competed in the current academic year in an ASUN sponsored sport and be in good academic standing at his/her university. One student-athlete from each of the eight schools in the ASUN conference received the Winners for Life award.

Leon was also recently featured as a part of ASUN’s Beam Video Series — a series that highlights student-athletes in the ASUN conference who have made an impact in the classroom or the community.

In the ASUN conference, Leon is no stranger to awards. He made FGCU baseball history when he was the department’s first student-athlete to ever receive the ASUN Scholar-Athlete of the year award and was chosen to represent the ASUN at the 2017 NCAA Student-Athlete Leadership Forum. Leon was one of 300 student-athletes selected from across the nation to attend the forum, where he and others strengthened leadership skills to be used on and off the field.

At FGCU, Leon was awarded the Eagle Scholar-Athlete award in 2017-18 and earned the Athletic Director Honor Roll selection during every one of his undergraduate semesters. He was also a student-athlete luncheon honoree four times as well as the FGCU Athletics Scholar-Athlete of the month twice.

Among his other accomplishments, Leon finished his career in seven different top 10 categories. Some of these categories include fifth in strikeouts (225), sixth in innings pitched (242.2) and second with five combined shutouts.

Leon will continue his baseball career with the Arizona Diamondbacks organization after he was drafted recently in the 23rd round of the 2018 MLB Draft as the 699th overall pick.