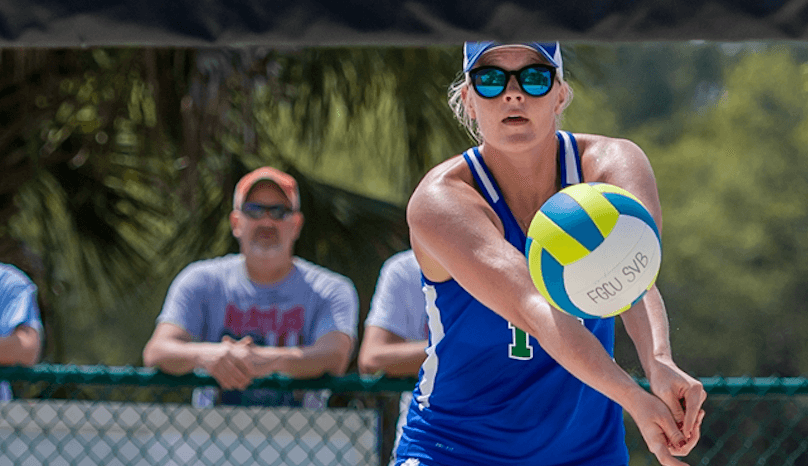 The FGCU beach volleyball team traveled to Deland to compete in its first ASUN doubleheader against Coastal Carolina and Mercer this weekend.

The Eagles took both matches from Coastal Carolina but suffered two losses against Mercer.

Despite tough wind conditions on day one, FGCU claimed a 3-2 victory over the Chanticleers with wins from No. 2, 3 and 5, but suffered from a 3-2 loss to Mercer.

“Conditions were tough this afternoon with some pretty heavy winds throughout the day,” head coach Matt Botsford said. “I didn’t think our ball handling was as sharp as it needed to be and ultimately versus Mercer that became a factor. I was, however, very pleased that we stayed competitive and found ways to extend matches. “

However, the senior duo of Madi Wilcox and Leigh Pudwill fell in back-to-back sets by scores of 21-15 and 21-17.

After a forfeit from Coastal Carolina due to an injury, the No. 2 pair of Giovanna Borgiotti and Ashley Glickert took the win.

Despite the close three-set loss at the No. 1 spot, Katie Puisis and Karissa Rhoades secured the Eagles’ victory with a two-set victory at the No. 3 spot.

Play ended on day one with a 2-3 loss to Mercer with wins from pairs two and four.

FGCU split their first pairs with a three-set victory from Pudwill and Wilcox at the No. 4 spot after a two-set loss from Jordan and Werkmeister.

The No. 2 duo of Borgiotti and Glickert fought hard in three sets to take their second win of the day.

However, with the match tied at 2-2, the No. 1 pair of Allen and Carroll fell in three sets, ultimately ending in the Eagles defeat.

On day two of play, FGCU swept Coastal Carolina 5-0 with four of the five wins coming in two sets before dropping a 3-2 result to Mercer.

“I thought today we played a much cleaner brand of volleyball, and that showed in our early match with Coastal,” head coach Matt Botsford said.

No. 4 Caroline Jordan and Halie Wekmeister won due to an injury forfeit, while at the No. 5 spot, Madi Wilcox and Leigh Pudwill won back-to-back sets by scores of 21-16 and 21-14.

Katie Puisis and Karissa Rhoades sealed the victory for the Eagles after winning in two sets at the No. 3 spot.

This luck ran out for the Eagles going into the second game, as FGCU fell to Mercer 2-3 with the only wins coming from pairs three and four.

FGCU split their first pairs with a three-set victory from Pudwill and Wilcox after a two-set loss from Jordan and Werkmeister.

Rhoades and Puisis tied the match at 2-2 after a two-set victory, but the No. 1 pair of Carroll and Allen fell in two sets, ending the match for FGCU.

Next, the Eagles will host Stetson in a doubleheader Tuesday, April 12 beginning at 4 p.m. with the second game followed immediately after.