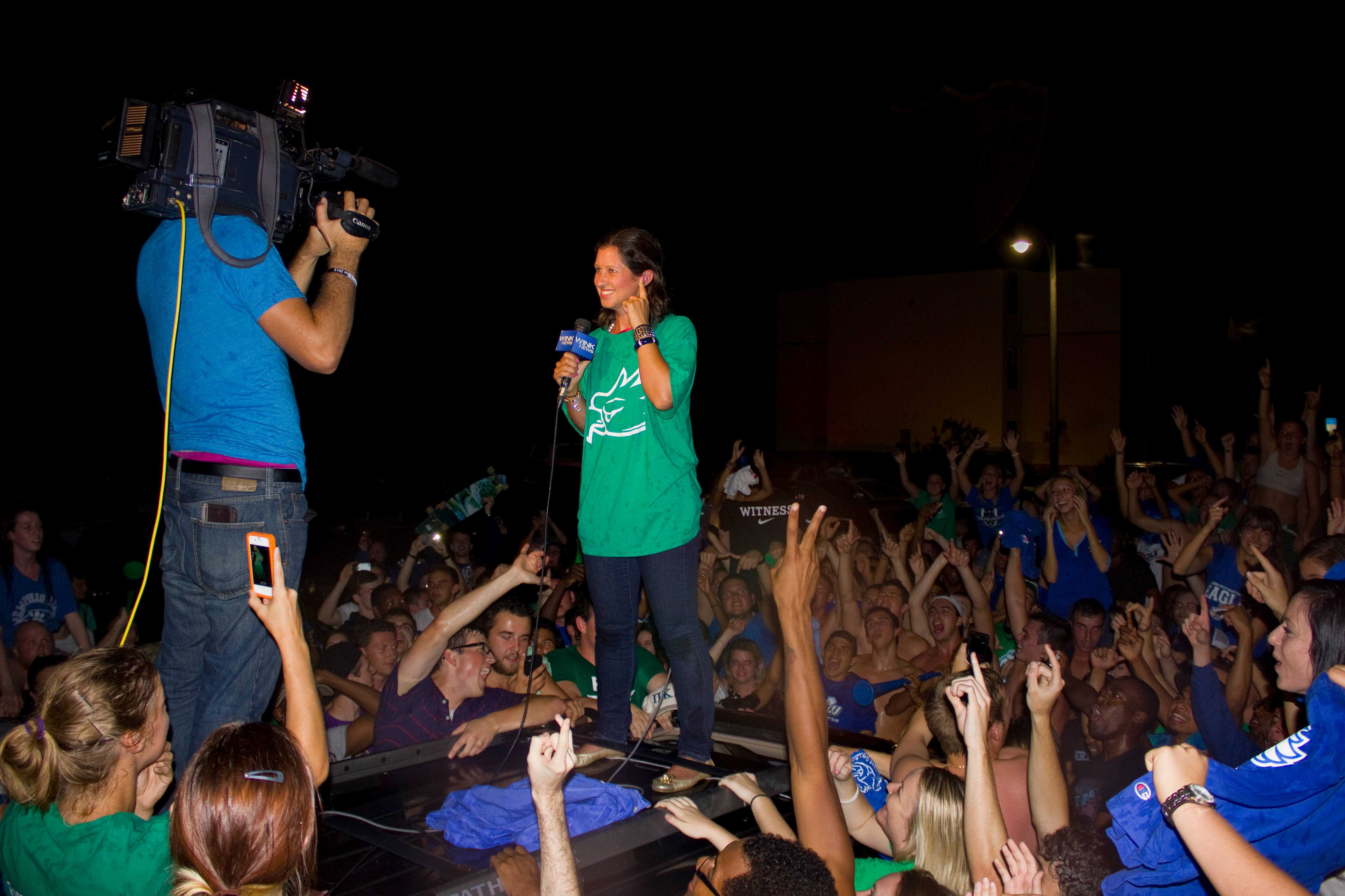 There has never been a better time to be a Florida Gulf Coast University Eagle.

FGCU destroyed numerous brackets across the nation Friday night as they beat the odds and claimed victory over the No. 2 seed Georgetown in the NCAA.

On Sunday night, they did it again and made history with a victory against the No. 7 seed San Diego State University.

As FGCU became the first No. 15 seed school in NCAA history to make it to the “Sweet 16,” the student body decided it wasn’t about to let this glorious moment pass quietly.

The campus was overrun with swarms of sweaty, screaming students clad in green and blue. All were out in full force to celebrate the school’s triumphant NCAA Cinderella story.

The most frequent word heard Sunday night was “proud.”

FGCU men’s basketball guard Jamail Jones, who is a red shirt this semester, beamed with joy among his classmates Sunday night.

Jones appeared to be anything but disappointed about staying behind as he watched his team work its way past SDSU.

“Before they left, I tried to be a leader even though I’m not playing,” Jones said. “I try to give them words of wisdom. I told them, ‘Look, we can actually do this. We have a shot at this.”

Jones told Eagle News he has not spoken to his teammates yet, but he is eager to greet them when they return home.

While Jones waits for his teammates to return home, other student athletes came out to show their FGCU school spirit.

Holm said: “This is crazy. This is awesome for our school, recruiting-wise. This is crazy exposure. I’m so proud of them.”

Countless students, all with their own personal ties to the men’s basketball team, joined the student athletes in the elation of the evening.

“I know Sherwood (Brown) personally. We used to skip math class together freshman year,” said senior Garett Faulkender.“It was an honor, and we’ve been friends ever since. Ever since then I knew he could do it. I knew we could win together as a school.”

As the crowd alternated between chanting profanities at the upcoming opponent, University of Florida, and the joyous letters “F-G-C-U,” one student decided it was time to move the crowd to a new location.

“To the beach!” one voice exploded from the crowd.

The crowd echoed the single voice, almost simultaneously, and began to move to the FGCU waterfront.

While the crowd began to relocate in droves, Chief of University Police Steven Moore kept a watchful eye over the students. While he was there to maintain the peace, there was no doubt he, too, was enjoying the celebration.

It’s good for the university, everyone is having a great time. It’s fantastic for FGCU,” Moore said.

Moore explained the celebration Sunday night was much greater than Friday night’s victory against Georgetown. He seemed happy to let the students have their elated moment.

“There was a little bit Friday night, but not to this extent,” Moore said. “Everyone’s being good and this is fine.”

By 11:30 p.m., the band of students had worn itself out, and the crowd began to disperse. However, the glow of the evening will span well into the coming days of the NCAA March Madness.

The win is something very personal to the students of FGCU.

“This is probably one of the coolest things in school history,” FGCU student Ben Ruah said. “It was that miracle magic that we had.”