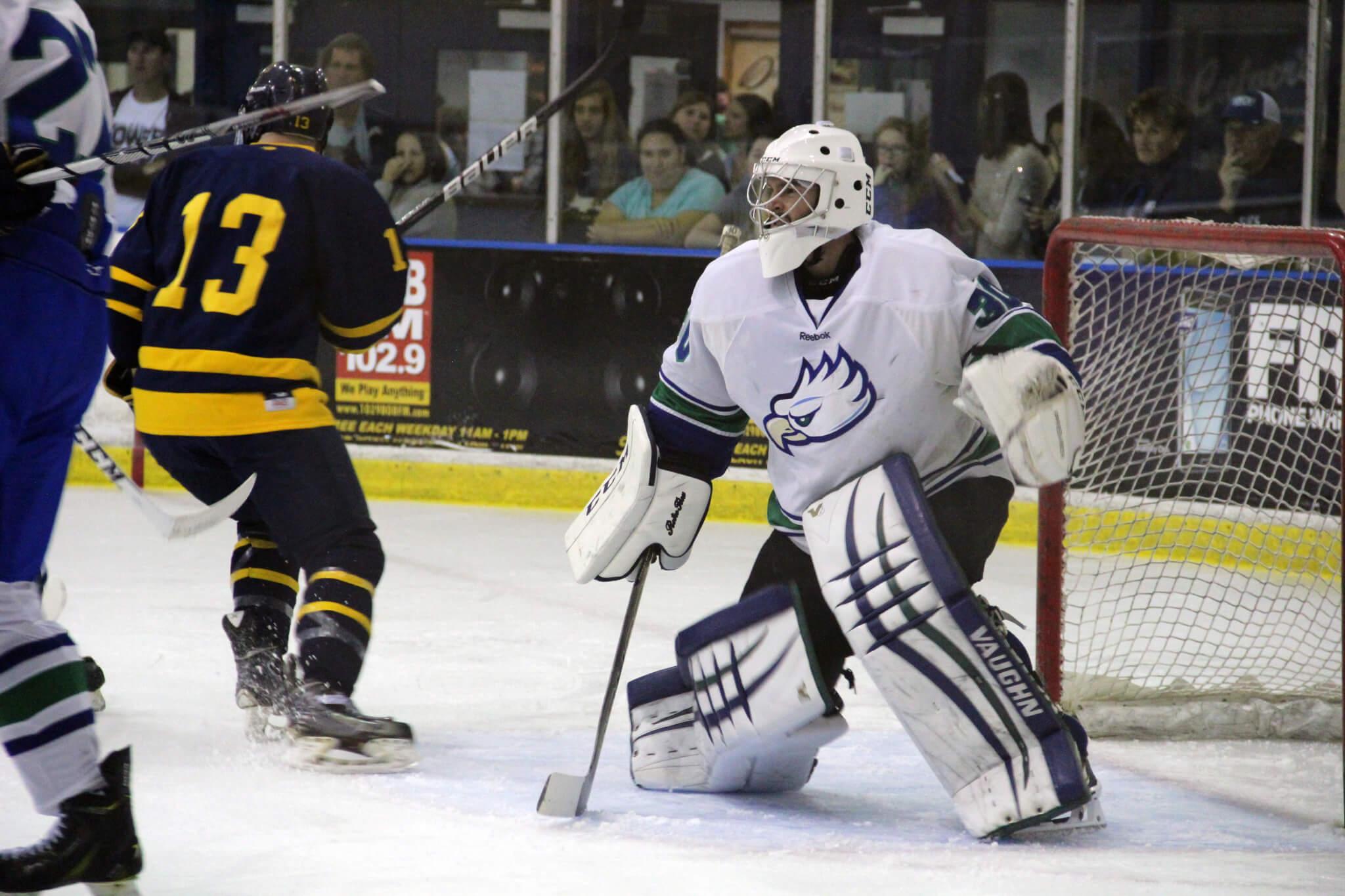 The FGCU DII men’s hockey team extended its win streak to four with a 9-1 win over Holy Cross in front of a packed house Saturday night.

This was a special night for the Eagles in numerous ways; it was the second game of Eagle Family Weekend as well as the ACHA National Championship ring ceremony. Eleven players on the current roster accepted their rings prior to the game.

FGCU’s goaltender picked up his second win of the season, saving 21 of 22 shots. While Holy Cross netminder William Huntress collected a loss while being peppered with a total of 53 shots.

The Eagles got into penalty trouble at 17:11 of the first period, and the Crusaders capitalized on the power play, scoring immediately off the offensive zone faceoff.

It was all FGCU from there on out though.

A huge hit center ice sent a Holy Cross player airborne and energized the crowd. The Eagles drew off this energy, scoring their first of the game at 8:59 when assistant captain Michael Chemello got a cross-crease pass from Matt Salera and wristed it top shelf past Huntress.

The Eagles tallied another goal on a power play at 4:54 when Josh Koerner sent the puck off the glass behind the net to Nathan Pelligra in front, who chipped the puck over a down Huntress.

FGCU wasn’t done yet, scoring with 45 seconds left in the period when Selara hit Jacob Leonard with a perfect pass to the point as he entered the zone. Leonard beamed it into the back of the net, making it 3-1 headed into the first intermission.

The Eagles came out of the intermission with a speedy goal seven seconds into the period, as Chemello won the face off, passing to Jordan Klotz, who sped into the zone and knocked another back to make the Eagles’ lead 5-1.

Immediately after killing off a penalty, the Eagles got on the board again thanks to David Wong at 15:21.

It was a great night for the Eagles’ special teams, as they tallied another goal, shorthanded, when a Holy Cross defender couldn’t hold the pass at the point and sent the Eagles the other way to score on a deflected shot that went up and over Huntress’ head and plopped into the net.

No goal was better on the night than David Wong’s — who showcased his speed and insane dangles — as he went through a Crusader defenseman’s legs, turning him inside out, and freezing Huntress as Wong buried his second of the night.

That would do it for the period, as the Eagles took a dominating 7-1 lead into the second intermission.

The third period was no different for the Eagles, as they would put up two more goals and spend the majority of the period on the Crusaders’ end of the ice.

At 12:29 of the period, Pelligra made the score 8-1 with a nice backhand shot from in-between the faceoff circles.

Wong found the net again to collect his hat trick with 5:52 remaining, capping off the scoring at 9-1.

Things got physical toward the end, as a Holy Cross player made a late hit on an Eagles player after the whistle. The refs contained the scrap, and time ran out, giving the Eagles their fourth win of the season.

The Eagles head into next weekend with a cross-division series against DI SUNY Cortland in the Red Dragons’ first game of the season.