FGCU DII hockey picks up right where it left off 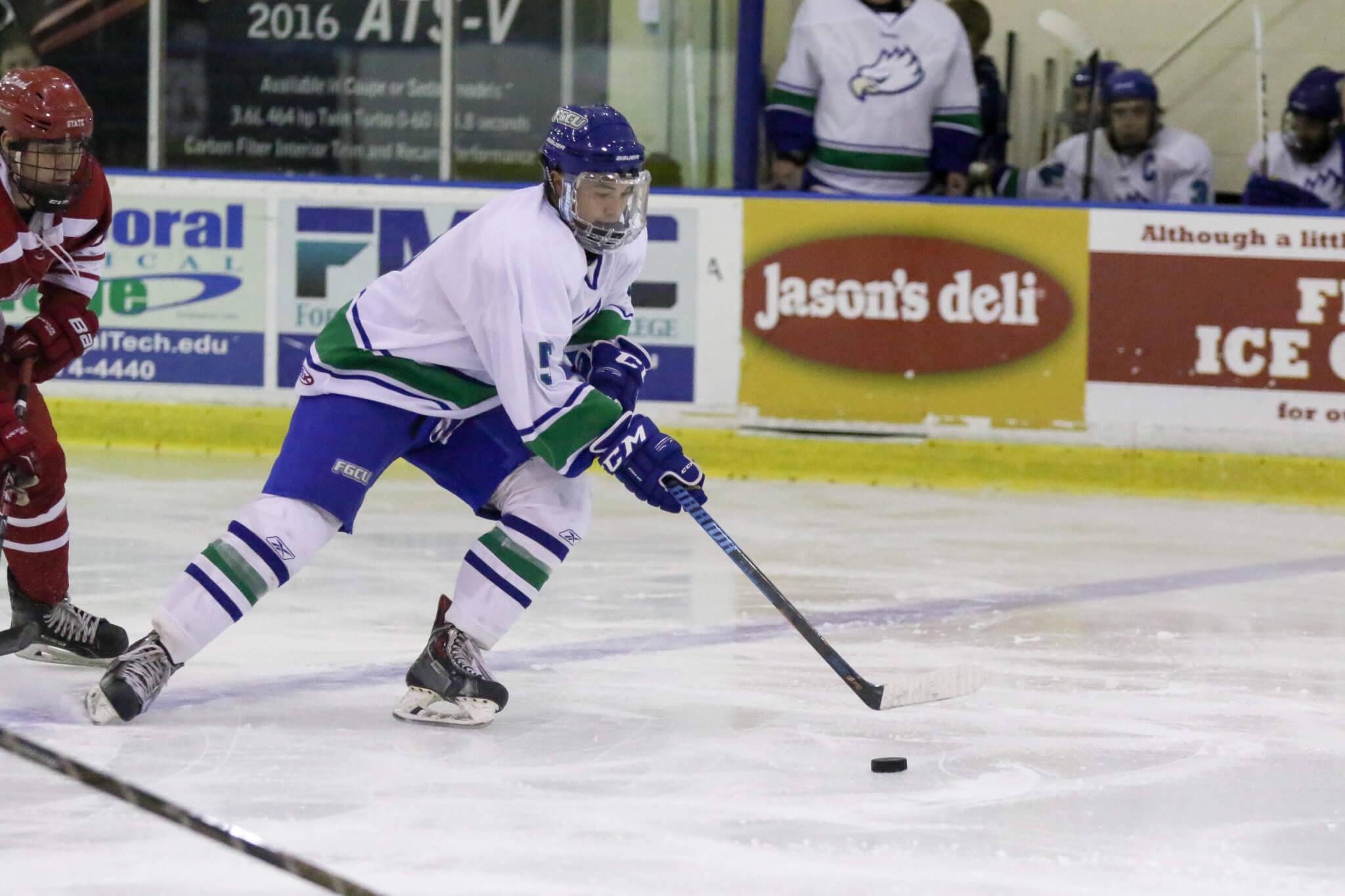 The FGCU DII men’s hockey team took on the University of St. Thomas on Friday night, picking up their 12th win on the season in a 6-2 victory.  Tyler Tracy added another win to his total, saving 17 of 19 shots. Josh Koerner and Jordan Klotz continued their hot streaks — both tallying two goals on the night. The first period was a back-and-forth one, with both teams getting a number of chances. Tracy came up with three big saves in the first 10 minutes to keep the game scoreless.  The Eagles got on the board with 5:55 left in the period when Jordan Klotz took his own rebound to the back of the net. Neither team was able to get on the board again, and the Eagles took a 1-0 lead to the first intermission.  The Eagles got a chance early into the second, but the Tommies’ goalie sprawled across to come up with a huge save. Soon after, at 15:17, Logan Garst hit a breakaway pass to Koerner, who sped in, opened up the UST goalie and buried it.  Koerner’s speed has continued to hinder opponents as the season has progressed, as the majority of his scoring has come from bolting by opposing teams’ defenseman.  The Eagles added another goal when Trevor Mullaly decked through and windmilled past two UST defenders then dropped it to Brett Yochum that put it by the UST goalie, who was caught off guard by the play.  The Tommies finally got on the board at 9:17 when they snuck one by Tracy. But, the Eagles were unfazed, as they scored right back when Klotz poked in his second of the night. The Eagles took a comfortable 4-1 lead into the second intermission of play. Starting the period with 48 seconds left on the power play, the Eagles looked to carry their momentum, but UST was able to kill off the remainder of the penalty. An Eagle headed to the box for the first time on the night at 10:07. But, yet again, Josh Koerner’s speed proved deadly, as he sped past a falling UST defender and past the goalie who was unable to get over in time, giving Koerner a short-handed goal and the Eagles a 5-1 lead. UST squeezed one more goal through Tracy’s five-hole with 6:01 remaining. But, time was an enemy, as they were still down three.  Logan Garst decided the Eagles weren’t done scoring on the night at 3:30 when he went coast to coast on UST, ending his trip with a top shelf ripper and sealing the victory at 6-2. The Eagles take on the Tommies again at 8:30 p.m. Saturday at Germain Arena for their last game of the semester.