FGCU DII hockey senior has goals on and off the ice 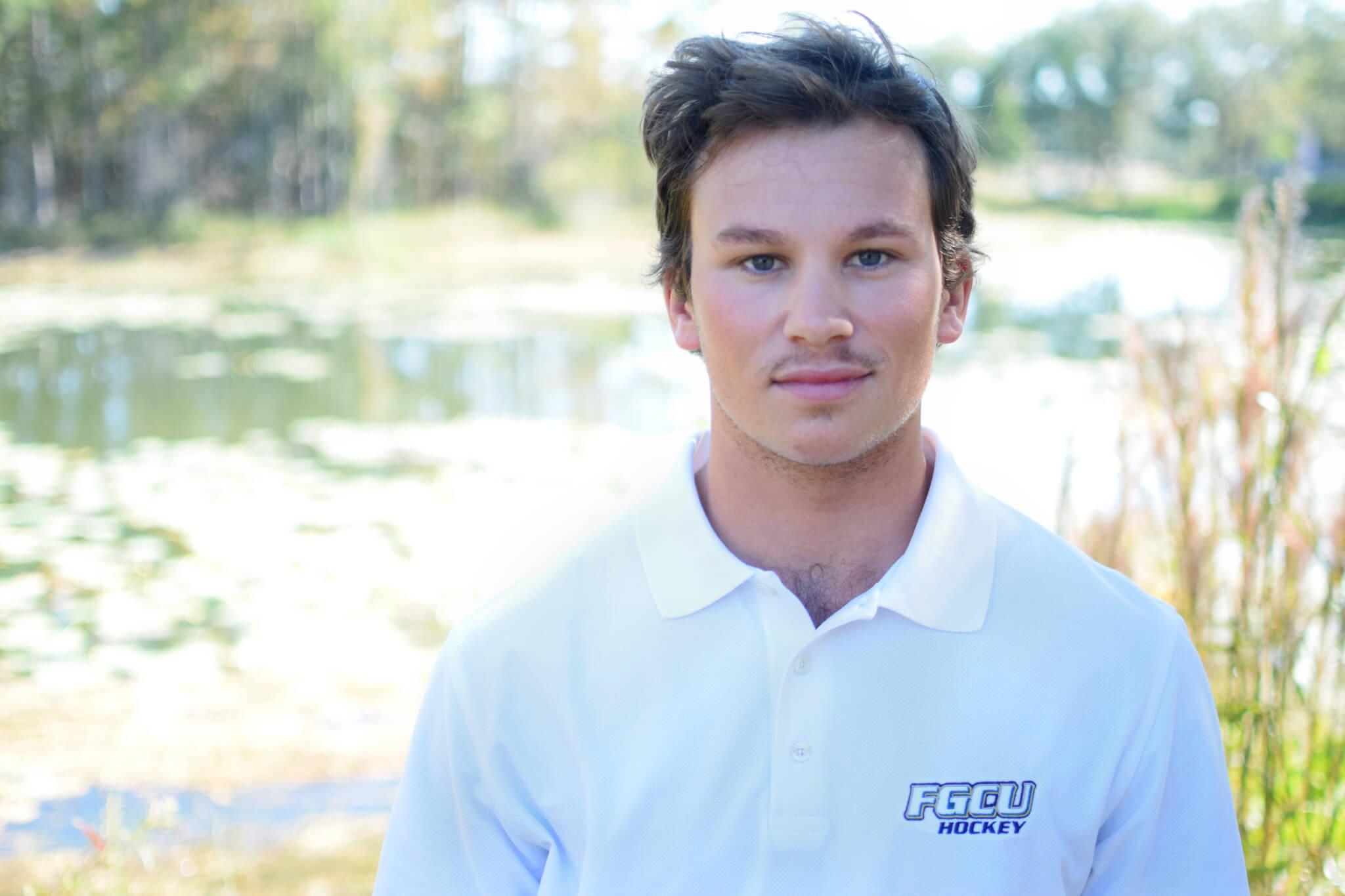 Nathan Pelligra was standing on the sidelines of a grassy field when he realized he didn’t want to be there. His lacrosse coach was chastising him for taking a swing at an opposing player after the guy kept hitting him in the head with his stick.

“He goes, ‘What are you doing? This isn’t hockey!’ And, I kind of took a look around and realized, like, ‘Yeah, you’re right, so why am I playing this?’” Nathan said.

Nathan Pelligra skates in the FGCU DII men’s hockey home opener against Merrimack College. He assisted on the first goal of the night – and season – in the 7-1 victory. (EN Photo / Rachel Iacovone)

He went on to play for the Buffalo Junior Sabres in their 2012-13 season, which saw them named the Ontario Junior Hockey League’s West Division champions and the top seed in the Southwest Conference for the 2013 playoffs.

After transferring in from SUNY Brockport his junior year, Nathan is now ranked fifth in points for the reigning national champion FGCU DII men’s hockey team with eight goals and 24 points on the season. The team is undefeated, so far this campaign, with an average gap of five goals between it and its opposition by the final.

Growing up, Nathan tried other sports — every sport, he said, besides basketball — but it always came back to hockey.

“I tried playing all the other sports, but in hockey, you’ve got a little bit of everything,” Nathan said. “You’ve got the skill, the finesse, the grit.”

That was no surprise to anyone who knew the Pelligra family and even less of a surprise to his parents, who raised two hockey players before him.

“First time I put him on the ice, he just took off,” his father, Bill Pelligra, said.

Nathan said this first time was when he was 2 years old though Bill laughingly corrected that it was probably closer to the age of 5.

“At first, he was a little wild in his stride,” Bill said, “but you could already tell he was going to be on the ice like his brothers.”

The eldest, Mark Pelligra, is now in his 30s. Though he’s married with kids, he still makes time to referee games.

The middle brother, Alex Pelligra, is still very active in the sport as well, continuing to play in men’s leagues post-graduation.

“I think Nate has the most talent of the boys,” Bill said.

Nathan’s mother, Debbie Pelligra, interjected, laughing, to ask her husband to please not say that on the record.

“I think the other boys know that,” Bill continued. “They’re fine with that. They’ve always been competitive but in a brotherly way. They know.”

Nathan grew up in Rochester, New York, where his parents still reside. Though he said the freezing temperatures and proximity to Canada surely played a part, his love of hockey also comes from his parents.

Bill said he grew up loving the sport but playing the street variety mainly, as he said ice hockey was “more of a suburban sport” in the ‘60s.

“It wasn’t until I got to high school that I started skating,” Bill said. “Nowadays, you’d be considered behind the eight ball if you started skating at 13 or 14.”

Like his two eldest sons, Bill continued playing after graduating — in a men’s league for 12 years — before going on to coach his sons’ teams from the time they were 6 to 13.

Nathan’s mother came into their marriage with a similar love of the sport. She played field hockey growing up and went to all the local ice hockey games.

“I attribute hockey to helping us raise our children,” Debbie said. “It made them good boys and great men.”

Nathan poses for one of his first hockey shoots.(Photo courtesy of Debbie Pelligra)

As an example of their son’s good character, Debbie mentioned that Nathan is flying home Thursday for winter break and will be immediately driving from Greater Rochester International Airport to Buffalo to help out a friend whose father has taken ill.

“Me and Nate — we both think the same way hockey-wise, so it was easy to become friends,” Chemello said. “We both try to work when we can even outside of practices.”

The two see each other four times a week between the two practices and two games Nathan attends on top of his full-time course load and job at Bonita Beach.

“Winning a championship together makes you tighter,” Chemello said. “We’ve got a lot of new players, and you know, you kind of stick with the guys you’ve been with the longest.”

Because of that bond, Chemello was the one to sit Nathan down and tell him to take a break now following his injury.

After blocking a shot sideways and taking a puck to the side of his skate in the home opener, Nathan has been battling a foot injury all season — finally agreeing to use the slower part of the season to sit out the last four games.

With six weeks of rest thanks to the upcoming holiday break, head coach Bob Brinkworth hopes to see Nathan back on the ice and at 100 percent again soon.

“It didn’t take very long to see he’d be an important part of the team,” Brinkworth said. “He played a higher level of hockey than a lot of people that come in here.”

Nathan, who anticipates on graduating in spring, is currently looking to play professionally, either in the states or abroad in Europe. No matter where he ends up, Nathan said his teammates are the best part of the sport.

“My favorite part of being on the ice is probably being with the guys — joking around a lot, running into each other a little bit to let all the stress out,” Nathan said. “It’s fun. Everyone enjoys each other’s company.”