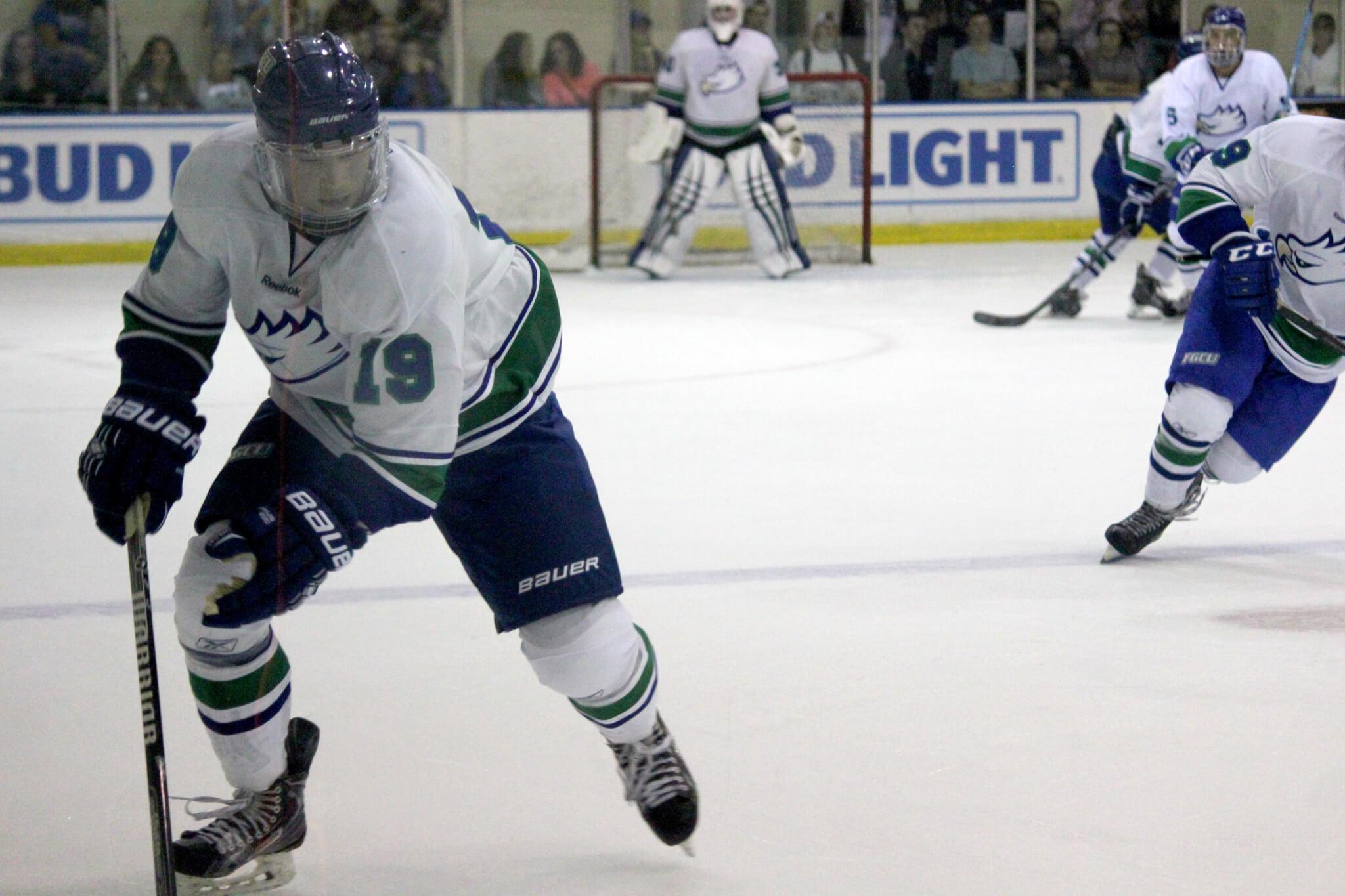 No. 19 Nathan Pelligra scored two of the Eagles' 13 goals Friday night in their first game of a two-game series against Holy Cross this weekend. EN Photo / Rachel Iacovone

The FGCU DII men’s hockey team put on an offensive clinic against Holy Cross in its third game of the season, taking a 13-1 victory.

Michael Chemello put up a goal and five assists in a six-point night, while Josh Koerner netted a hat trick and registered two assists. The Eagles’ goaltender, Tyler Tracy, picked up his second win of the season, allowing one goal on 13 shots.

The Eagles wasted no time running up the score, as they took a commanding seven-goal lead in the first period. FGCU was constantly attacking through the first 10 minutes, never out of the Crusaders’ end for long before entering again.

Forward Jordan Klotz opened up scoring at 10:46, sliding the puck past a sprawling Holy Cross goalie, William Huntress, on a tic-tac-toe passing play with Michael Chemello and Eduardo Leon. Not even two minutes later, David Wong scored off a faceoff win from Trevor Mullaly, making the Eagles lead 2-0.

Chemello extended the lead to 3-0 with a power play snipe on Huntress’ blocker side. Forty-one seconds later, Nathan Pelligra scored from the exact same spot and shot the same corner, making the Eagles lead 4-0.

With 5:30 left in the period, the Crusaders got their first shot on net in an odd fashion — a penalty shot. But, Tyler Tracy shut the door on the penalty shot to preserve the four-goal lead.

The Eagles added three more goals from Steven Cariglio, Steve Noyes and Brett Yochum before the intermission, scoring the same amount of goals they scored total in their last game — seven. The Eagles dominated the shots with a 17-to-3 shot advantage headed into the intermission.

Holy Cross made a goaltending change to start the second period, giving Beau Collins the net for the rest of the night.

The Eagles didn’t seem to mind too much, as they continued their offensive demolition, burying four more goals. Though, FGCU did surrender its first and only goal of the game 2:06 into the period on a shot that just snuck by Tracy. That goal was soon answered by Koerner, who tallied a goal less than a minute later.

Koerner wasn’t finished, as he added two more goals to his total in the next 5:11, giving him a natural hat trick. Pelligra tallied another goal before the Eagles headed to intermission with a commanding 11-1 lead.

The Eagles were not done scoring yet, as they added two more goals in the third. The two goals came early in the period, and then, the Eagles sat back and played steady defensive hockey.

Midway through the period, defenseman Drake Stimpson added to the excitement when he sent a Holy Cross forward clean up-and over into the Eagles bench.

As the game winded down, it became a bit chippy with both teams taking shots at each other, as emotions ran high. The final shots on goal had the Eagles taking 51 shots and Holy Cross taking 13. When the final horn sounded, FGCU took game one of the two-game series 13-1.

The Eagles are back in action again against the Crusaders at 8:30 p.m. Saturday for the second game of Eagle Family Weekend where the team will accept its ACHA DII National Championship rings.