FGCU extends win streak to ten with win over ACU 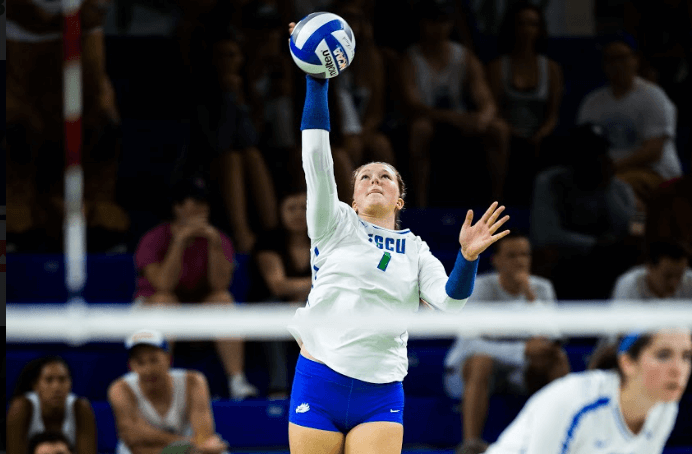 In the late afternoon on Sunday, FGCU claimed their fourth victory of the tournament against Abilene Christian University, making it FGCU’s tenth straight win.

Going into set one, FGCU showed up, dominating the set by taking the lead right away, 8-2. FGCU continued to score consecutive points, forcing the Wildcats to take a timeout, while increasing the score gap between the teams.

ACU tried to make a comeback toward the end of the match, but FGCU fought back with a big block from Marlene Moeller and Amanda Carroll, MVP of the Owls Classic, to end the first set in FGCU’s favor, 25-14.

The momentum from FGCU continued into the second set as FGCU continued their advancement into the lead. They leaped ahead to 23-14, creating a score gap that would make it difficult for ACU to catch up.

Only two points away from set point, ACU worked on a comeback, but fell short when Carroll got ahold of another kill for the Eagles, 25-17. FGCU now had two sets on their way to match win.

“Another quality match in terms of blocking and floor defense,” said Botsford. “I’m very pleased with the progress we’ve made there in the past few days. Tonight we got sloppy on the offensive end, but we picked it up in other areas which was good to see. Giovanna was excellent in her first career start, and as the match went on, you could see her comfort level improve.”

Errors from the Eagles started the third set off differently than the first two.

After being tied at 10-all, ACU started to take the lead, capitalizing off of FGCU’s service error. FGCU followed, in pursuit of wining the lead back. But after reaching the 20s, ACU still held a three-point lead, 23-20. Powerful back-to-back kills from ACU ended set three in favor of the Wildcats, 25-20.

ACU was working its way to catch up to FGCU’s lead in the match, 2-1.

The fourth set began with a competitive spark from both sides. When FGCU reached 13-7, they finally broke away from the closeness in score with the Wildcats and scored the next six points. ACU worked to make a comeback, only to be shut down Pudwill, who contributed the winning kill to end the fourth set for FGCU.

The end score was 25-16 and made FGCU the Owls Classic Tournament Champions.