FGCU goes 1-2 during the home-opening weekend 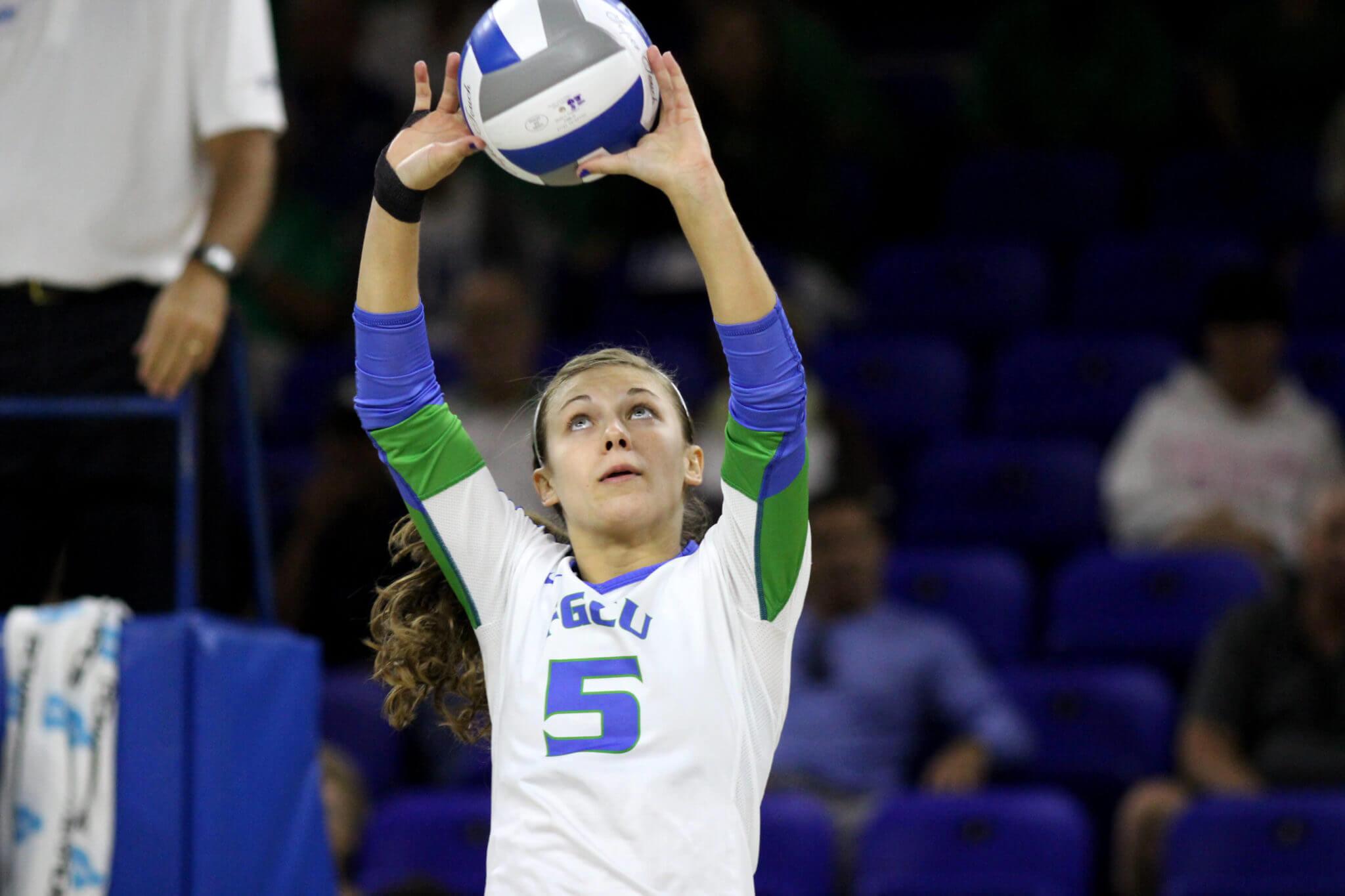 The Eagles will begin the Atlantic Sun schedule at home against Stetson at  7 p.m. Saturday, Sept. 27.

For the first time in the 2014 season, the Florida Gulf Coast University Volleyball team got the chance to play at home inside Alico Arena. This past weekend, the Eagles took part in the Hilton Garden Inn and Homewood Suites Volleyball Classic, facing Alabama State, Florida Atlantic and Missouri-Kansas City.

This weekend also marked the home debut for FGCU’s new head coach, Matt Botsford. Botsford was most recently the top assistant coach at Colorado State University from May 2012 to February 2014 before arriving at FGCU.

He is looking forward to creating a legacy and winning a few games with FGCU. “A few more wins like that and we will be happy,” Botsford said after Friday’s victory over Alabama State.

The weekend results drop the Eagles to 5-7 overall on the season.
Eagles fall to FAU

Ohio State football coach Urban Meyer made a special appearance to see his daughter, Gigi Meyer, play at Alico Arena against Florida Atlantic. Setter Gigi Meyer was honored prior to the game. Since the Buckeyes and Urban Meyer will be at Michigan State on Nov. 8, the night of FGCU’s senior night, FGCU held a ceremony for Gigi Meyer on Saturday night.

“I am very appreciative of all the opportunities she has had. It has been a great run,” Urban Meyer said.

The opening of the match started fast and furious. Both teams were looking to show their dominance early. After 20 points, the set was tied 10-10. The Owls scored the next three points to take a 13-10 lead. The Eagles kept fighting back, eventually tying it up at 20-20. FAU outlasted the Eagles to take set one 25-22.

The Eagles got off to a shaky start in the second set. They quickly found themselves trailing 12-5. They used a 3-0 run to close the deficit to 12-8. The Eagles were still trailing 17-13 when Botsford called a timeout. The Eagles fell behind 2-0 after dropping the second set 25-17. Olivia Mesner and Eleonora Kazarian each had three kills in the set for FGCU. Katarina Stepanovic and Liene Mellupe led the Owls with four kills each in the set.

The Eagles lost a heartbreaking match to UMKC 3-2 to start off Saturday’s doubleheader at Alico Arena.

The Eagles rebounded to win the second set 25-19. This evened the match at 1-1. They continued the momentum winning the third set by the same 25-19 score. It looked as if the Eagles were going to win this match.

The Eagles got off to a good start in the fourth set, jumping ahead to a quick lead. Then, Vanessa Banke was injured midway through the set. During the middle of a play, she collapsed on the floor clutching her left knee. The Eagles were not able to recover and eventually lost the set 27-25. “We did not have anybody step when we needed,” Botsford said.

The Eagles continued to struggle without Banke, eventually losing the fifth and final set 15-10.
Alabama State gets blanked

“I thought we served great. That was our biggest advantage. Producing 12 aces with only seven errors is uncommonly good and I liked how aggressive we were back there,” Botsford said.

After a hard fought first 20 points, the first set was tied at 10-10. Then, the Eagles took control of the set and the match. They won four of the next five points to take a 14-11 lead. The Eagles ultimately won the first set 25-18. Jessica Barnes and Vanessa Benke led the Eagles with three kills in set one.

The second set started much liked the first one. Both teams were able to get off to good starts. After 14 points, the set was tied at 7-7. FGCU then took command of the set. The Eagles used a 6-2 run to take a 13-9 lead. FGCU still led 20-13 when Alabama State took another timeout. The Eagles convincingly won the second set 25-15 and took a 2-0 lead in the match. Olivia Mesner and Jessica Barnes led the Eagles with four kills each in set two.