FGCU heads to the NCAA tournament 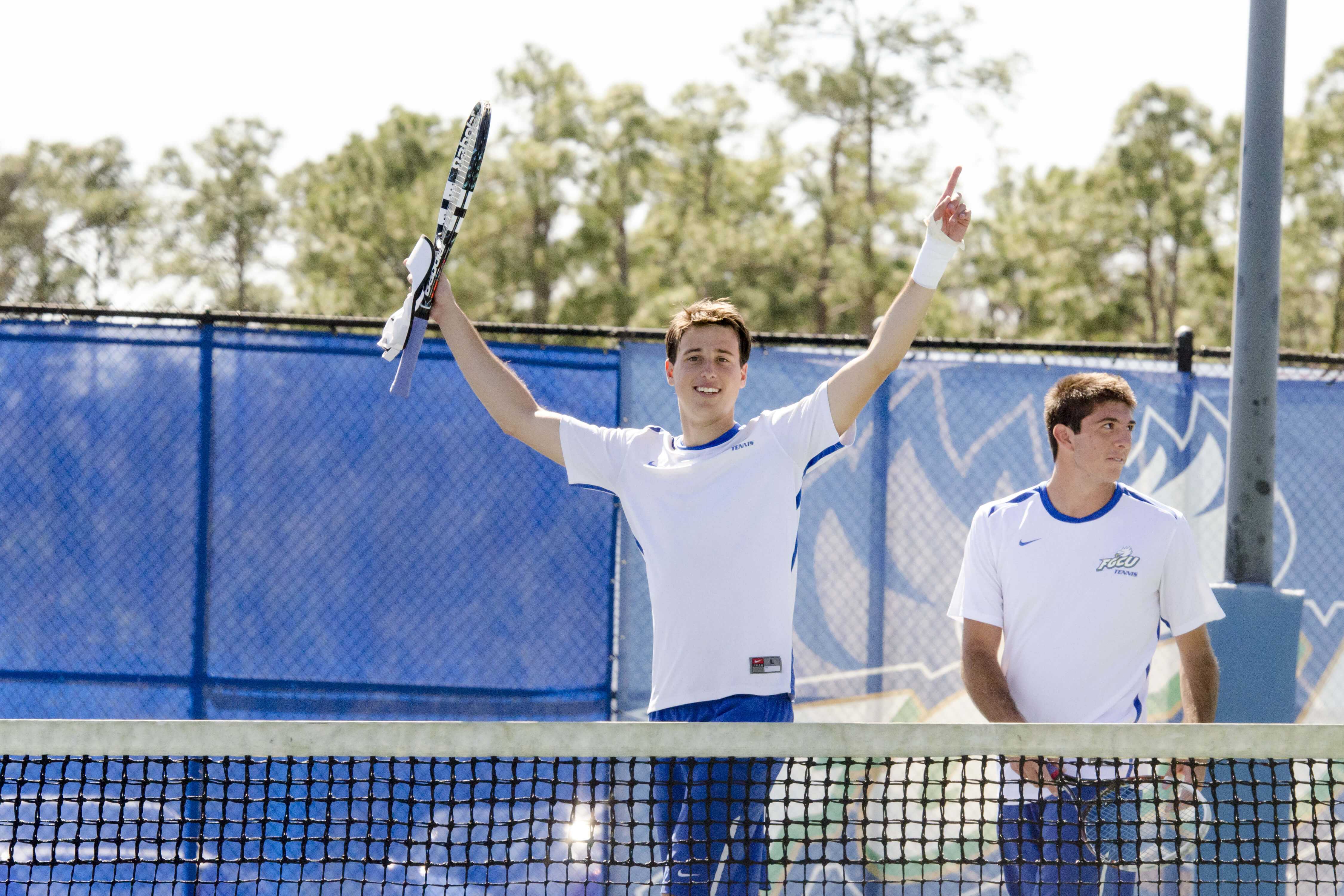 Despite rain delays and fighting nerves, the Florida Gulf Coast University men’s tennis team (17-5) fought its way to victory over the University of North Florida (17-7) on Sunday to win the Atlantic Sun Championship.
“We were excited and had a little bit of nerves because we were the number one seed and we had an undefeated conference season,” Michael Beiler said. “We knew everyone was going to be out to get us which put a little bit of pressure. But, we were focusing on ourselves and trying not to worry about the factors outside. “
It was the first time the men’s tennis team was the No. 1 seed heading into the tournament and it did not disappoint. The Eagles picked up the first A-Sun Championship title for FGCU men’s tennis, and it will also be their first time competing in the NCAA Championship as a team.
“It is unbelievable, especially for me and Mike,” Tianyu Bao said. “When we came here, the program was not what it looks like now. The past four years we have seen how much it has grown.”
The victory is nothing short of what the team expected. At the beginning of the season,  coach CJ Weber took them into Alico Arena and said they needed to claim a spot among the trophies decorating the entrance.
“It was a dream come true,” Beiler said. “We were really fired up and it was definitely special. It was a moment I will never forget… It is definitely a cool reason to stick around campus. “
At 5:30 p.m. Tuesday, April 28, the team will discover who they will face in the first-round of the NCAA tournament on May 8. The selection show will be aired on NCAA.com
In the semifinal against Stetson on Saturday, the match was rained out. When play was suspended, the Eagles led 2-1. They secured the doubles point and senior Jordi Vives won in the No. 1 spot 6-1, 6-2.
On Sunday morning, they resumed play and earned the victory. Junior Eduardo Alfonzo won his match 6-4, 7-5 and Bao won in a close match. He lost the first set 6-7 (5-7) but came back and won the next two sets 6-1, 6-2.
The final match against UNF on Sunday afternoon followed the same pattern as the previous match. The match was rained out again. However, this time the team trailed UNF by one after losing the doubles point. Juniors Ricky Ventura and Lucas Vaz lost their match 8-7 and Bao and sophomore Andres Alfonzo lost to their competitors 8-7.
“That was the most difficult part of the entire weekend because you experience all these extreme emotions,” Weber said. “Usually it just happens over the course of one singles match where all those emotions are confined to a short amount of time. But, the rain delays extended the matches overnight and we experienced all that in a prolonged way. That was difficult to deal with. I was nervous myself as a coach, and I know if I’m struggling with it, the players definitely are.”
When play resumed Monday morning, Vives won his match 6-2, 6-4 and Michael Beiler defeated his competitor 6-3, 6-3. Andres Alfonzo and Bao lost to their competitors in two close matches. The title came down to Eduardo Alfonzo and Ventura.
“Just in general, I know the team was feeling very confident as it was unfolding,” Weber said. “Winning four of six first sets I think was massive for what we were trying to do. Fortunately we were able to win those matches in straight sets and the guys never wavered in the second set and avoided the distractions.”
Eduardo Alfonzo won his match 6-4, 6-2. Therefore, the tournament title came down to Ventura. He said he was unaware the match was down to him until Alfonzo finished his match.
“When we were playing, I was the first one to win the first set,” Ventura said. “When Eduardo was about to finish, I felt the pressure. I was like ‘Oh, I have to serve now to win the match.’ I was really nervous.  But, my teammates were all behind me and were helping me a lot.”
Ventura went on to win his match 6-1, 6-4 and was the A-Sun Tournament MVP. Eduardo Alfonzo and Jordi Vives also made the A-Sun All-Tournament team.
“To know that a conference title is on your shoulders is an immense out of pressure,” Weber said. “He was so focused and played brilliant in that last game. I am more happy with how he finished than anything else. He played not to loose and was going for shots and went for the win. It was total elation after that.”
Heading into the tournament, Vives was named the Atlantic Sun Player of the Year, and Weber was named Coach of the Year. Vives also made the A-Sun Academic all-conference team and first team all-conference. Beiler and Ventura also made first team all-conference.
Bao made second team all-conference in the No. 3 singles position. Eduardo Alfonzo and Vives made second team all-conference in the No. 1 doubles slot. Rounding out the recognitions was freshman Austin Bates, who made the all-freshman team.
With the conference championship under their belts, the Eagles will have a week off before they start practice to prepare for the NCAA tournament.
“I just really want them to enjoy this accomplishment,” Weber said. “We are not done yet, but we need to appreciate this moment… The next three weeks are going to be so much fun. We are going to have big-time, energy-filled practices and going to continue creating those pressure moments. We are not going to take it easy but the guys are going to love every second of this.”