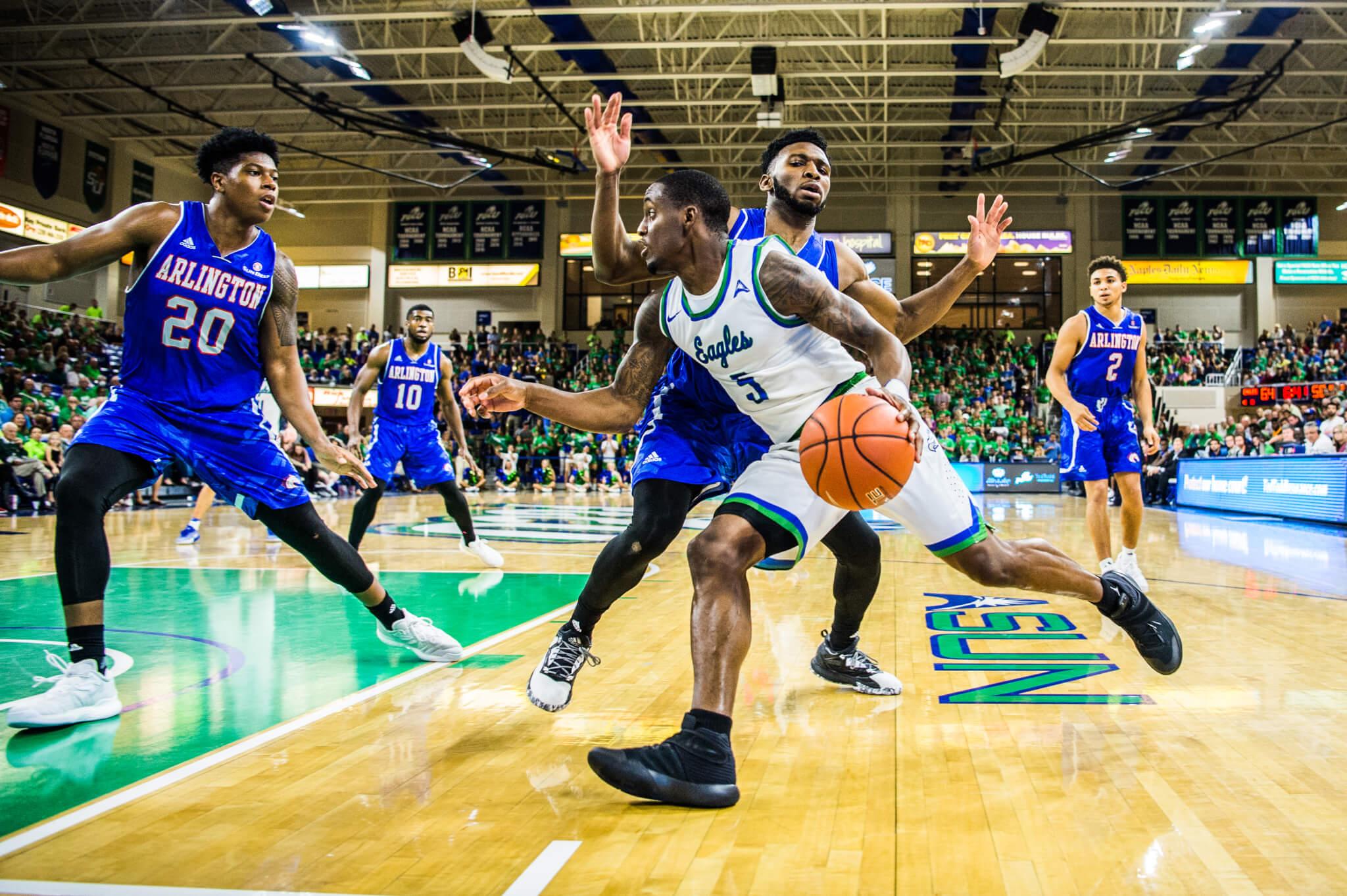 Combining for 48 points, the Eagles were led by Brandon Goodwin (24) and Zach Johnson (24) en route to their first victory of the season.

Playing his first game in front of a sellout crowd of 4,415 fans at Alico Arena — after sitting out last season due to NCAA transfer rules following his transfer from UCF in 2015 — Goodwin scored 16 of his 24 points in the second half, tallying four rebounds while shooting a perfect 5-5 from the charity stripe.

“I just wanted to go out there and have fun with my teammates,” Goodwin said. “It’s been a long time since I’ve been able to play. And, they got me pumped up, and I got them pumped up. And, we were just excited to get out there again.”

In a back-and-forth first five minutes of action, the Mavericks turned up the pressure on defense, playing a full court trap and crowding the paint to allow the Eagles no penetration, forcing them to shoot contested shots from behind the arc.

Behind 10 points from Drew Charles, UT-Arlington shot 60 percent from the field and 53.8 percent from long range while limiting FGCU to 1-12 shooting from behind the arc.

Despite nine points on 4-4 shooting from Demetris Morant, the Eagles were unable to overcome UT Arlington’s strong play on both ends of the court, going into the half down 44-31.

“I thought they put us back on our heels early,” FGCU head coach Joe Dooley said. “We turned it over eight times, and we didn’t think any of them were caused. And, we were just so tentative offensively.”

Shooting a dismal 8.3 percent from long range while trailing by 13 points at the end of the first, the Eagles came out of the intermission rejuvenated.

Going on a 9-4 run to cut their deficit to 8, the Eagles erased the Mavericks 13-point lead in the first 5 minutes of the half thanks to back-to-back threes from Christian Terrell and Goodwin, before Goodwin scored a lay in to tie the game at 48.

With just five points in the first half, Johnson came out of the half a man on a mission, leading the Eagles’ comeback with 19 points on 6-9 shooting from the field and 4-5 shooting from behind the arc, with one of his threes resulting in a four-point play after drawing contact on the shot.

“I just wanted to play more aggressive,” Johnson said. “Playing off of Brandon (Goodwin) Meech (Demetris Morant), CT (Christian Terrell) their energy and especially Rayjon (Tucker), they really just had great energy, and I just feed off of that. And, it worked out for us.”

Despite quieting down on offense after a 6-0 run by the Mavericks that brought the game within six, 70-64, with 3:48 left to play, good defensive stops down the stretch and clutch free-throws on the other end by Terrell, Goodwin and Johnson secured the win for the Eagles.

After going 1-12 from long range in the first half, FGCU rode 7-8 shooting from behind the arc to build a 13-point lead of its own, defeating UT Arlington 85-72.

After a quick one-game home stand, FGCU hits the road for a two-game road trip to face Baylor on Friday, Nov. 18 and Michigan State on Sunday, Nov. 20.

Video highlights from tonight's impressive comeback victory over UT Arlington in front of a sellout crowd at The Nest! #DunkCity #ASUNMBB pic.twitter.com/wjqvyCk4ff