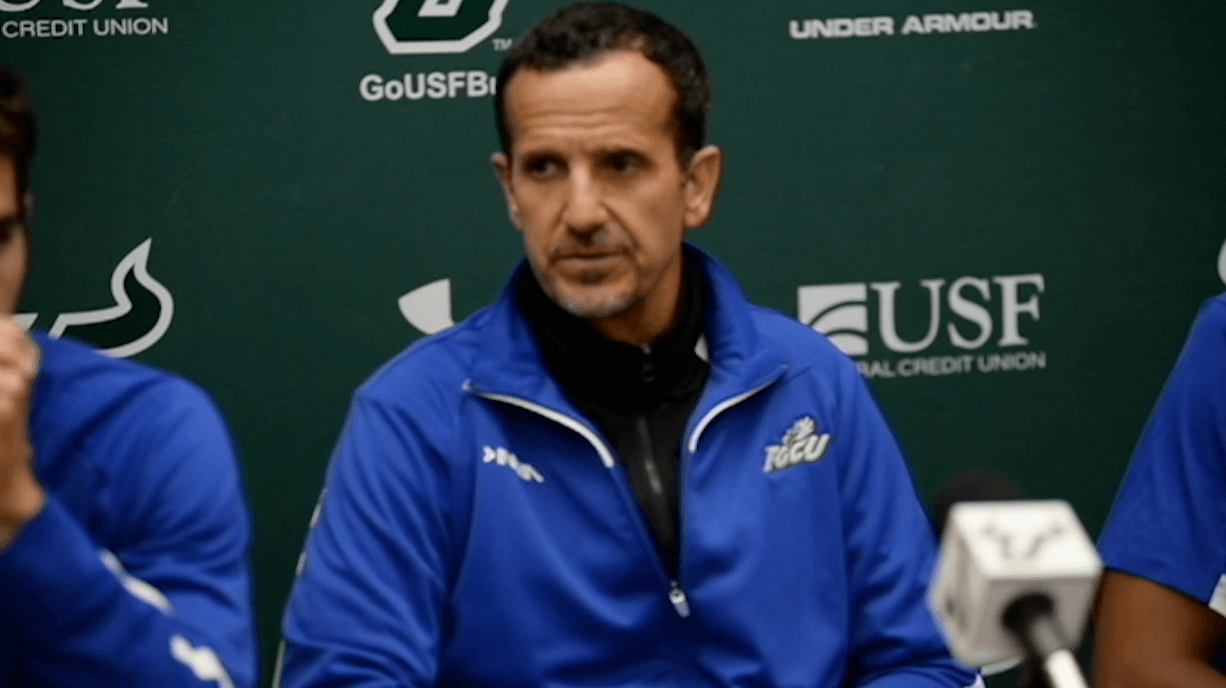 FGCU men's soccer head coach Bob Butehorn speaking in the pressroom after defeating USF in the first round of the 2016 NCAA tournament. (EN Photo / Katie Hopkins)

FGCU men’s soccer program-founding head coach Bob Butehorn has resigned from his position after 10 seasons to become the head coach at USF.

Assistant coaches Joe Dincecco and Henry Apaloo will be following Butehorn to USF. Eduardo Villarreal, who just finished his second season with the Eagles as an assistant coach, has been promoted as the team’s interim head coach.

Since the Eagles first season in 2007, Butehorn has coached six professional players and 63 ASUN All-Conference selections. He has guided the Eagles to four ASUN Tournament championships and NCAA Tournament appearances (2011, 2012, 2014 and 2016) all during the teams six years of D-1 postseason eligibility. The Eagles also won six-straight ASUN regular-season championships from 2010-15.

“This was an extremely tough decision for me,” Butehorn said to FGCU athletics. “I’m so thankful to have spent the last 10 years with some of the best people I’ve ever had the opportunity to work for and coach alongside. They’ve helped build the program, and I’ll forever be grateful to them. I’m leaving the program in a very healthy position, and I can’t thank the players, coaches and support staff enough for helping it reach that level.”

This past season, the program has reached record heights. The Eagles earned a program-record of 14 wins as part of a 14-4-3 overall record, a program-best 10-game winning streak in the middle of the season and a national ranking for the final nine weeks of the year. The program also had 11 showing in the NSCAA Poll on Oct. 18 and a 20 final ranking – the highest in D-1 history of any FGCU program.

Eagles advanced to the NCAA Tournament again, but the team broke into the second round by defeating USF in penalty kicks for the first time. In the game against North Carolina, the team fell short in double overtime, which was played in the College Cup.

Since the program’s first two seasons, the team has posted a winning record each of the past eight years, including double-figure victory totals in half of those seasons. Albert Ruiz, who is one of the three finalists for the MAC Hermann Trophy, college soccer’s equivalent of the Heisman Trophy, led the team in one of the team’s most successful campaign. The Eagles tied a program record with nine all-ASUN members this past season.

“We want to thank Bob for his tremendous tenure in building our program form infancy to one of the finest in the nation,” FGCU Director of Athletics Ken Kavanagh said. “Bob more than befits the phrase ‘left it better than he inherited’ and we certainly wish he and wife Cindy all the best as they embark on another exciting new chapter in their lives.”

“In turn, we will now commence a national search to find a new coaching staff that will maintain the high level of overall success that out program has established,” Kavanagh said.