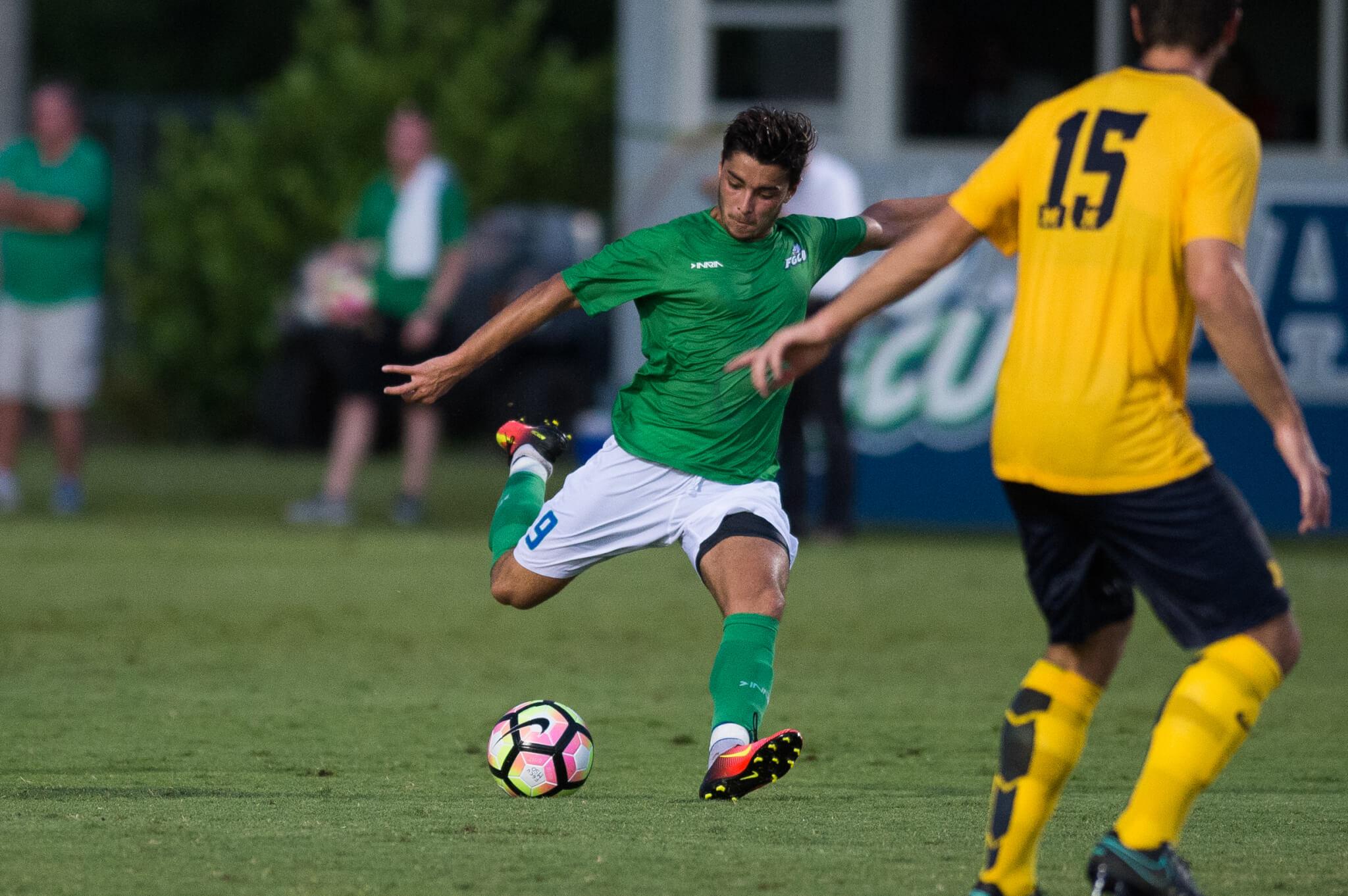 Coming home after a tough defeat to Northwestern on the road, the FGCU men’s soccer team fought back against Michigan to earn a 2-2 draw in double overtime in the team’s home opener Monday night.

“We came out flat in the first half,” Forward Dylan Sacramento said. “We paid for it and we went down two goals but we had our chances.”

In the first ever meeting of the two teams, Michigan dominated FGCU with ease early on. The Eagles seemed intimidated by their Big 10 Conference foe, failing to connect passes in each third of the pitch.

The Wolverines’ tough possession and aggressive attacking paid off in the sixth minute when Jack Hallahan found some space from about twenty yards out, ripping a shot past Sawyer Jackman to give Michigan a 1-0 lead.

FGCU’s sluggish form continued as a sloppy give away in the defensive third allowed Michigan to get on the board once again. Michael Kapitula took advantage of FGCU’s mistake, whipping a ball past the net to the diving head of Ivo Cerda. This put Michigan up two goals to nil after just twelve minutes of action.

After going down 2-0, the Eagles came alive with the introduction of Miguel Jaime in the 16th minute. Revamping their offense with passes in the midfield lead to an increase in the shot column for the Eagles.

Behind multiple efforts towards goal by Dylan Sacramento and Albert Ruiz, FGCU quickly fought their way back in the game as they went into the half down 2-0 despite a 10-8 advantage in the shots column.

“They were dead,” FGCU Head coach Bob Butehorn said. “I asked them, ‘do you understand what it takes to win a game and take a challenge like this? This is the second game in a row, you’re down 2-1 let’s see what you’re made of.’”

With the second half came a rejuvenated Eagle side. Seconds after the whistle sounded to indicate the second half, FGCU got to work with a shot by Jiro Tiyoma Barriga shooting a left-footed effort at goal go just wide.

After making just two saves in the first half, Michigan Goalkeeper Evan Louro was forced to make some big plays as the Eagles refused to get the ball out of the attacking third.

Besting FGCU players on multiple occasions, Louro came up big for the Wolverines as Ruiz struck a thunderous volley on goal which took a deflection by a Michigan player. Then, Louro was up to the challenge once again knocking the ball out of bounds.

The Eagles’ 15-8 shot advantage proved to be too much to handle for the Wolverines as their aggression on offense lead to their first goal of the contest.

The goal had been coming as @AlbertRuiz95 converts his 2nd PK of the year. Eagles down 2-1 with momentum pic.twitter.com/5oAMygZ9gd

After earning a corner kick, Sacramento whipped a ball into the box that was met by the head of a Michigan defender which landed at the feet of Shak Adams. Adams took advantage of the opportunity by dancing around the playe,r putting the defender on his heels as he took out Adams in the penalty area giving the Eagles a shot from the spot.

The penalty specialist, Ruiz, was the calmest man on the pitch as he slotted the ball to the keeper’s left to notch his second goal of the season and his seventh career goal from the spot to bring the Eagles within one.

“Having so many penalty kicks shows we play great soccer,” Ruiz said. “Everything is mental. I feel confident every time and my teammates have a lot of faith in me so I just go up there and make it happen.”

Inspired by cutting the lead to just one and the electric atmosphere at the FGCU Soccer Complex, three minutes later Miguel Perez played a ball to Sacramento who combined with Ruiz on a give and go to get a look at goal, scoring a low driven shot from 22 yards out to bring the Eagles level 2-2.

WE ARE TIED! @FGCU_MSoccer has pulled back to 2-2 as @dylansacramento finishes a brilliant team move pic.twitter.com/N83IuijU0s

Despite a quick rain shower gracing the pitch, the story of the remaining 20 minutes of the match was a goalkeeping exhibition as both men between the sticks made marquee saves to keep the score level at two a piece by the end of 90 minutes.

The themes of incredible goalkeeping and a little fortune continued into the first half of overtime. Louro and Jackman caught the best of attackers in the final third of the pitch, making a pair of saves in tight situations to keep the scores level.

Despite an effort from Shak Adams smacking the post with five minutes remaining in the first overtime period and a couple of opportunities for Perez that were met by the gloves of Louro, the teams went into the second half of OT deadlocked at two.

Shak Adams comes oh so close for @FGCU_MSoccer as his curler is deflected onto the post. Still 2-2 in OT pic.twitter.com/twRTUPXzPG

The revamped Eagles’ side continued to dominate possession in the Wolverines’ half. Their strong counter attack toward a ball that came across the box to his feet proved to be too much as he miss hit the ball into the hands of the Michigan number one.

One minute before the final whistle, Jackman sealed the draw for the Eagles as he got the better of Hallahan, despite conceding the first goal to him, saving his far post effort over the bar as the final whistle blew to signal the end of the match.

The biggest key for FGCU in its comeback effort was strong play off the bench for Butehorn as Perez, Adams, Zapata and Jaime played a key part in a strong showing for the Eagles.

“We’re a pretty deep team,” Butehorn said. “It was good for me to look down a bench and say ‘look here’s your role and do it’ and they did it exceptionally well. There was always a commitment to get back and retain the ball again, and for me that was exciting.”