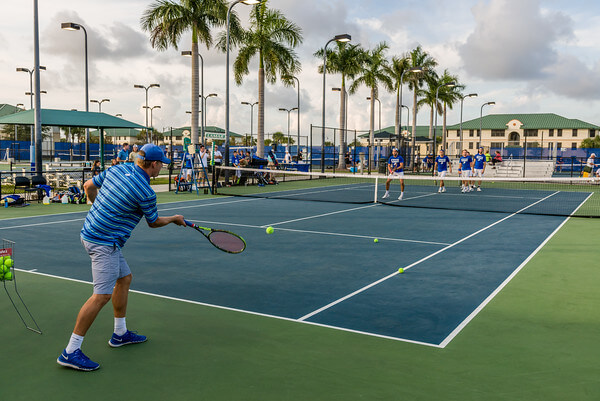 Finishing off their regular season, the FGCU men’s tennis team suffered a tough 2-4 loss to #34 Memphis after long-fought matches.

The Eagles pushed four of the six singles matches to three sets and claimed two, but wasn’t able to finish with the win.

“If we play like this next weekend we’ll be fine,” head coach CJ Weber said. “Hats off to Memphis for closing it out, but I was happy for how the guys fought today on Andy and Sam’s Senior Day.”

After doubles and going down a set on five of six singles matches, the Eagles quickly fell 1-0, however, FGCU was able to fight back in the second set.

Oliver Landert and Andres Alfonzo dropped tough matches at the No. 3 and No. 5 spot, making the score 3-0 in favor of Memphis.

Yet, this was short-lived as Ezequiel Cerrini came back to win the final two sets of his match 6-3, 6-2 to make the score 3-1.

As the day ended, freshman Felipe Ramirez earned his second victory after overcoming a 6-4 loss in the first set, but taking the next two 6-4, 6-1.

Mateo Ruiz also suffered from a 6-0 loss in the first set to only come back and earn a 6-3 win in the second. However, after cutting the score to 4-3 in the third, Ruiz ended the day falling 6-3.

Next, the No. 4 seeded Eagles will host the ASUN Championship. Play for FGCU will begin Friday, April 21 at 5 p.m. against No. 5 USC Upstate.